the smell of my desperation has become a stench
Nubbin

Fending off the body snatchers

The aliens have been waking Leta up at ungodly hours. We did what anyone would do to protect our child from their corrupt influence and have once again sealed off her room from their death rays. This way she will never see the sun again. 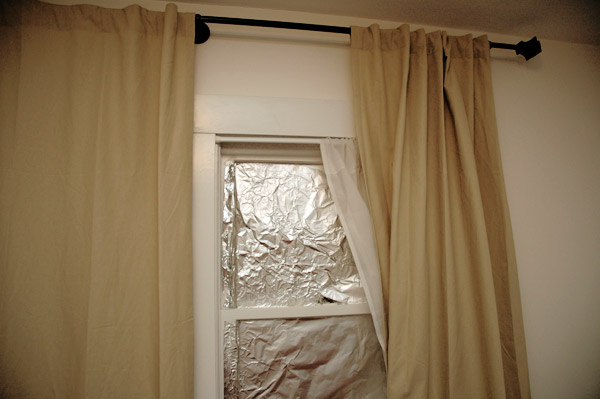 As Jon and I hung the tin foil in her windows on Friday night we felt a tad mischievous. She was going to wake up at 6 AM the next morning like she has been doing for the last month, but the appearance of the room would indicate that it was still the middle of the night. A small part of me felt like we were intentionally deceiving her. That small part kept asking whether or not our personal comfort was worth the lie. The much bigger, world weary part of me had the answer and it went something like this: SHUT UP ALREADY.

Like clockwork she woke up at 6 AM on Saturday morning. Jon and I braced for the screeching, but after thirty seconds of loud rustling she fell back asleep. She didn’t wake back up until 8:15. HAH! When I got up to go and get her I did a stylish moonwalk out our bedroom door and pumped my arms in the air like the pistons of an engine, a victory dance to signify our victory over the tyranny of a two-year-old who regularly sneaks into the bathroom to scratch her underarms with my toothbrush.

Email ArticleTwitterFacebookPin It
Leta Armstrong,Parenthood
Prev Sometimes I wonder if I was even in the room when this kid was conceived
Next In praise of my househusband