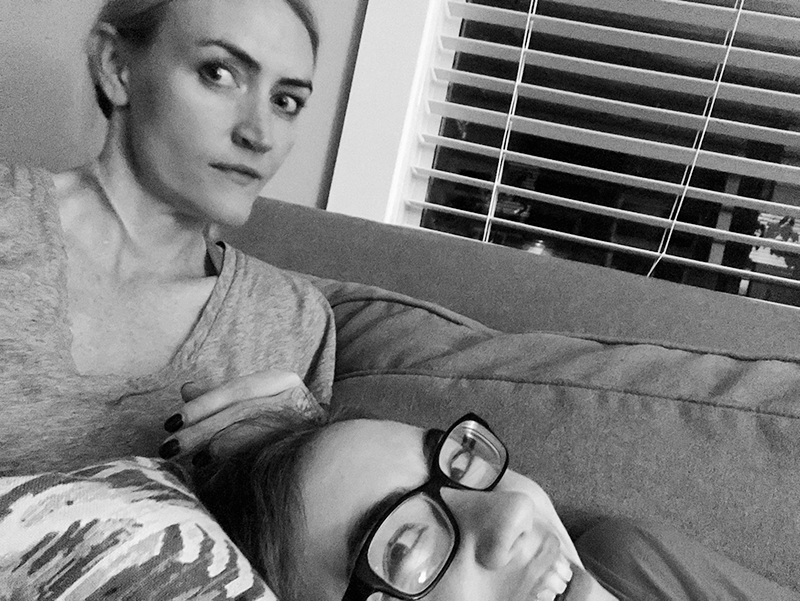 Marlo is going to be super jealous that I am giving her sister more space on this website than I have given her in recent weeks, and when she does I’ll just respond, “Remember when you used to pronounce BREAKFAST as BREF-DISK, and now you don’t? BAD MOVE.”

A few weeks ago I took both kids in for an orthodontic consultation on the advice of their dentist who said we’d want to catch some specific things going on with Leta’s jaw before she’s done growing—and here’s where DNA makes no sense. Leta is 5’3″ although her legs make her look like she’s twice that height. I was 5’9″ at her age (an inch shorter than I am now) and her father is 6’3″. Either the shorter side of the family kicked in or the next couple of years of Leta’s life are going to take place inside one giant bottle of ibuprofen.

Oh, wait. My dad was 4’9″ when he started high school and by the time he graduated he was 6’0″ and really, really angry about life. To give him the benefit of the doubt I’m going to assume those two things are related.

I’ve been mentally preparing for The Age of Orthodontics over the years when friends and family have shared how much they spent on two-three years of braces. And I remember my mother paying for the ones I wore for 22 months from the end of 7th grade to the beginning of 9th, years of my life that played such a vital role in hardening my character. Also, years of my life I’d gladly pay a bear to maul out of my head.

Leta has expressed some frustration with 8th grade dynamics and I told her, dude. No one has fond memories of 8th grade. NO ONE. Not even the ones you think are having a great time. They are pretending. And if someone genuinely did enjoy 8th grade? That’s when their life peaked and you do NOT want to follow them on Facebook or get their opinion on Pizzagate.

It’s not like I’m paying for a Tesla, but it’s also not at all similar to two bags of Corn Nuts that I found on sale for 79 cents WHY YES I DID AND I POINTED IT OUT TO THE GUY TAKING MY MONEY THAT I WAS GETTING A GOOD DEAL. I did not peak in 8th grade, y’all. IT IS ABUNDANTLY EVIDENT.

This post is in no way affiliated with Invisalign—although, hey, Invisalign! I am a mommy blogger who can be bought and sold! I can manufacture content with staged photos of unhappy and unwilling children like no one else!—and I bring that up because we had the option of going with traditional braces or going this route, a route in which a child can take the correcting instrument out of their mouths whenever they want and intentionally misplace it. Or intentionally place it straight into a dog’s mouth. Or intentionally set it on the ground and smash it with a rock.

I won’t say it again, the part where I have the best kid who ever lived, straight up, no contest, 100%, call Mueller and have him investigate. But as we looked at all the options I nudged her, pointed at the Invisalign and said, “I trust you.”

Her eyes got big and then I communicated through ESP, “You know about the evidence on my phone that I will one day turn over to TMZ, and then we’ll all bathe in one hundred dollar bills.”

That was three, four weeks ago? Please don’t ask me that. This morning I called Marlo “Coco” four times and was really mad that “Coco” wasn’t putting her shoes on already. READ MY MIND, KIDS. Jesus. Anyway, last week they called to tell me her trays had come in. So I took Marlo to school on the other side of town, came back here—the midway point—to pick up Leta, and then we headed down to the orthodontist on the other side of town. These details don’t seem like a big deal, except, Jesus. Yes. Jesus twice in one sentence! And now three times! THE SPIRIT OF GOD LIKE A FIRE IS BURNING! I am a child of God! Praise to the man who communed with Jehovah! Want me to go on? No? One last one: Popcorn popping on the motherfucking apricot tree!

The amount of driving that I do even though I work from home is a crime against this planet. I was working on my budget last week and realized that what I pay to gas up my car since we moved at the end of February has QUADRUPLED. The hell. I am in my car all the goddamn time chauffeuring those kids around town. I know I am not alone in this frustration—albeit totally privileged frustration I HAVE A DAMN CAR—and I sent a fellow single parent a text last night and the automatic reply on his iPhone popped up: “Driving. I won’t hear or see your text.” A few minutes later he texted, “Driving. I won’t be able to stop driving until I am dead.”

If I take a little longer than usual to answer your text it is because I am screaming obscenities at some imbecile in front of me on South Temple who suddenly decides out of nowhere that they want to make a left turn. And I have murdered them. And I’m in prison.

Leta got her first 12 weeks of Invisalign trays yesterday, and I sat at her feet as the orthodontic assistant performed all the installation mechanics in Leta’s mouth. We walked out an hour later with a whole bunch of equipment and instructions. I guess I should say, Leta skipped out as she was overcome by the excitement of it all, by the idea of reaching this milestone in her life. She asked me how badly it was going to hurt over the next few days, and because she was still so excited I lied and told her that she’s only going to feel a little pain when the truth is SHE WILL WANT TO CLAW HER OWN FACE OFF.

She’d already missed over two hours of school, so we hurried to the car and jumped in to escape the freezing wind. And that’s when the whole thing sort of turned into a strange waking dream. During the entire drive to her school I felt like I was watching us from outside the car, like I was witnessing an actor playing out the role of a mother who suddenly realizes she’s losing the grip on the baby who once kept her awake at night when hiccuping inside the womb. I could feel the clutch of our two hands loosening, and this whole woozy reverie was made even more surreal by the golden leaves caught in the wind, flying in every direction, like someone had tossed a barrel of yellow fabric in front of a wind machine.

I even said to her, “This has been the most spectacular autumn I can remember.” And if you follow me on Instagram or Facebook you know her immediate response was, “Aw! The Grinch is growing a heart!” A response from a human who understands and can wield sarcasm. That turd.

This has been one of the most spectacular autumns I can remember and when I said that to Leta on the drive to school this morning she said, “Aw! The Grinch is growing a heart!”

Once we arrived at her school, we both ran in to escape the cold and I signed her in at the front office where three very awkward middle school boys were huddled and mumbling something about one of their moms. Leta grabbed her sign-in slip and dashed out of the office before I could even get in a hug. I ran out after her to find her running up the front staircase to her third period class and called out, “Hey, I don’t even get a handshake?”

She glanced back, rolled her eyes and moaned, “Moooommmmmm.” With a period. No exclamation point. Lowercase. Italicized.

I pushed the heavy front door open and saw another swath of golden leaves fly by. And I started crying. Tears just poured out of my eyes. It was a totally involuntary response, one that had me biting my lip to keep it from trembling. And it wasn’t because I felt that she had rejected me, no. Not at all. I was just overwhelmed with the almost incapacitating love I have for that human being bounding up the stairs away from me.

Away and up and forever the singular person who first owned the entirety of my heart. And always will.