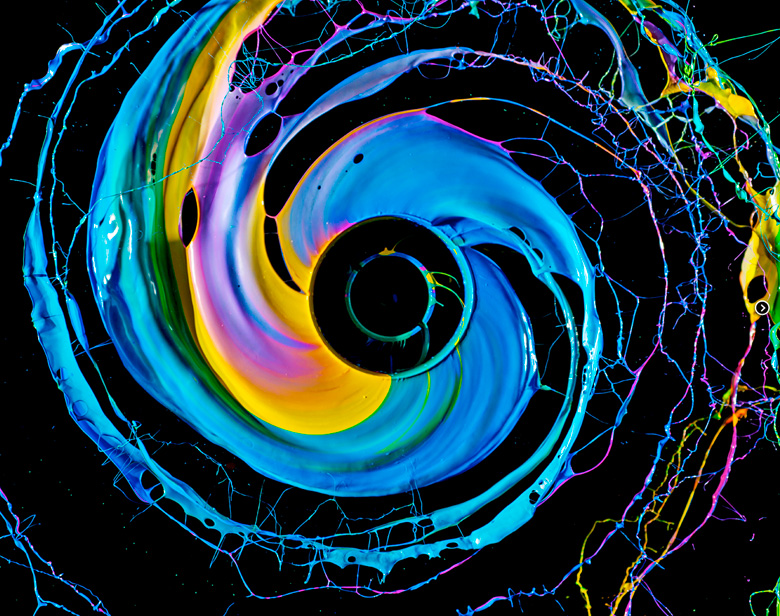 – Fabian Oefner Photography: “Black Hole is a series of images, which shows paint modeled by centripetal force. The setup is very simple: Various shades of acrylic paint are dripped onto a metallic rod, which is connected to a drill. When switched on, the paint starts to move away from the rod, creating these amazing looking structures.”

– A gallery of death by snack overindulgence

– How Ellen DeGeneres Helped Change The Conversation About Gays:

“That scene is just so beautiful, because there’s nothing like telling someone you’re gay and then it goes silent,” Halem says. “But for her to say, ‘I’m gay’ and it’s a laugh line, and you know it lets us laugh, it lets us release some of the anxiety.”

– “My goal is to make people feel as uncomfortable as possible as they listen to me describe to someone on the phone exactly what they are doing and what they look like.”

– The Battle We Didn’t Choose

– Infographic: The World as 100 People

– “Watch the slow creep of spring as it pushes the cold hand of winter back to the frigid north … only to succumb again next year, of course.”

– UK-based scientists have designed an ‘intelligent’ microchip which they claim can suppress appetite:

The chip and cuffs are designed to read and process electrical and chemical signatures of appetite within the nerve. The chip can then act upon these readings and send electrical signals to the brain reducing or stopping the urge to eat.

– 21 Vintage Easter Cards That Will Totally Creep You Out

– Robbie Rogers: why coming out as gay meant I had to leave football:

“Life is simple when your secret is gone. Gone is the pain that lurks in the stomach at work, the pain from avoiding questions, and at last the pain from hiding such a deep secret.”

If you think kids aren’t racist, ask one to quote the donkey from Shrek sometime.

If it please the court… *rolls baby hedgehog across courtroom on skateboard, jury erupts with applause, opposing counsel breaks pencil*

I buried a time capsule when I was 9. This is the year we are going to dig it up.I can’t wait to see how big my puppy got.

If I could be an animal I’d want to be a spider because I’ve always wanted to know what it’s like to build a place to live with my butt.

“Oh, this old thing?” -Someone who can’t take a compliment on their grandma

Son your teacher called, she said you wrote “AQUAMAN RULZ” all over your math test. [sigh] First of all, Aquaman doesnt have any good powers

Can we talk about the word “queue”…How many of those letters are really necessary? I count one.

A 3 minute fart would actually make it on my resumé.