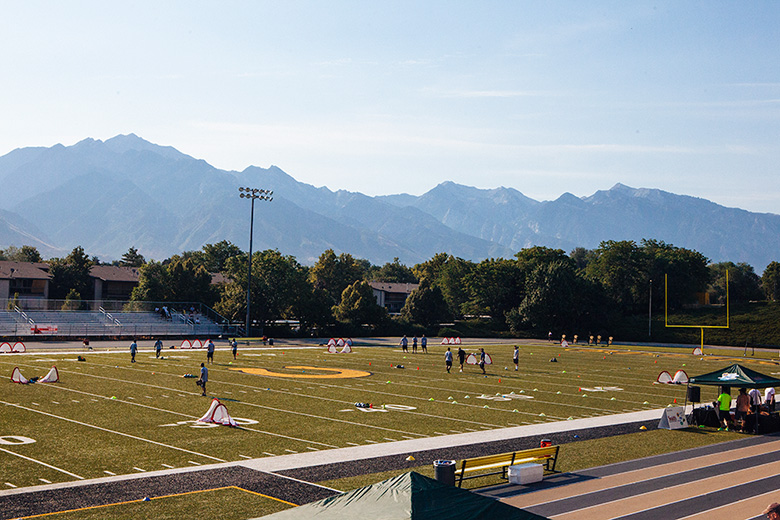 A few weeks ago I took Leta to a three-hour ProCamp soccer clinic held at a local high school football stadium, one that would feature exclusive instruction from Álvaro Saborío, a forward for Real Salt Lake. For those of you who have been following the various stories I have told about my older daughter since her birth you might grasp the significance of this experience, and it has absolutely nothing to do with being in the presence of a professional soccer player. Let’s be honest, that part was a thrill for her mother. Well, I mean… I watched hours and hours of The World Cup just for the articles.

(Many thanks to Michael Van Dyke of Bell Photographers for this photo of me researching an article.)

Some of you might remember the years Leta spent in physical and occupational therapy for severe gross motor delays and low muscle tone, the two MRI’s ordered by her pediatrician to inspect the condition of her brain and spine. At two months old she was diagnosed with Torticollis Plagiocephaly, a term that seems like just a bunch of vowels and consonants haphazardly thrown together but signified major problems with the shape and development of her head and neck. By nine months old she was still refusing to put any weight on her legs. She didn’t walk until she was two. At age four when we spent a week on a beach in Florida she only once agreed to put her feet on the sandy beach, the night before we left.

My child is drawn to books and art and writing elaborate fictional stories. She could identify every letter of the alphabet at twenty-two months old, before she could walk. She has a natural talent for piano playing and befriending any child who feels left out. None of these qualities is necessarily mutually exclusive of athleticism, but she has not ever expressed any interest in sports. She would much rather read a story about someone else throwing a ball than being in the same room as a ball. And then she’d brag that she could write a better story.

She has plenty of friends who participate in soccer games twice a week. In fact, we recently spent a week in a cabin on a lake with two of those friends, Harry and Ella, who play soccer quite competitively. Their mother Carol is always texting me about the stress of it all: driving one kid to practice hoping that she can get the other to a game on time, try-outs, stubborn coaches, and team dynamics. There was a lot of talk that week about soccer, and I could have shaken my head and asked her why she continued to keep her kids in this activity when it was the source of so much chaos and anxiety. But I knew the answer already. It’s the same one I give when people ask me why I continue to pay for Leta’s piano instruction. One, she’s good at it. And two, these activities are fantastic tools for teaching our kids about hard work. They fortify their character. They’re a lot like vitamins in that they build strong bones.

At least, when they aren’t breaking those bones:

Carol sent me this photo with the accompanying text a couple of weeks ago: “Harry’s had three soccer injuries in the last nine days. Broke his wrist, thumb and damaged the growth plate in his big toe. Can you say Walking Wounded?”

Harry is in good company, it turns out. Álvaro Saborío broke the fifth metatarsal bone in his left foot during a training session and was unable to join his native Costa Rican team in the World Cup.

That’s a truly disappointing course of events given how well the Costa Rican team performed, but it in no way takes away from the success Saborío has seen in his career which includes stints with FC Sion, Bristol City, and now Real Salt Lake. Since joining RSL he has become their all time leading scorer. When I told Leta about the opportunity to meet him and play soccer with a field of other kids she shrugged and said, “Sure.” It wasn’t a jubilant or enthusiastic expression, but given her history or, I guess, lack of history with sports, it was a step in the right direction. Let’s give her some credit: her face did not melt off.

In the days leading up to the clinic, however, she started to become a little nervous about it. Would there be other kids there who didn’t know how to play? Would she be the only one? Would she figure out how to maneuver the ball? Those were just a few of a long list of worries that began to snowball, and when we pulled into the parking lot of the high school she didn’t want to get out of the car.

“It’s really hot out there,” she said when I asked her to tell me what was on her mind.

“It is, I know.” She was trying to deflect the conversation away from what she was really feeling. So I tried to offer some comfort. “There are kids of all ages here, all skill levels. Some have played on teams, others are here to learn like you.”

“Absolutely! It’s a clinic. The people here are doing this to teach you.”

“But…” she trailed off and looked down at her hands.

“Leta,” I said reaching back to touch her knee. “I know you can do this.”

“Leta, you got in a kayak and paddled around a lake by yourself. You went tubing behind a boat. You touched worms and caught fish. YOU ATE A BRATWURST ON A BUN. Kicking a soccer ball will be so easy compared to that bratwurst.”

I managed to elicit a momentary smile from her, and then she reached for the door handle. Tiny steps.

I held my hand in the small of her back as we stood in the registration line and occasionally rubbed the back of her head as a gesture of reassurance. She would whisper a few times, “I’m worried.” And I would nod and tell her that I understood. After finding our way to the field, we stood on the bleachers and waited for everything to begin. She reached down and squeezed my hand.

“All the six-year-olds!” the announcer bellowed through a microphone. “Six-year-olds to the field!”

Leta continued to grip my hand. We watched the seven, eight and nine-year-olds run out onto the grass, and when they called for the ten-year-olds, the kids who came screaming into this world a decade ago and changed the hearts and lives of their parents forever, she took a deep breath and looked up at my face. I gave her a huge smile and said, “I’m already so proud of you.”

She let go of my hand, ran down the steps of the bleachers and out onto the field, my child who refused to walk now sprinting with both legs.

I won’t lie. It was really hot out there. And as organized and friendly and understanding as all the coaches and teachers were, they put them through a set of drills that I was certain would exhaust her into an eventual meltdown: dribbling, passing, attacking, shooting, and juggling not to mention all the running. There was a little downtime between stations, and each time I’d find her face in the crowd and point my thumb up and then down to ask her how she was doing. Only once early on did she shake her hand from side to side to indicate that she was “so-so,” and then I guess she started talking with the other kids and the coach of her group. I think she started to get a feeling for the ball and the grass beneath her because every other time she gave me the thumbs up. So happy I was that she wasn’t sticking out her tongue and  pretending to shove her finger down her throat.

Three hours later—three hours of 95 degree heat with not a cloud in the sky, three straight hours of intense and technical exercise—she passed me to grab her pizza lunch. I ran out and hugged her as quickly as I could and asked, “How are you?” Except in reality I think I may have repeated that question four times and sounded like the sky was falling right on top of our heads. And it was made of bricks.

She grinned when she saw me and answered joyously, “It was really hard! Like, really really hard. BUT I DID IT! I REALLY DID IT!” She said it so fast I almost didn’t catch it.

“YOU DID REALLY DO IT!” I yelled after her, and then I turned around in circles looking for someone, anyone who would understand the significance of this, the physical AND emotional significance. The hours I used to spend holding her feet in a bucket of rice, how she’d scream when she felt the grains between her toes. The years we spent in stubborn stand-offs about food and and sleep and everything else in between. Nothing was too insignificant to let go, not even the brand of the shampoo I bought that was different from her normal shampoo. She would not. She could not.

And then I found that person standing in line to get a piece of pizza. She waved at me and I waved back, and then she cupped her hands around her mouth so that I could hear her yell, “I AM SO PROUD OF MYSELF!”

I don’t normally like to break the… wait, that expression isn’t right here. “Breaking the fourth wall” is about addressing you, the audience, and I do that all the time (hi, Tish!). Maybe there doesn’t exist an expression for this so let me just get on with it. Yes, this is a post sponsored by Citi, I am acknowledging that, but what she expressed and continued to express for days about her courage was so visceral and real and triumphant. I am going to print this out with all the photos and am going to put it in the journal she keeps next to her bed so that whenever she’s feeling uncertain or insecure or doubting any of the outstanding character she has already assembled she can pull it out and remind herself that she really did it.

This post is sponsored by Citi. To learn more about access to the best in live music, sports, dining, family entertainment and more with an eligible Citi® credit card or Citibank® Debit MasterCard visit http://www.citiprivatepass.com.  To get involved in the conversation happening right now with Citi and sports camps visit www.closertopro.com.