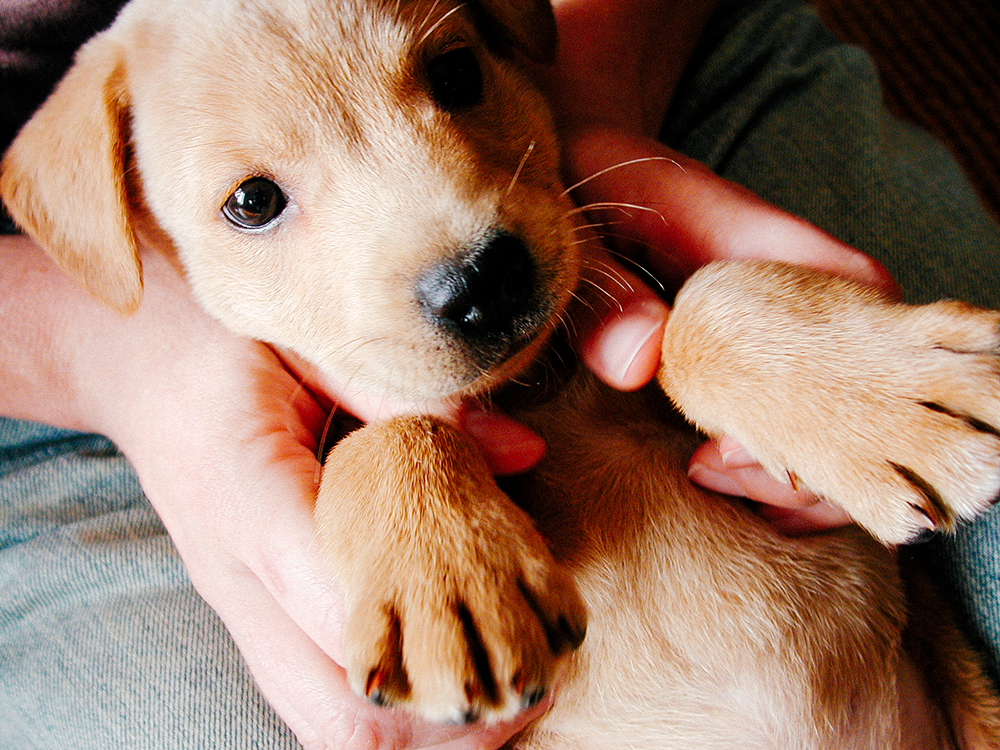 In the spring of 2002 just a few weeks after bringing Chuck home from the Pasadena branch of the ASPCA, I was trying to make a cup of coffee while he darted around my feet trying to bite my ankles. That dog was a motherfucker as a puppy. He may have looked innocent and adorable, but he destroyed shoes and underwear and chewed on furniture and routinely flipped over his water bowl on purpose. Yelp review: Total asshole. Needs to be flicked in the nose. One star.

At the time I used a French press and had to grind the beans each time I made a pot of coffee. And that morning while trying to avoid his sharp teeth without kicking him and committing some sort of inhumane violation of his rights, I accidentally spilled an entire bag of coffee beans. Why I didn’t feel an immediate sense of urgency WE WILL NEVER KNOW but before I could grab the millions of beans that had scattered all over the kitchen floor he had eaten at least a hundred thousand of them. Just gobbled them right up. Like a canine Roomba.

What happened next would be one of the worst six-hour periods of my entire life.

Thankfully he grew out of his douchebaggery—wait. Tangent. Sorry, that just reminded me of A Moment in Terrible Parenting® in which I instructed Leta to respond to a message on Snapchat with, “You’re a douchebag.” Yeah, oops. But get this asshattery: Some kid at school thought it would be funny to spoil the ending of season two of “Stranger Things” when we’d only seen the first episode. She saw his post on Snapchat on the way to school one morning and was totally gutted. Like, completely devastated. She had been eagerly awaiting this season for over a year, and just like that he ripped the fun of it all right out from underneath her. Be glad I didn’t tell her, “Punch him in the balls.”

She asked what she should say to him, and initially I told her to ignore him. But she was really irritated and wanted him to know that what he’d done was not okay. How should she say that.

“Ask him, ‘Why did you not warn that this would be a spoiler? Some of us haven’t finished the show.’” I told her. And so she did. We hadn’t even driven two blocks before he answered her.

“LOL. Cool, huh.” That was his answer. I’m just going to go on record here and say that eighth grade boys are the worst people in the world. Not yours, of course, but the rest of them are.

She wanted to respond to him and, again, I told her to ignore him. He obviously wanted to get a rise out of anyone who saw that Snapchat, and she was giving him that satisfaction. She was insistent, though, and I told her that no response was going to make him understand what a horrible person he is (YOU KNOW I AM ONLY SPEAKING THE TRUTH), so I flippantly said, “If you’re going to say anything just tell him, ‘You’re a douchebag.’”

“You’re kidding, right?” she asked, surprisingly shocked. I mean, how long has she been living with me? What did she think I’d tell her? Send him thoughts and prayers?

She shook her head and laughed, which was a relief given how distressed she was. We’d pulled up to her school at that point, and as she got out of the car she said, “I think I’ll just ignore him.” Because she is a far better human than I am.

END OF TANGENT SO WE CAN GET BACK TO BABY CHUCK PHOTOS.

In 2006 I invested in a professional-grade coffee machine, and I say invested because it was the first purchase I made for my business and it cost an insane amount of money. They don’t make my model anymore, but this Jura IMPRESSA is what I’d invest in if you’re considering doing the same. I know, your jaw hit the floor when you saw that price. Except, let’s do the math: my coffee machine still works. It’s been 11 years since I bought it. That works out to about $100 per year. I use this thing every single morning. Let’s say I make 300 cups of coffee a year. That works out to about 33 cents for each cup of coffee I drink. For shits and giggles let’s just double that price to include the beans. That’s still less than 75 cents for a professional grade cup of coffee coming from a machine I DO NOT HAVE TO JUSTIFY BUYING BUT ARE YOU FAMILIAR WITH THE INTERNET.

Today I have had three cups (that adds up to $2.25 if you’re following along) which could explain the capital letters, although I haven’t used enough exclamation points. I’m doing caffeine wrongly.

This machine grinds the beans for you (it also gives amazing blow jobs), and this morning as I was refilling the trough that holds the beans I spilled a small handful on the floor. That this isn’t a more frequent occurrence WE WILL NEVER KNOW because I am the clumsiest person you will ever meet. This characteristic of mine did not come in handy when dating a certain person who was so psychotically jealous that he’d interpret any bruise on my body as “a bruise inflicted by someone else during rough sex.” Yeah, dating is not fun! There’s the exclamation point! There’s another one! And another! NOW I AM NOT DOING IT WRONG.

I was always like, what? This bruise on my head that I got from leaning down to pick up Marlo’s laundry only to impale myself on the doorknob of her closet? Yeah, no. What really happened is I like to be hit in the forehead with a stapler during intercourse or I can’t orgasm.

I think that was a tangent. Yeah, that one was for sure a tangent.

When I heard those beans hit the floor this morning the PTSD of those six hours from 15 years ago kicked in, and I scrambled. And you have to with Coco because she is a master when it comes to catching food before it comes within a foot of the floor. Just ask Marlo who has more than once decided she did not like the meal that I had cooked and instead of simply not eating it she held her plate out over the floor and turned it over so that the food could fall straight into Coco’s throat.

I thought I had gathered the few beans I’d spilled when Coco dashed across the tiny kitchen. Next I heard a very faint “crunch” followed by another “crunch crunch” and then she acted as if someone was tickling her tonsils with a spoon. Her entire body convulsed and, how do I even describe it? She hocked a loogie. A very black, crunched up loogie.

Listen, I’m glad she spit it out, do not get me wrong. A cracked out miniature Australian Shepherd might be less fun than dating—MIGHT BE—but just yesterday she pooped, turned around and ate one of her fresh, steaming turds. Like she’d just pooped out a Kit Kat. Yep! She’s still doing that! I’m not going to be as judgmental as the Internet is going to be with me when they realize that had I not bought that coffee machine I could have instead solved world poverty all by myself, but maybe when god was making herding dogs she/they thought, “These things aren’t annoying enough. How else could I make them more awful?”