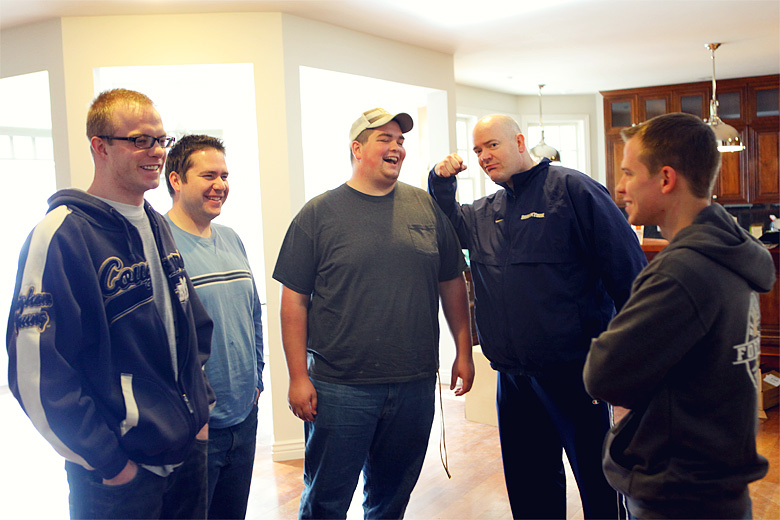 A little over ten years ago when I moved from Los Angeles to my mother’s basement, I had to hire a moving company to transport every object I had amassed between the two states. It took three days to pack up the apartment, most of it a ridiculous wardrobe of clothing that made sense to wear at a cafe in West Hollywood. Not so much in a grocery store in Draper, Utah. I’m looking at you, turquoise tank top that I’d wear without a bra to the office. Listen to me, kids in your twenties: you’re going to look back at these years and remember the fun, yes, but you’re also going to look back and think GOOD LORD GOD NO WAY MAKE IT STOP. Put on a bra, YOU.

Those movers gave me a quote somewhere in the $5,000 range. Yeah. Insane. I had to empty my savings account and then borrow more money when they called and said, oops. We thought all your stuff was going to weigh THIS but actually it weighs TRIPLE THIS. Damn those five-pound textbooks form college that I cannot part with.

I will say it again: I am rather fond of diagrams of cellular mitosis. I’m willing to pay to transport them.

I now own approximately seventeen hundred million percent more things than I did ten years ago, and yes, I am partly to blame, but come on. Kids come out of the womb with 3,000 pounds of gear. They plop out with breast pumps and strollers and burp cloths and air filters. And all that stuff multiplies and fills every empty space like water seeping into cracks. Like a contagious disease on a crowded subway train. We are all going to die. Sorry. Spoiler.

It is no secret that the last year and a half of my life has been difficult. It’s been a lot like my freshman year of college when I called my mother at least three times a day in hysterical tears. It’s been exactly like that. And I hope that if either of my daughters ever need me the way I have needed her that I can give them what she has given me. Well, I can’t put their names on the prayer list in the temple because I’m not allowed inside. So I guess I’ll just have to break in. And hope my insurance will cover “struck by lightning.”

My mother knows that moving and the chaos of stuff being scattered everywhere is a huge trigger for me, so she came to me and said, look. You are not hiring movers. Remember what it cost you to move from Los Angeles? Multiply that number by seventeen hundred million percent. Why spend that money when there are boys attending BYU who could help you, and in doing so they are scoring points toward owning their own planet? YOU are helping THEM.

You guys! I am an instrument of God! I am furthering the cause of righteousness! This is not nearly as gross as I thought it was going to be!

She organized everything. Every single thing. Maybe she’s been bored since she retired from Avon, and here was this massive project she could manage. And now I understand how she was so successful. She gathered my entire immediate family, a few cousins and their strong friends from BYU, and Dane and Tyrant. Over the course of a week she and my stepfather would spend a few hours here and there helping me pack rooms and books and clothes. My father and stepmother came over and packed up a couple of bedrooms. When my stepmother found my drawer full of gay porn she didn’t even judge me out loud.

And then moving day. We rented a 16-foot truck, and the guys started moving the furniture from the top floor of the old house and made their way to the basement. They’d fill the truck and head to the new house where I directed and helped unload. In total they made five trips. The whole house got moved in four and a half hours.

Did you hear that? Read that part again. They moved me in four hours and thirty minutes. Next time the Mormon missionaries knock on your door? OPEN IT.

To thank everyone for their help we all took a break before the fourth trip and had a pizza party at the new place. I ordered 14 large pizzas and a few liters of orange soda and Diet Coke, and then we sang hymns because they were all that much closer to being planet owners!

When I moved out of my first house I was so done carrying around all that crap that I rented a 17-foot dumpster and filled it to overflowing with I don’t even know what. An old futon mattress? A shelf missing all its screws? Paint cans? My dignity? Point is, I participated in a lot of waste. A LOT. So much that I’m probably 40% responsible for global warming, and oh. Al Gore just called. He’d like to have a word with me.

My mother wouldn’t allow me to rent a dumpster this time. Instead, we donated everything I didn’t need to charity and properly disposed of old electronic equipment. My mother did not want to waste anything. If you extrapolate this value of hers it shows that she likes to conserve. And then if you extrapolate that value further I bet you she has a crush on Bill Clinton. My mother. She is a closet liberal.

Cleanup after the pizza party followed this theme, and during the week leading up to the move my ad partners asked if I’d be willing to highlight the GLAD® “One Bag” campaign that aims to bring awareness to sustainability and waste reduction. It was a total no-brainer because one, I already use GLAD® products, and two, we were going to be having a mid-move pizza party hosted by a project manager who demanded at the outset that we waste as little as possible. After everyone ate their pizza we managed to get all 25 paper plates and napkins and plastic knives and forks into a single garbage bag. All the pizza boxes got recycled. There I was participating in conservation with my family. Is this what it’s like to sit down at dinner and drink a glass of wine IN FRONT OF YOUR PARENTS?

In other news, I know exactly what I’m going to get Marlo for Christmas.

The move from Los Angeles when I was unemployed ended up costing over $7,000.

This move? I paid the following:

I cannot thank my family enough. YOU did this. You are amazing, wonderful people and I want the world to know.

This post is sponsored by GLAD®. Small changes can make a big difference. Here’s another family who successfully took the “One Bag” challenge.