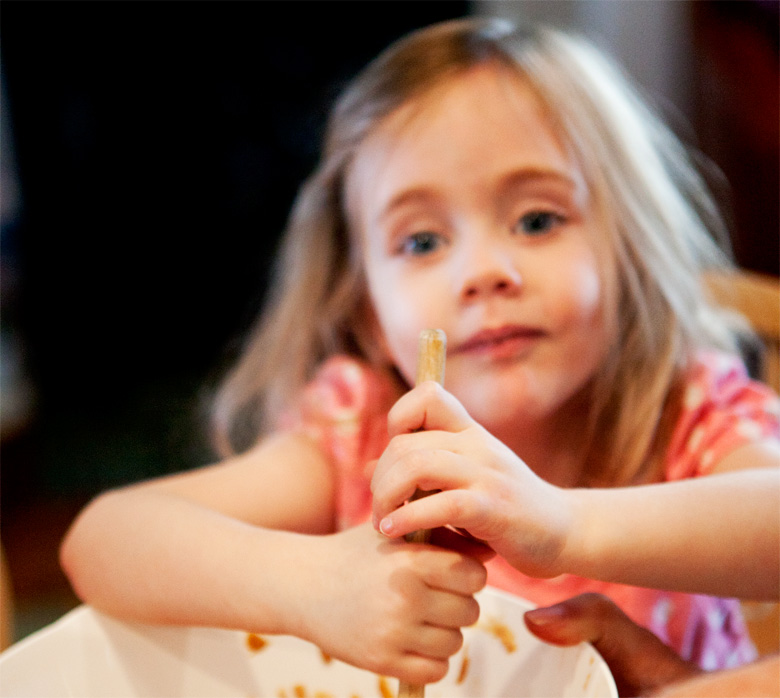 My mother invited me and the girls to her house for lunch on Sunday because I had mentioned that every attempt to schedule a play date for Leta had hit some sort of wall. SERIOUSLY. Listen up, and I am not even joking:

Being a kid these days is total crap.

Kids have to schedule playing time. They don’t walk to the neighbor’s house anymore, knock on the door and ask if Courtney can play. Courtney now lives across town, and Courtney’s mother has to coordinate with the other mother to determine a time and place and there are cars and drop offs and pick ups and a debriefings wherein each party assesses whether or not the play date was exciting enough to warrant all that work. I’m exhausted simply from typing all that.

Also, where are all the Courtneys? There are no more kids being named Courtney. Gone are the Jennifers and Tiffanys and Stephanies. Gone are THE HEATHERS.

Where was I. PLAY DATE. Right.

Leta woke up Sunday in a morose mood because she knew that it was going to be the most boring, most horrible day ever. Why? No play date. Part of me wanted to start ranting about Camp Africa where kids her age eat bugs, but I was mostly heartbroken for her. It’s sad. When I was her age my mother just shoved me out of the house when I got bored. There were at least four girls on my block who would be home and we’d dress up like Madonna and kiss pillows.

When I told her we were headed to Grandmommy’s for lunch I thought she’d perk up, but her frown grew more severe.

“What are we going to do there?” she asked, her arms crossed tightly across her chest.

“We’re going to scratch my butt,” I answered. She hates it when I do this, but I can’t help myself.

“Listen,” I said. “I promised Marlo a few days ago that we could bake cookies together. The kind of cookies where you stir stuff in bowls and measure ingredients with little cups. You can help us with that.”

She was holding back the urge to groan. “That sounds like the most awful thing ever.”

Well, that apple didn’t fall far from the tree!

Before we headed out I googled a recipe for a cookie that wouldn’t require a doctorate to figure out, and then I remembered that my sister used to make ones out of peanut butter when I was a freshman in college and SOMEHOW I gained twenty pounds in one semester . Didn’t take long to find it online:

Do you SEE me getting crafty? Look at how awesome that is. BEHOLD IT. The Christmas Spirit is alive! And it has taken over photoshop!

You can, Marlo. But only if you say, “Sally selling seashells by the seashore.”

Ok. So. I have never attempted to bake anything in the presence of my younger child. Why? Because wrestling a pig in a puddle of mud does not sound like fun to me. Which is why I needed the assistance of my mother, and boy am I ever glad she agreed. Because Marlo was one coked out pig. She could not have been more excited to bake cookies. Her sister, however, was just a little more subdued.

Leta remained in that chair from the moment I got out and organized all the ingredients up until the squealing from Marlo interfered with her ability to concentrate on her game.

Marlo stirred, she measured, she poured, and then she stirred some more. Leta finally perked up when it came time to crack the egg. Maybe because it’s a little more scientific than stirring, I don’t know. But, thank you, egg! Thank god you were a part of this recipe. Because you got my kid to stir ingredients and stick her hands in batter. Egg, would you like to come over for a play date? I can pick you up.

The recipe says it will produce 48 cookies. However, Marlo was so enthusiastic about rolling the dough into balls that instead of 48 one-inch balls we ended up with about 200 quarter-inch balls. Unlike the Internet we didn’t tell her that she was doing it wrong. We just took the balls from her and combined them behind her back. We deceived her, like people do in real life.

I’m sure the presence of my mother had everything to do with this, but these cookies turned out better than the pictures I saw online. And they tasted just as good as the ones my sister used to make. Success! The kids agreed and we all lived happily ever after!

PLEASE LISTEN FOR THE SOUND OF THE NEEDLE BEING DRAGGED ACROSS A VINYL RECORD.

Marlo did not take a nap that day, not with the adrenaline rush of first-time baking and consequent sugar rush of four peanut butter blossom cookies. And then five minutes away from home she fell asleep in the car. Like, OUT. She totally crashed.

I decided that I’d let her sleep for a little bit, so I took Leta inside along with my purse, my camera equipment, and the bag of ingredients left over from our activities. The bag of ingredients that included the flour I had originally found in my kitchen. Flour that was locked inside a ziplock bag. Flour that had no business being anywhere outside of that ziplock bag.

I then went back out to the car and read on my phone for no more than five minutes while Marlo slept in her seat. Five minutes. That’s it. Wondering if Leta was okay inside by herself I poked my head through the garage door hoping to see her sitting on the couch but was instead greeted by this:

That first shot is from my phone because I was going to have to step over him to get the big camera and I needed to capture the fact that his tongue was so coated with flour that HE COULD NOT GET IT BACK IN HIS MOUTH. He walked around with cotton mouth for a good hour. In fact, he walked around quite a bit and tracked flour all over my house. Little flour paw prints. An adorable little art project!

Just as I took those photos Marlo woke up screaming, and when I got her inside the first thing she did was walk right through that mess. OF FLOUR. Why flour, Chuck? Why? Why go through the trouble of fishing out a SEALED bag of flour? Of chewing through that sealed bag TO GET TO FLOUR? It wasn’t bacon. It wasn’t a cheese sandwich. It wasn’t a shiny Golden Retriever in heat. IT WASN’T EVEN A TAMPON.

Why? Because my dog is a jerk.

Where was Coco during all of this? She was sitting by the garage door because she knew that Marlo and I were still out there. My theory is that she was watching this all go down and was like, DUDE. What in the hell are you doing? That isn’t even bacon. Two members of our herd are still in the garage where they could be attacked by a bear at any moment, and you’re snorting an odorless, tasteless substance. You embarrass me.

Brought to you by Cardstore.com. Visit Cardstore.com now and show off your seasonal savvy with a perfect personalized holiday card- created by you.