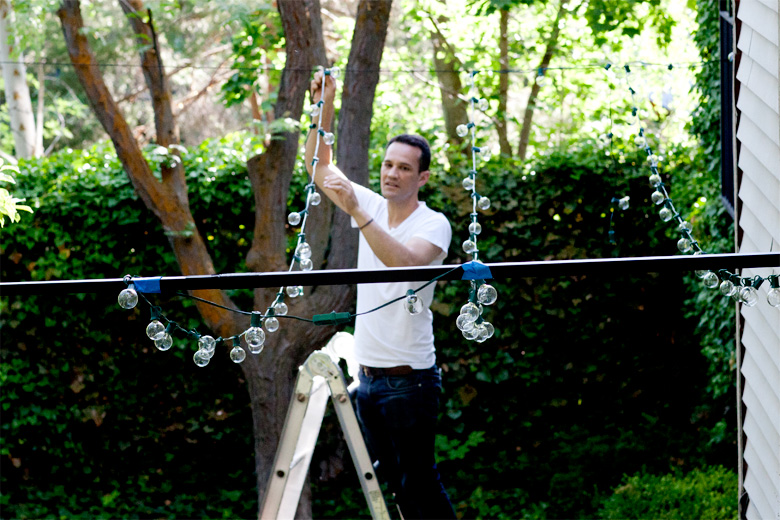 About ten days ago I got a text message from a very good friend of mine who lives in Los Angeles. Kathy was the first girlfriend I made when I moved there back in 1999, a fellow Southerner who worked with me at an Internet startup. Our shared Southern heritage helped us bond immediately, and we’ve kept in touch ever since. She said she had a situation with her family going on back home in Georgia and was taking a road trip to get there. Would I mind if she stopped in Salt Lake City for a night? WOULD AH MAAHND? WOULD AH MAAHND? Yes. Her texts have a Southern accent. And they drink sweet tea.

This is my favorite story about Kathy, and it’s not so much a story about her as it is a story that she likes to tell: we used to swap tales about the weeks in summer as kids that we’d spend at Vacation Bible School which is a little bit like going to camp. It’s like Jesus Camp. And one year they held a rally at the gymnasium at her church, A RALLY, where half of the kids sat on one side of the bleachers and half of the kids sat on the opposite side. And one side would yell, “When I say Jesus, you say Jesus. Say, ‘Jesus!'” And then other side in turn would respond, “JESUS!” This would go on and on and get louder with each round, all these Southern kids screaming, “JESUS!” until they were blue in the face. And most likely turning it into a seven-syllable word. I asked her what she thought the point was and she’d always say very matter-of-factly, “Heather, when I say Jesus, you say Jesus.”

Two days after that text she was headed my way, so I made sure that the guest room was ready. Tyrant had met her when she visited over the New Years holiday, and he suggested we gather some friends to make her visit a treat. We didn’t have much time to prepare for her arrival, but Tyrant isn’t called Tyrant just for fun. No. He’s a lot like my mom in that “not a lot of time” means “all the time in the world and enough left over that you can warm it up for dinner.”

We called up some of his friends who have in turn become my friends:

What? I ran out of exclamation points.

And then I asked Cami to see if she could take the night off of work to hang out:

Side note: Philippe got accepted into medical school at Columbia University. Yeah. Medical school. AT COLUMBIA. Except he’s working in public health right now, helping people, helping people who need the help, so he’s deferring. Because he’s helping people. Could someone please talk to him about his priorities?

I didn’t want to break the bank feeding all these people so Tyrant and I came up with a plan to work with as much as we had on hand and to keep the recipes as simple as possible. So! Just what is inside my Paleo refrigerator other than warthog?

Don’t worry, we procured bread for those who are ignoring ALL THE BLINKING WARNING SIGNS ABOUT GLUTEN HAVEN’T YOU HEARD? You haven’t? Well, I’m certainly not going to tell you. There’s a place called “google” and a whole bunch of people known as “fanatics” who can fill you right in.

To push it beyond a leisurely gathering of friends and food, Tryant wanted to string lights outside. And at first I thought, that’s fine. Because I imagined that he’d wind them down the staircase or drape them along the railing in the yard. What I did not expect was this:

Move over Avon World Sales Leader. These are a few strands of clear globe lights found here for those who saw a preview of this on Instagram and wondered.

Another side note: Marlo was away with my mother on a trip when all of this happened. When she returned and walked outside to play in the backyard, she looked up at this masterpiece, gasped and then called for Tyrant.

He and I spent a few minutes cracking up before he explained, “No, Marlo. You can’t swing from those. Those will break if you try that.”

Living with that kid is exactly like living inside a kaleidoscope.

This should explain the picture of Dane’s legs on a ladder in my yard. Dane wasn’t able to join us until much much later in the evening because of his job, but his handiwork dazzled everyone, my kid included. Sadly, no one lifted her up so that she could swing from the lights. But if in the middle of the night I hear one of these snap and a consequent THUMP we will all know who is not asleep in her bed.

Dane also usually helps with the grilling, but Natalie stepped in this time. Yeah, I don’t grill, either. What DO I do? Haven’t you ever heard of George Foreman?

You’re not going to see name plates decorated with gorgeous calligraphy on any of the dinner tables that I’m in charge of. And I’m not sure everyone had matching silverware. That’s not my area of expertise. What I CAN do is provide a place and an atmosphere where people, both friends and strangers, can gather and forget about all that other stuff for a few hours. And that night I think I pulled it off.