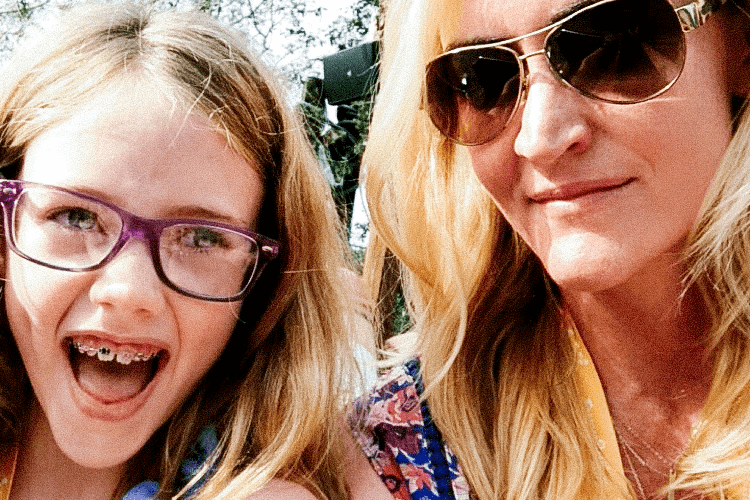 Last week the girls an I visited Disneyland to celebrate Marlo’s ninth birthday (this whole thing happened NINE YEARS AGO) and yes, while I was very busy standing in hour-long lines with swaths of Disney-frenzied humanity, I was also processing what the fuck is going on along our southern border. I didn’t make any public Father’s Day wishes to anyone yesterday because it didn’t feel right. At. All. My daughter was with me to turn nine years old and eat a mermaid-themed cake and steer a theme park car straight into the back of the theme park car her sister was driving (we broke the rules, oops) and watch fireworks turn the night sky into a dotted, glittery paradise. She was with me. She has always been with me. She will always be with me.

Four years ago her father moved to Brooklyn. Now, before I go any further, let it be known that he and I are on really good terms right now. We’ve been through our fair share of shit, but we have come to a really great place. Together. We’ve worked really hard to get here, both of us. And I could not be more grateful for that. But that doesn’t diminish what happened to Marlo when he relocated. He left the day after she started kindergarten. I haven’t talked much about his leaving here for various reasons. He can tell his side of this story, but my side of it is Marlo’s side of it first and foremost. Yes, becoming a full-time single parent turned my entire world upside-down, but that is completely secondary to what it did to Marlo. His leaving devastated her. It destroyed her. My once fearless bucking bull cloaked in a unicorn pajama costume suddenly turned inward and has since grappled with staggering insecurity and a case of separation anxiety so crippling that even four years later—four years and thousands and thousands of dollars in therapy later—she still experiences physical pain when she finds herself alone in a room.

I am not so blind as to blame all of this entirely on his leaving. She lived through our separation and divorce. She’s moved house three times. She currently lives in a single-parent home and that parent has to balance being a parent while also working a full-time job to pay the bills. She sees and absorbs the stress that I try so hard to hide from her. But the change in her personality can be traced back to the day that he left. It was so stark and so immediate. And without going into too much detail, it has been the primary focus of most of her therapy.

If there was anything I wanted to say yesterday in the rage I felt as I read the conflicting lies spewing out of this administration concerning the policy of separating children from their parents at the border, parents who are desperate enough to leave their homes with their children in their arms to come to a country that is broadcasting to the world that WE DON’T WANT YOU HERE, it was this: imagine that time you were in a store with your toddler and you looked away for 10 seconds only to turn back around and find them gone. This has happened to every single person who has had a kid. Every single person. Remember that panic? Remember your inability to breathe? Remember thinking WHERE IS MY CHILD! WHERE IS MY CHILD! OH MY GOD, WHERE IS MY CHILD! Remember your thoughts racing to the worst possible outcome only to find them 30 seconds later two aisles over, lost, in tears, wondering where the fuck YOU went.

Now think about the worst possible outcome being the outcome.

On Saturday I found and retweeted a thread from a man who was taken from his father during an intense custody battle and placed into a group home when he was four. Please read it. Read the whole thing.

when i was four, i was taken away from my father during an intense custody battle and placed in a group home for several years by an idiot judge. we went to parks and zoos, too, and then i’d cry myself to sleep most nights. the trauma left me bent for years. this is child abuse. https://t.co/3rsFfkIptX

He was not placed in a detention facility and forced to sleep with 20 other kids inside a cage—do not even come at me with “those aren’t cages”, you fucking racist asshole monster—and the trauma he experienced during those years broke him. It immediately made me think of what Marlo has been through in the last four years trying to make sense of the structure of her life, even though she has seen nothing as extreme as what that man did. We do our best as parents to minimize the longterm damage that will inevitably be done to our children as we raise them as imperfect humans. We can’t avoid or prevent all of it, and even those of us who had idyllic childhoods still have our lingering demons. But I cannot comprehend being a parent who would not only turn a blind eye to what is happening to these families and these kids—these innocent kids—but also justify this blatant abuse thus ensuring a lifetime of terror and panic and developmental disfigurement. These kids won’t have access to thousands and thousands of dollars of therapy even if they are lucky enough to see their parents ever again.

I bring up Marlo’s experience here only to emphasize the fact that her relatively minor disruption has been incredibly disruptive. What these kids are living through? THIS IS UNCONSCIONABLE. And it doesn’t have to fucking happen.

And before I end this rant, I really want to fucking know this: WHERE ARE YOU, MORMON CHURCH?? Where is the outcry, First Presidency? For all intents and purposes, these are the descendants of the chosen people in The Book of Mormon. The primary scripture of your entire religion says that these families descended from God’s chosen people, and yet you remain silent as babies are ripped from the arms of their mothers? I suppose they are only convenient to you when you send missionaries out to convert them to bolster your membership records, all while using the line, “What if I were to tell you that there is a sacred scripture inspired by God that says you are a member of a chosen people?” What a fucking monstrous joke.

Sorry, this bullshit has wrung humor right out of me. I don’t know how to approach this with anything but raw anger and hate

Kids in cages. Never ever talk to me about American Exceptionalism again. This country is a moral and legal sewer https://t.co/4VWafjAzh2