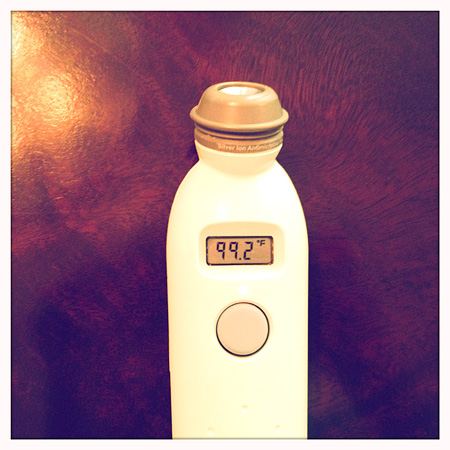 An undaunted fever hit Leta last Wednesday night (reaching a high of 104.5 on Thursday and Friday) and kept her in bed until midday yesterday when it finally relented and her appetite returned. I was feeding her anything during that time—pop tarts, ice cream, cookies, pretty much anything that would appear in the first line of an email chiding me about perpetuating childhood obesity and the end of the world—just to get calories into her body. Please address that email to her pediatrician who said to ride out the fever and feed her whatever she would eat even if that meant processed junk. He’s six foot seven inches tall and has a degree in medicine, so be sure to run spell check.

This means we didn’t leave the house once the fever had struck. Our holiday weekend was spent splayed across various beds and couches playing video games and watching movies. For two days in the middle of all of it none of us changed out of our pajamas. The fever wasn’t contagious, but Marlo felt left out of all the fun and pretended to be sick, moaning and pretending to walk with a limp. I was like, Marlo, you’re super cute, and while fever is certainly a symptom, this isn’t polio. Pick up your toys.

We never want our children to be sick, but illness tends to soften some of Leta’s harder edges. She wanted to snuggle. She wanted to curl up under my arm. She wanted me to scratch her legs and back. Whenever I carried her to bed she squeezed my neck during the embrace. The sometimes baffling distance that occasionally exists between me and my older child disappeared under the heat of that fever, and I got to lavish her forehead with kisses without her gagging in my face.

The fever unmasked the child inside of her that is often shaded by pre-adolescent anxieties and a somewhat sophisticated repugnance toward parents. She doesn’t necessarily think she is smarter than I am (although she most definitely is), she just thinks that a lot of the minutia I have to do as a parent is really stupid. Like, why do I have to remind her to close her mouth when she chews food? Why does she have to make her bed? Why does it matter if her clothes are wrinkled? None of that is going to help her solve real world math problems, so what is the point?

THE POINT? The point is I am from the South and I have a heritage to uphold, YOUNG LADY.

Last night the fever finally broke completely, and this morning she returned to school. I think she was nervous that she had missed two days, so despite feeling well she ended up in bed with me again last night. I don’t mind this anymore because unlike her younger sister she doesn’t climb in beside me, scream incessant gibberish, and stick her fingers up my nose. Yes, she moves around a lot, but sometimes she moves so that her head is touching mine. And this morning as I was walking her into the building and she refused to hold my hand out of embarrassment, I thought about the warmth of her forehead on my pillow and the several days I got to spend curled up with the child hidden inside her.