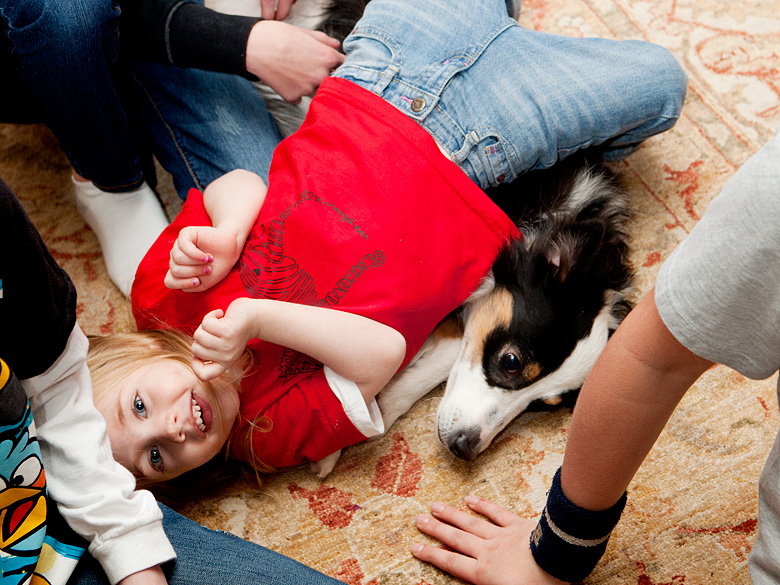 Was it last week? Ten days ago? Can you believe the world ends on Friday? I’m looking forward to that nap.

The evening of Armstrong Family Game Night, that’s where I was going. Like most days during winter, Utah saw some unpleasant form of weather. It’s either freezing rain, snow, gusty winds, or some weird event we all get to blame unfairly on the polygamists. They ruin everything. Have you tried wearing your hair in a braid in public lately? Good luck with that.

That night it was snowing, and listen. Yes I’m a bit of a neat freak, but I’m not clinically neat. I like clean surfaces and I fold shirts a certain way, but I will leave my coat hanging on the back of a kitchen stool and I do live with animals who poop in the yard. That night I was going to relax, but when I started snowing that little itch in my brain started kicking its leg and I broke out some towels. For the seventy size-13 pairs of shoes that would be tracking in footprints.

Can I just say, rock on with your neon yellow high tops. Bust a move.

I’d like to announce that my recipe (the shredded chicken and sweet potatoes) was the most talked about dish of the evening, and we pretty much scraped that slow cooker clean. Everyone kept asking, “What kind of potato is this?” and when I told them it was a sweet potato I got into the same argument I’ve had over a dozen times in the last couple of years since I started eating Paleo. The sweet potato is very different from a regular potato. VERY. They are not even in the same botanical family, you guys. Different botanical families. Like the Capulets and Montagues.

(You can read this primer about it, but just know this: sweet potatoes do not contain more sugar than regular potatoes and are in several ways a lot healthier for you, just read it and THEN get back to me with your skepticism. In the meantime I will be over here benefiting from vitamin C, vitamin A, a host of antioxidants, and moral superiority.)

I got a lot of compliments on my cooking and the design of the invitations, and that’s when I mentioned that Coco provided security during the design process in case a wolf happened to jump through the window or Marlo glued her hand to the table (I’d have preferred the wolf).

We didn’t end up using game tickets like I had hoped, but I’m actually totally fine with that because the time that we used to tell jokes while Dane fixed the console will go down as some of the best time I’ve spent with my family this year. Talon got to tell his King Kong’s balls joke, and then after that I asked my brother if he remembered the joke Dad used to tell throughout our childhood. Ranger kindly pointed to our father and said, “The man is sitting right there. Yes he is old and decrepit, but I hear he can still form words.”

We are so nice to each other. For Christmas my brother is getting me a wedgie.

I’ve said this in many interviews before, but I’m not sure if I have ever said it here: my family had a really hard time when they found my website. They had every reason to be upset, but mostly I think it proved to them that the “phase” I was going through wasn’t so much a phase as it was actually “Heather”. Over time they forgave me for some of the horrible things I said (and have since deleted), and somewhere along the way my parents recognized themselves in what I do here. My mom sees herself in my ambition, and my father has to know that the majority of those capital letters I use? HIM. ALL HIM.

So I looked over to my father, asked if he would like to tell the joke, and that’s when the performance started. He didn’t remain where he was sitting, no. He got up in front of the whole group, commanded the room and began his monologue. And it was pure, vintage Michael A. Hamilton, from the sweeping hand gestures to the foam around his mouth, from the thundering rise of his voice to the dimming shape of his whisper. Totally magical.

I won’t repeat the joke here because it’s only mostly family friendly, but the gist is: a woman goes to a pet store, buys a wooly booger and takes it home where her drunk husband commands it to attack his butt. The kids loved it.

But this is the best part… Marlo had no clue what that joke was about, but she watched my dad tell the whole thing over a five-minute period. She observed the way his hands emphasized his voice, and when he was done she thought to herself, “The hell? I can do that. AND? I can do it better! Step aside, HAMILTON.”

So she hopped up, told everyone to remain seated, and then she began a string of nonsense so exaggerated, so dramatic, that not even the most ridiculous post on this website could compete. And it was EPIC, her hands flapping up and down, her little voice screaming and then diving into a tiny mumble. Several times she had to tell people to stop laughing because SHE WAS NOT DONE YET. There was a part about walking up stairs and sleeping in a bed and riding in a car and watching a show, and once her mother brushed her hair. Once! I remember that morning years ago.

At the climax of the story, the part of the plot where all the nonsense hinged… she stomped her foot, raised her hands into the air and proclaimed, “AND THEN… AND THEN… AND THEN I HAD A BOWL OF GOLDFISH CRACKERS!”

Old man, the mantle has been passed. You should be proud. Marlo, she is a capital letter.

I haven’t said much about the WiiU in these posts, but if recent activity is any indication, this is Leta’s favorite console by far. She asks to play it almost every day, and this is a kid who writes chapter books in her free time. All of the other gaming systems we own are at her father’s place, and when she asked if she could take this one over there, too, I was like, honey, I know I’m terrible at troubleshooting these games for you. I know you’d have more luck dropping it in a toilet than asking your mother to fix it.

But guess what I DO know how to do? Search the Internet! And the Internet? It knows everything. Even when it doesn’t. And if that doesn’t work? We’ll ask Marlo.

An FYI: Hurry, your chance to win a Wii U™ Deluxe Set and $5,000 to take your family on vacation ends December 22nd. See details here.