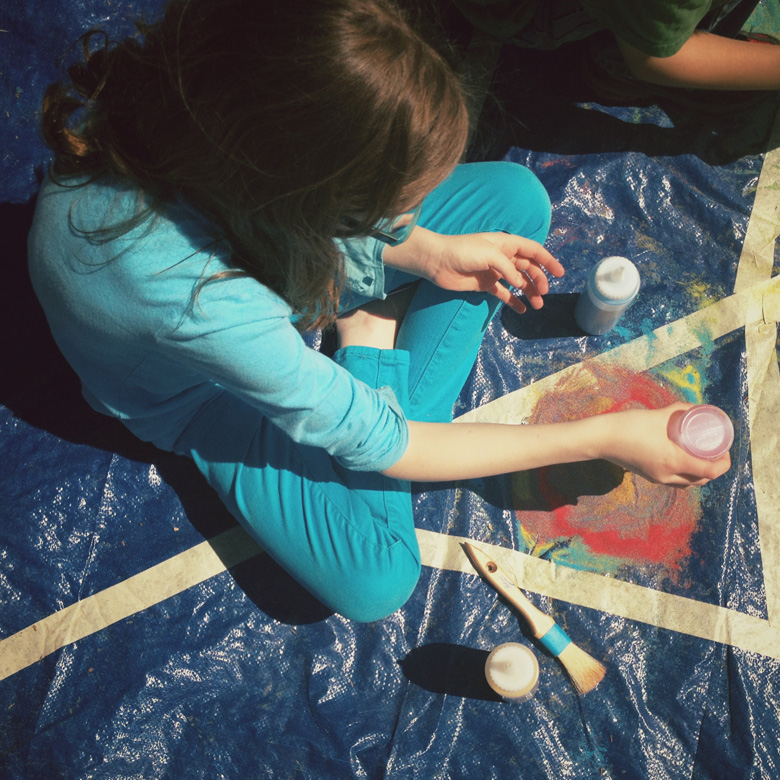 Friday afternoon while sitting at gate B18 waiting for our flight to Los Angeles, Leta looked up from a game on her phone and asked, “Are we going to have a lot of fun, Mom? Like, not just a little bit but A LOT?” We had just walked past 17 other gates and she wanted to stop at each restaurant and gift shop along the way to “take a look around.” I put that in quotes because it’s a euphemism for “pester you to buy me crap.”

When the idea of this trip was in its early stages, my ad partners asked if I wanted to fly out with both kids to participate in the Epic Play Date. Here’s where I go on record again and admit that I do not enjoy traveling with young children. I have friends who have traveled with two kids under the age of three from here to Europe and back and if this were an option in a choose your own adventure book, I’d choose the other option of being awake while a wolf slowly gnawed off the lower half of my body. I’d actually hand the wolf my intestines.

I also very rarely get to spend alone time with Leta. She’s always been a delightful kid, but she’s now at an age where the majority of the time I spend interacting with her is more about our relationship than it is about getting her dressed or making sure she doesn’t choke on small objects that have no business being near her mouth. And I’m eager to nourish this with her. We talk. We discuss. We laugh and tell jokes. We comfort each other. And, most importantly, she can entertain herself on a plane.

So I got to make it a special trip for the two of us. And to assure her that we were going to have A LOT of fun, I bought her a bottle of Dr. Pepper right then and there at the airport. You’re like, WHOA. CALM DOWN, ARMSTRONG. WAY TO BLOW HER MIND.

Here’s the thing: I don’t think she’s ever had a sip of a Dr. Pepper. At least she hasn’t in front of me. I may be really relaxed when it comes to the rest of her diet, but I’ve actively avoided introducing her to soda. She told me she’s never had a Dr. Pepper before, and for all I know it’s all she drinks at my mother’s house and my Mormon mother told her to lie to me if I asked her about it. I AM ON TO YOU, MOM. And I’m telling your bishop.

If she was lying to me she deserves an Oscar for her reaction when she took that first swig. There was puckering and gagging and then her eyes bulged out of her head and smoke billowed out of her ears. And then there was the belch.

“Burping is part of reality.” – my 9-yr-old who saw my reaction after she deafened an entire terminal at the airport.

She did. She said that to me. I told you, we discuss things.

Leta’s reaction to the plane ride was nothing in comparison to getting into the cab at LAX to drive to the hotel. The plan was to stay in Marina Del Rey for the night and head up to Santa Barbara the next morning, and when we got in the cab she suddenly realized, wait. We’re in LA. WE ARE IN LA. Do you know who lives in LA? Selena Gomez! Victoria Justice! Miley Cyrus! Miranda Cosgrove! I can list off those names in that order because she told the cab driver and then she told the woman at the front desk of the hotel. As we rode the elevator up to our room she asked me if I know who lives in LA, and I said, yeah. My butt. It’s got its own apartment in West Hollywood.

I let her use the key card to get us into the room, and you guys. It’s official: I’m getting Leta a hotel room for Christmas. That will be the gift guide I put together for nine-year-olds: a hotel room with two beds. One for you! One for her! Oh, look! FREE SOAP. Is that free shampoo? IT IS! And whatever you do, DO NOT FORGET THE ICE MACHINE.

Seriously. This whole event could have been a very long hallway with an ice machine at the end and it would have gone down as the best time she has ever had.

The following morning we joined five or six other families who had flown in and took a bus two hours up the coast to Santa Barbara. I got to meet some of the women who had won the trip (Hi, Tiffany! Hi, Heather!) and here is where I personally thank Heather for giving birth to a daughter eight years ago. It took a few hours for her daughter Libby and Leta to warm up to each other, but when they finally did they were inseparable. And it happened at that critical point in the day when Leta had already participated in every activity and was teetering on the Cliff of Boredom. You’re familiar with that geographical formation, right? Down below is a pool full of sharks, and if there is nothing to do, NOTHING AT ALL TO DO EVER, those sharks will actually jump out of the pool and swallow your kid whole. The blood, oh my god.

We participated in a poetry class.

We painted with colored sand.

We made balloon animals.

She accompanied me on a photography walk that I had to conduct.

In a brief moment of downtime I could see one of the sharks in the pool below the Cliff of Boredom about to leap out of the water when suddenly I turned around and Libby and Leta were hand in hand walking over to request a song from a DJ playing music in the lunch pavilion. They remained this way for the rest of the day, into the evening when we ended up at the beach around the campfire with musician Brett Dennen who let Leta strum the guitar for a song or two.

I’m also going to give Libby credit for getting Leta out onto the beach in her bare feet, her toes in the California sand. Peer pressure for the win! How far my lovely little Leta has come since 2008.

Later we got to drop off our things at the amazing campsite high up on a bluff overlooking the Pacific, and since the two of them were having so much fun I let Leta stay up several hours past her bedtime to play in Libby’s tent.

I talked with Tiffany and Heather while the kids played — all three of us live so far apart and have such different jobs, and yet, the experience we have had with motherhood has been so incredibly similar. It was such a comforting two hours, and I want to thank them for being so generous to me. Yes, we were strangers, but they made me feel so wonderfully normal.

When it was finally time to retire for the night, Leta and I made our way in the dark to our tent. And this has to be my favorite part of the entire trip. This is going to seem totally lame because I know a lot of you have been sleeping with your kids for years and it’s no big deal. Parents have been sleeping with their children for millions of years and they all deserve a cookie. However, I do not sleep with my children because both of them rotate like the propellor on a plane when they are in bed. I’m surprised Leta doesn’t fly in her sleep.

Our tent was the closest one to the bluff, the closest to that breeze whipping up and off the ocean. It was all capital letters FREEZING, and after she changed into her pajamas and climbed into bed Leta was so cold that she couldn’t even form the words to tell me. So I climbed in beside her, pulled the down blanket up around our chins, and we slept all night snuggled in and around each other, all knobby knees and elbows and legs and HAIR. I loved it! I loved waking up in the middle of the night and feeling her shoulders move up and down as she breathed. I loved how she would move closer to me for more warmth. She couldn’t pull her usual propellor moves because we were snuggled so tightly. Maybe that’s the secret. Prehistoric kids didn’t move around in their sleep because everyone was so cold. I’m a genius. And probably making all the anthropologists in the audience embarrassed that we are members of the same species.

If you totally disregard the three hours we had to wait for our plane on Sunday afternoon, a very boring three-hour stretch at LAX that I am sure will dim over time in her memory, Leta will tell you that she had the best time ever. Ever? Ever. EVER?! LIKE, EVER! At least until we have ice cream after dinner tonight. Then a new standard will be set for the best time ever and only tomorrow night’s dessert will beat it. But only if a really good episode of “iCarly” doesn’t come on first.