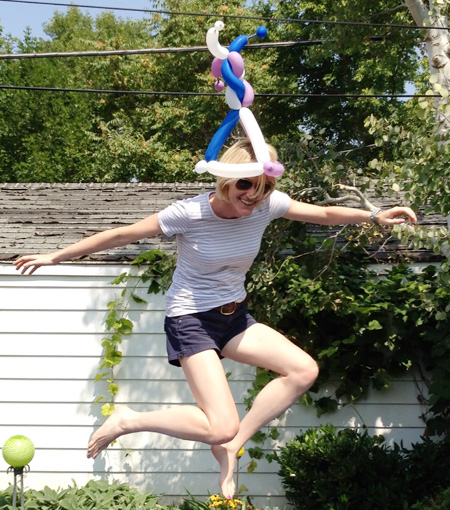 Monday morning Marlo slept in late enough that I was able to get the dogs outside and pour myself a glass of orange juice before the madness set it. Just as I was taking my first sip I heard Leta leap out of bed with a thud, run down the hall and almost tumble down the stairs. Suddenly she was standing in the middle of the living room, her face frozen in panic, and in the middle of announcing that the felt like she was going to throw up a river of vomit shot three feet out of her mouth. Good morning, Vietnam!

“Oh, Sweetie,” I said as I ran to grab her by the waist. “Let’s get you into the bathroom.”

She nodded, covered her mouth with her hand, and just as I positioned her in front of the toilet another wave hit. I motioned toward the open bowl, but instead of leaning down to throw up like I thought would be her instinct, she remained standing upright and just opened her mouth. I did not know that vomit could travel in such a horizontal line! So impressively straight! Next time I need to level a photo I’ve hung on the wall, I’ll just have her stand beside it and barf.

When she gets sick like this again we’re going around the entire house and straightening everything on the walls.

The very loud part of my brain felt awful for her, and despite the smell and sight of it all I held back her hair and rubbed her neck as she continued to puke everywhere. The mama bear in me wanted to beat my chest and yell at whatever it was that was causing her this pain. If that virus had been in a petri dish right then I would have pulled down my pants and mooned it.

Or at least thrown a carrot at it.

A very small part of my brain was like WTF?! The toilet bowl is RIGHT THERE. Right. There. See the top? It’s open! Aim for the bowl! THE BOWL! A PERFECT CONTAINER FOR YOUR PUKE. Do you see any other container in this room that is perfect for puke? THERE ISN’T ONE! Because the toilet bowl already serves that purpose!

Who stands next to a toilet bowl and chooses to vomit on the walls? I cannot believe I just wrote that question. Who asks that kind of question? How did I suddenly become your crotchety great aunt from Brooklyn?

This is a conversation the mom brain has with itself as the mom spends 45 minutes cleaning last night’s partially digested burrito out of 400 crooks and crevices. It’s not a conversation she has out loud in front of her sickly child, no. Moms have more compassion than that. Moms make sure the kid is resting nicely on the couch next to a bucket because suddenly this particular mom remembered that one time when I was her her age and instead of running into the bathroom and puking inside the toilet bowl, I ran to the front door, opened it, and hurled all over the porch. And yet, somehow I still graduated valedictorian in high school.

So, somewhere along the way, someone had to teach me the correct way to vomit.

Who stands next to a toilet bowl and chooses to vomit on the walls? Well, as it turns out, VALEDICTORIANS.