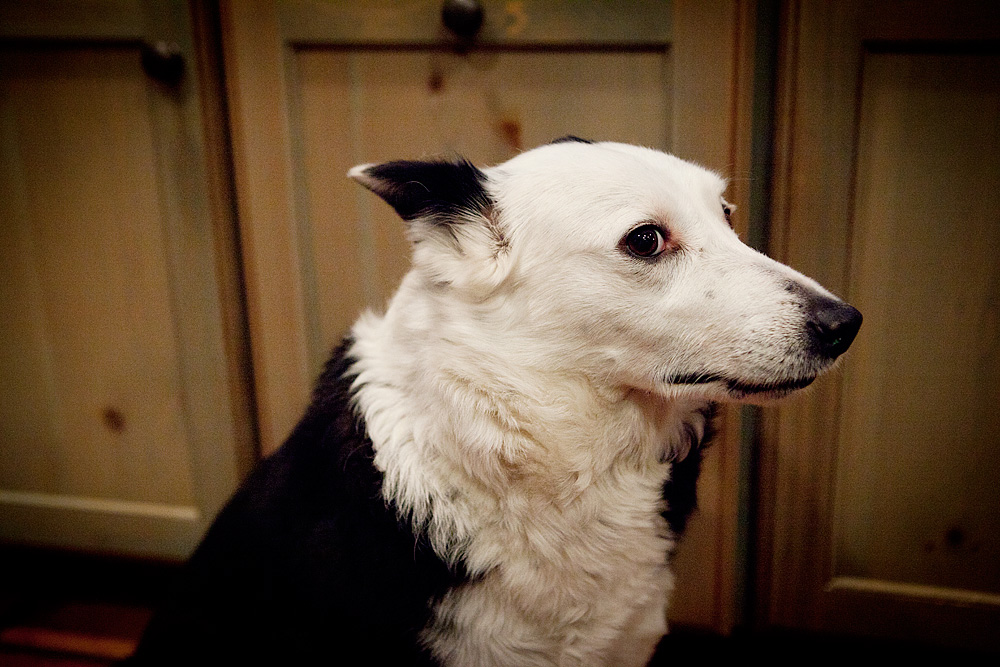 Last weekend Dane’s mother headed out of town and needed someone to watch the mixed Border Collie named Kadie who has been a part of their family for the last eight years. All he had to do was say DOG and within the hour I had gone into the backyard and built a guest house for our BRAND NEW VISITOR WHO’S A GOOD DOG WHO?

I think I may have tweeted about this once, but when I see a dog tied up outside of a store or a restaurant I get so excited that I will lie down on the dirty concrete and roll around in discarded gum to give it cuddles and kisses and love. And then when I get home and walk through the door and see Coco I’m all, oh dear god. Suck it.

Kadie was unfortunately abused before Dane’s family adopted her and as a result possesses some understandable personality traits. She’s not very trusting of strangers, she’s fiercely protective of her owners, and she’s highly intolerant of other dogs. It’s that last trait that worried Dane most because he didn’t know how the interaction would be among her and Chuck and Coco. I was like, I know you think it’s going to be bad, but you have NO IDEA. We should make popcorn and pull up some chairs!

Dogs have an unspoken pecking order that pretty much sorts itself out within a few minutes, maybe a bit longer when you’re dealing with a dog like Coco who was born without a brain. We had them all meet in the backyard where they could sniff each other’s butts and assess each other’s résumé, and much like I had anticipated Chuck made his introduction and then backed away very carefully as if bowing in front of an angry queen. I thought he might toss her his lunch money and give himself a wedgie preemptively.

And then there was Coco. Our sweet and soft and lovable Coco who would not take a hint. She tried to stand her ground but Kadie would smack her down with authority again and again. Like, listen. These people here? They may deal with your crazy, but I am not these people. Chill out, back away, and as long as I am here do not even think about making eye contact with me, oh, there you did it, you looked me in the eye and now I have to sit on top of you.

Turning Coco into a couch pretty much did it, and then for the next three days we would laugh and laugh and laugh as Chuck and Coco measured each and every single one of their actions against WHAT WILL KADIE THINK? I’d open the back door to let them out after a meal and both of them would sit there cowering, eyes darting, waiting for Kadie to walk out first. If all three of them were in the same room together, Chuck and Coco would huddle up in a corner, their backs facing out. Once Coco walked into the kitchen, saw Kadie sitting next to me at the table, and I kid you not, she walked along the wall, almost hugging it, until she got about ten feet away. And then she sat down, rolled onto her back and played dead.

As menacing to the dogs as she was, she was as equally loving with the girls. Leta patted her head a few times, but Marlo followed her around for hours, used her as a pillow, and fed her carrots from a bowl. Monday morning when we were eating breakfast, Kadie was still asleep downstairs in Dane’s room. Marlo looked down, saw Coco sitting underneath her chair and asked, “Isth that Kadie?”

Are you feeling sorry for Coco? Don’t. Don’t do that. Because when Kadie left on Monday night and Coco finally realized she was gone, she was so relieved that she hopped up onto the couch, started turning cartwheels and whistling, “Ding dong the witch is dead!” Like, the entire song.

Kadie now has an open invitation to come visit for as often as long as she likes. And she gets to sleep on a bed right outside Coco’s crate.