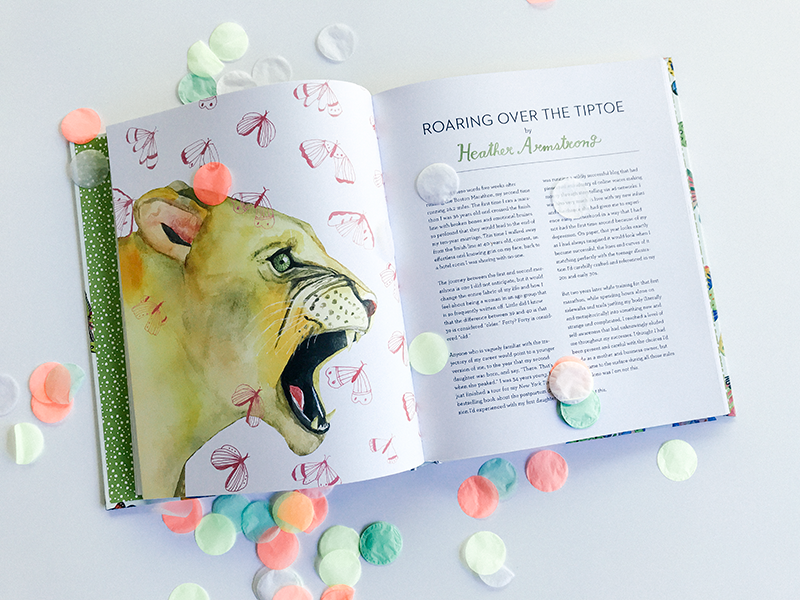 A couple of years ago my friend Lisa Congdon (you may be familiar with her massive body of work) asked if I would submit an essay to a book she wanted to publish about women who find getting older a gratifying experience, not something to be dreaded. It’s called A Glorious Freedom: Older Women Leading Extraordinary Lives. I should note here that when I was a 19-year-old sophomore at BYU, I thought that a gorgeous single 24-year-old woman who lived in my apartment building was hiding some horrifying, scandalous secret. Maybe she had a forked tongue or hoarded dead birds or performed shark abortions. Something terrible had to be going on because she was so old and not married. Might as well buy a farm of cats and resign herself to a slow and painful death in her own feces.

That whole notion was guided by my religious upbringing, yes, but women are conditioned to fear aging. We all know this. This isn’t some secret or new revelation, and I’ll never forget the first time someone let me browse their online dating profile to test out an app, to see if it was something I wanted to try for myself. Almost every single guy over the age of 50 had set his preference to women between the ages of 20-35 years old. Wouldn’t want to go anywhere near that 36-year-old muff, am I right, Grandpa? Probably smells like a combination of wisdom and critical thinking, and no one wants to put his face up in that stink.

This is a post about books. Hi, Mom! Leta, you can stop reading now.

A few of my women friends dreaded turning 40, but I know far more men who experienced some sort of existential crisis over that number. I personally couldn’t wait to cross over that line. Getting older has felt like shedding one enormous burden after another even though I literally and legitimately gain one enormous burden after another the older that I get. Next year I turn Fuck If I Care About That Anymore years old. The year after that I turn If You Are Sitting In The Aisle Seat And Take The Middle Armrest I Will Cut Off Your Dick years old. The closer to death you get, the more you realize that it is your right to burn everything to the ground.

What’s interesting about the essay that made it into her book is that I wrote it just weeks before plummeting into the worst year of my life. But that has nothing to do with my age or feeling insecure about being 41-years-old. That has everything to do with eating a fuck ton of quinoa and lentils, bloating to the size of a pregnant elephant, and still being so hungry that I wanted to eat a couch. I would have settled for an ottoman with a side of a Moroccan pouf. My kingdom for a throw pillow.

I’m better now. A small drink coaster or table lamp tides me over between lunch and dinner.

Coincidentally, Lisa designed the cover art for my podcast, and a few weeks ago my cohost and I spoke to the author of another book featured below. James Breakwell’s twitter account (@XplodingUnicorn) went viral after it was featured on Buzzfeed and now he’s got a book coming out called Only Dead on the Inside: A Parent’s Guide to Surviving the Zombie Apocalypse. Turns out James was an early reader of my website, and during our conversation he said I’d been an inspiration to him. And that he’d begun writing web comics when he realized just how much work goes into writing an actual blog post. I laughed about it then and have continued to laugh about that since. I hope he knows one, how humbled I am, and two, just how refreshing that statement was given the innumerable times people have said, “That’s all you do? Anyone could do that.”

Just an hour ago I was trying to explain to Leta’s potential orthodontist what I do for a living and he looked at me like I was standing there chewing on the severed head of a moose. I had done what I always do. I’d begun with, “I’m a writer,” and hoped he’d leave it at that. But no. He wanted to know what kind of writing and where and when and how, and suddenly his face began contorting and I had moose nostril dripping down my chin.

I dug a bloody eyeball out from one of my molars with my forefinger, waved my other hand in the air as if it was no big deal, and concluded, “Basically, anyone could do what I do.”

In Good Faith: Secular Parenting in a Religious World
A Glorious Freedom: Older Women Leading Extraordinary Lives
Only Dead on the Inside: A Parent’s Guide to Surviving the Zombie Apocalypse

The Lost Letter: A Victorian Romance
The Perfect Score
A Debt Against the Living: An Introduction to Originalism

Snow & Rose
Happiness: A Memoir: The Crooked Little Road to Semi-Ever After
Little Soldiers: An American Boy, a Chinese School, and the Global Race to Achieve

Baking Class: 50 Fun Recipes Kids Will Love to Bake!
Little i
Polly and Her Duck Costume: The true story of a little blind rescue goat

Nutcracked
The Zen of Slime: A DIY Inspiration Notebook
There’s Nothing to Do!

The Nasty Woman Journal: A Journal for Women Who Refuse to Sit Down (or Shut Up!)
The Toddler Survival Guide: Complete Protection from the Whiny Unfed
Boys: An Illustrated Field Guide