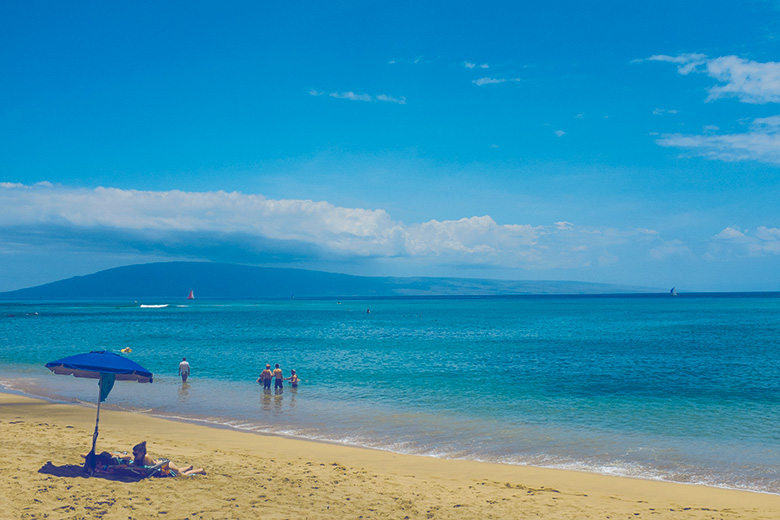 On the evening before I had to leave Maui to return to Utah, all five of us who had gathered there — Stacia, Tanya, Piper, Eyre, and me — headed out in the dark to perform a certain cleansing ritual on the beach. That is not my story to tell, but as we were leaving the grounds of the resort we stumbled upon a frog that was quite possibly the size of a football. It is my understanding that frogs are not indigenous to Hawaii, particularly ones that are bigger than some newborn babies, so I sized it up and decided that I should balance it on my head, cover it with my hat and sneak it through security on my way home. If a TSA agent discovered it, I’d be like, listen. It is not against the law to want to help preserve the ecosystem.

Do not arrest me, sir. Elect me your mayor.

When I leaned down to inspect it the girls told me to leave it be, we had a mission that night and it did not involve kidnapping a frog. FINE. I’d look for it on our way back, and as we continued walking toward the beach a stray cat darted across the lawn. I stopped one more time and told everyone that we needed to look around to see if we were being followed by any mythical bobcats, raccoons, rattlesnakes, squirrels, or white birds who wanted to die at my feet.

We spent about an hour on the beach, each of us sipping various cocktails as we reminisced about some good and some not so good memories. In the end we achieved a little bit of closure which was our mission for the evening, and then headed back to the condo. At the exact spot where we had seen the frog on our way out we found him again, except he was lying on his back, each of his limbs splayed out as if waiting for dissection in a high school biology class. He was not breathing or moving or showing any signs of life.

“You think the cat got him?” Tanya asked.

“Had to have been the cat,” Stacia responded. We all surrounded his body in a circle and leaned over him looking for wounds.

I reached my hand out to tap his silent belly when Eyre swatted my hand.

“What if it was some crazy frog disease and not the cat? You can’t touch him. It could kill you, too.”

“Some crazy frog disease?” I asked.

“My bet is on the cat,” I said. And then I got really upset that here I was again encountering wildlife in some awful way. Why can’t cats stay out of my attic? Why can’t squirrels stay out of my window well? Why do birds choose my doorstep as their death bed? Had my energy drawn doom to this poor, albeit enormous frog?

I was standing there experiencing this sorrow when I decided to drip my cocktail onto his head. What? Do not look at me like that. You know exactly whose website you are reading. In my mind I thought it would be some sort of spiritual gesture, a baptism of sorts, a “sorry you had to cross paths with me and die.” Several drops pooled on his neck, and I held my forehead as if I’d lost some childhood pet. I was about to close my eyes in reverence when suddenly that amphibian shivered, SHOOK HIS HEAD, and then jumped three feet straight into the air.

That motherfucker missed my face by two inches.

He landed on his feet and faced me specifically. Ahem. First, he shivered. Like a teenager tasting liquor for the first time. Second, he shook his damn head. Like, who do these bitches think they are coming along and interrupting his nap. Three, HE STARTED TO CHASE ME. Okay, here’s another first of all: I’ve come a really long way with spiders and snakes because, well, I live in Utah and I have kids and someone has to hold their shit together when encountering those things. But frogs? You don’t find a lot of frogs where I live and here was one the size of a horse charging me and I could not control the violent screaming that was erupting from my face.

Screeching. Yelping. People leaned out of their windows to ask who was in the courtyard gutting pigs.

You would have screamed, too. Do not lie to me and say otherwise.

I managed to escape the dragon, but I don’t think I stopped screaming until I got off of the elevator, into the condo and hid underneath my bed.

Eyre and I had to leave the following day before everyone else, and when I got settled in at the airport I thought about all the inside jokes we’d be taking home with us from the days we’d spent on the beach together. I group texted them a goodbye and then said, “DO NOT FORGET: I RESURRECTED A FROG WITH BOURBON.”