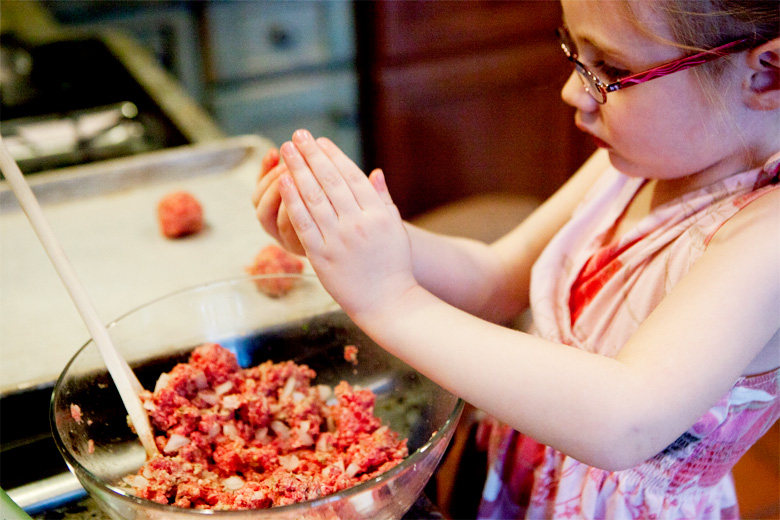 Saturday morning we woke to a slow drizzle, cloudy skies and temperatures I’d like to stick in a bag and drop kick to the arctic where they belong. I know how to do that, the drop kicking part because I played goalie on a soccer team when I was ten years old. Yep. ME. All 40 pounds of 10-year-old Heather B. Hamilton. I was actually pretty effective because I looked just like the pole on the side of the goal and when I ran around the other team thought they were hallucinating.

A few attempts to schedule a play date for Leta failed, and for a moment I thought her sorrow would create a black hole big enough to interrupt the orbit of communication satellites. It’s just the worst, you guys. And I’m only poking a little bit of fun because I was exactly like that at her age. I have to remind myself that I used to get just as upset at the prospect of being bored because my urge when she starts to pout is to go get her box of Lucky Charms, pour a jar of pickle juice into it and say, “This is exactly what life is like when you’re an adult.”

I listed off some things we could do, but she dismissed each one. We’ve already been there and that place is boring, and so forth, and why couldn’t we just walk over and see if our neighbor was home? I had to explain to her that it’s rude to show up unannounced at someone’s house and knock on their door. You guys! Those words came out of my mouth! AND THEY ARE TRUE! Think about it. When someone rings your doorbell, what is the first thing that goes through your head? Does it involve a firearm? See! That’s what I thought.

So I asked her if she wanted to help me christen the kitchen. We were going to have to hit the grocery store anyway, why not spend the afternoon using all the appliances I haven’t yet touched? What? Yes, I’ve been living in this house for over a month. No, I haven’t used the oven once. Yes, that’s megaton of cold cereal for dinner.

“Is there something you would eat that you and I could cook together?” I asked.

“Like, a frozen pizza?” she answered. Seriously. I looked around as if all of you were standing in my kitchen and I took a bow. What a quintessential dooce® moment.

“No, I was thinking something with ingredients that we have to measure.”

I was totally joking around when I poked her in the stomach and yelled, “MEATBALLS!” Because how gross is that? If my kid won’t eat a chocolate cupcake, you think she’s going to eat balls of meat?

“You… wait…” I looked furiously around the room to see who was watching. “Where on earth have you even seen a meatball sub?”

“School! I love it when they have meatball subs on the menu!”

ATTENTION SCHOOL: IF YOU ARE CONDUCTING BLACK MAGIC, I AM TOTALLY OKAY WITH THAT.

Preheat oven to 400 degrees. Line a baking sheet with parchment paper. Mix all of the ingredients together in a large bowl. Form mixture into two inch meatballs. Bake for about 20 minutes.

Holy crap, almond flour is expensive! Those paleolithic humans must have been rolling in cash!

When we got back from the grocery store and lined up all the ingredients, Leta was so excited to get started. That excitement lasted all of four seconds, up until Marlo grabbed her stool, hopped up next to the counter and squealed, “ARE WE HELPING?!” Suddenly cooking meatballs was totally not cool.

And oh my, the helping. She measured and poured salt.

She poured minced onion that I had leftover from a guacamole recipe.

She wallowed when I wouldn’t let her mince the garlic cloves (have you ever tried to get the garlic smell out of a three-year-old? Like, she breaks the washing machine every time it gets to the spin cycle.)

She measured oregano and reluctantly let Leta pour it.

And then she reluctantly let Leta whisk the egg.

She measured and poured flour.

And then she stirred.

And stirred even more.

Initially I wasn’t going to let her help me roll the meatballs, but when she saw me start the first one it was like I had just thrown a stick for a golden retriever. MUST. ROLL. RAW. MEAT.

And then… the best part… the part she had been waiting for… CLEANING UP. I told her, “Marlo, my ad network approached me and asked if I’d partner with Clorox at some point this month for a post on my website. And you know what I said? I said, ‘My kid’s favorite thing in the world is cleaning things up, so if Clorox wants to put a tattoo of its logo across her forehead, I’ll hold her hair back while they do it.'”

When I pulled out that tub of wipes I thought her glasses were going to crack from the vibrations of happiness shooting out of her body. I’d been saving them so that she could help me clean the bathrooms (her favorite room to clean, of course), but here was this mess and the opportunity to surprise her with an unexpected present. Clorox, I’m getting her disinfecting wipes for Christmas.

I made the mistake of briefly turning my back to check on the meatballs in the oven because when I turned back around she had used every wipe in that container. Every single one. When I asked her why she needed to use all of them she looked up at me with the most innocent eyes and answered, “Becausth the counter wasth stho dirty I needed to clean it.”

I used some of the less dirty ones to wipe the raw meat off of her hands, and then called her back when it was time to mix the meatballs with the pasta sauce.

Clorox has culled a list of what’s called ick-tionary terms, words formed when you combine regular terms with the messes that accompany parenthood. For instance, the stains running down the side of the toilet are referred to as “trickle treats” and you might not think I’d have that problem since I’ve got girls, but did you know that waiting to get off the toilet until after you’ve finished peeing is not a basic human instinct?

Going forward we’re going to describe this meal as Meatball Scrubs because of the mess and also because of the epic over-cleaning Marlo did when it was over.

And behold. Leta ate food that was not artificially colored.

Do you guys have any special words or phrases you use to describe messes or things that go wrong in your house?

This post is brought to you by The Clorox Company. I have partnered with them to spread the word about Clorox’s Ick-tionary program. To share Ick-tionary terms and real life messes, visit www.icktionary.com. All opinions and stories are my own.