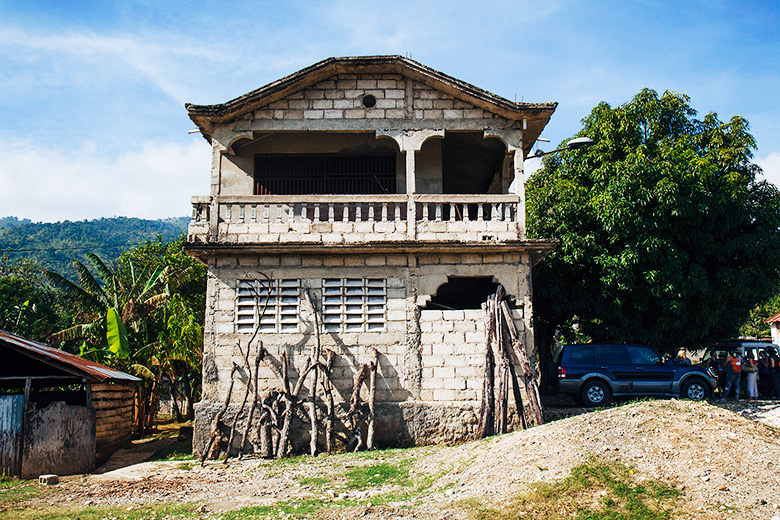 On our first official day in Haiti the group that Every Mother Counts had assembled—an ensemble of female entrepreneurs each with stories so unique, so wide and deep that they could fill entire libraries—climbed into a van that drove out of a small hotel in Mirebelais and ambled up the rocky streets into the countryside. The air was heavy with moisture and the scent of dirt and concrete, and each of us used one hand to steady ourselves as the vehicle swayed and collided with cavernous fractures along the road.

We were headed to a town called Cabestor, a place so remote that if you search for it on google maps you will conclude that it does not exist. In order to get there we had to stop inside a parking lot off of the main road, split up into two groups and climb into giant 4x4s. The craggy roads leading into Cabestor make it nearly impossible for any other type of car to navigate, and the jostling, 30-minute ride up and over giant boulders and down through gaping cracks made my Fitbit think that I had walked over 12,000 steps and climbed 170 flights of stairs.

MOMENTARY TANGENT: I gifted my mother, the Avon World Sales Leader, a Fitbit over a year ago and since then she has become completely obsessed. She’s 69 years old and averages over 16,000 steps per day. That’s, like, eight miles. EIGHT MILES. Isn’t there an Eminem song about this very thing?

She walks those steps mostly around her house. Have you ever met an Avon World Sales Leader who sits down? I DIDN’T THINK SO. I have not ever caught up with her weekly average, and when I realized that I’d be “walking” a ridiculous amount of steps that day I laughed out loud. Because I knew that when she logged into the app that night and saw my number she’d scowl, hop out of bed, and walk another three miles around her living room.

We finally arrived and parked under a towering tree sitting between a church and an abandoned stone building, a structure that will very soon become a birth center whose construction, supplies, equipment and first year’s operational costs will be funded by Every Mother Counts. The building is currently owned by that church, the local Sacre Coeur parish, and they are gladly offering it up so that it can serve this very specific need in the community.

I am very good friends with Erin Thornton, Executive Director of Every Mother Counts, and as we toured the building and peeked inside the spaces that would be transformed into delivery and postpartum recovery rooms I noticed the tender, almost tearful gaze that settled into every corner of her face.

When I asked her what she was feeling she said, “I have worked in advocacy and development for so many years, and when I’d go into towns just like this one and tried to explain why I was there they would always ask, ‘Awareness? What does that mean? What can you do for us?’ And essentially all I could say was that I’d make sure that the right people would know what needs to be fixed. But this… this… today is the first time I can say, ‘We are here to give you a building.'”

The significance of this structure and the needs that it will address cannot be overstated, for both the town of Cabestor and Every Mother Counts. I should first give you a little background on Every Mother Counts to explain why I say this.

EMC started out as an advocacy organization with the purpose of bringing attention to global maternal health issues. They saw a need for stories to be told from around the world to put a face to the challenges and barriers women are facing during pregnancy and childbirth. A few days ago I hopped on the phone with Erin to get the details of how everything has evolved:

When it was just Christy and I getting together we didn’t want to be a big organization. We almost didn’t want to take on the public facing campaign side of things. We didn’t want to reinvent the wheel. At first we went door to door, like, “Hey! Who is going to do public campaigning and raise awareness? Because we’d like to help.” But no one wanted to to it.

That’s when we decided, okay, we’ll do public facing campaigning. We’ll raise awareness amongst the general public. But as soon as we set out to do that we realized people were like, “Great! I’m aware! How can I help? What can I do?” That’s why we had to come up with the actions. When people want to help, they want to help directly. People want to raise money. They want to feel like they’re helping.

In December of 2011 EMC incorporated as a 501c3, and then in 2012 they started raising money which could then turn into specific maternal health grants. One of the first grants was to Midwives for Haiti which enabled that organization to train skilled birth attendants who work in rural community clinics. They issued a grant to Baylor Children’s Foundation in Uganda helping almost 20,000 pregnant women in need of transportation to health facilities. In Malawi EMC is helping WE CARE Solar to install portable solar power sources in 40 rural clinics that have no electricity.

This is what makes EMC such an exceptional group of people, the fact that they aren’t trying to reinvent the wheel. They are finding and researching organizations on the ground who are doing extraordinary maternal health work and making it possible for them to continue to do so. They are investing in the expertise of these groups. They are asking, “What do you need and how can we make that happen?”

Around the time that I traveled with EMC to Haiti last year, Midwives for Haiti expressed the need for more locations for women to go and give birth in the rural parts of the Central Plateau. There turned out to be such a need in the town of Cabestor, a community with a population of only 16,000 which, according to a 2013 survey conducted by physician Tom Fame and the organization Our Lady of Perpetual Help Haiti Project, found that 53 women had died during childbirth, 264 newborns had died, and in 45 cases both the mother and infant had died. The time factor for these numbers is not precisely known, but the numbers speak volumes and are helpful in pointing out geographical areas in that valley where there are clusters of maternal and infant mortality.

Tom has been working in Cabestor for over 18 years and via email shared with me the progress he’s seen during his time there, like the installation of two clean water systems, the building of three schools, funding for teachers’ salaries, and lunch for the kids. You can see the gorgeous valley and even get a glimpse of the church and future birth center in this video where he outlines how he’s working with the community to build hope and self-determination:

Storytelling remains at the heart of EMC’s purpose, and they are optimistic that these grants will bridge the community of people who want to help (people like some of you who have connected with EMC through the writing I’ve done here) to the women in need around the world. Through these grants EMC can essentially show “this is what it looks like” and “here is a barrier we are working to fix” and “these are the faces of this issue we’re talking about.”

I asked Erin on the phone again to expound on what she was feeling on that Sunday morning, standing on the balcony of the future birth center and looking out over the valley:

It was such a personal moment because my whole career I’ve been focused on development, but most of it has been through advocacy. Like, I TALK about development. I remember so many moments when I had to say, “I don’t have much to offer you.” It was like, I’m going to go back and talk about this and hopefully policy makers will pass a bill that will help you.

But to stand there and physically see that there will be a place where a woman will come and give birth and sit in the shade of this tree, and it’s going to be so beautiful. And it wasn’t there before. It’s all because of these people who have wanted to be a part of Every Mother Counts. It will exist because someone gave five dollars here and someone gave ten dollars there. I was just so moved standing there inside this thing that will be built directly because people were moved to help.

Yes, I am on the Board of Directors of EMC and I serve in an official capacity. I advise EMC in areas where my 18 years of online experience can offer perspective. But where this organization and I really connect is the storytelling aspect of their mission. That is the strength that I bring to the table, and I feel a very reverent, almost spiritual honor to have been able to see this building in person, to have witnessed Erin’s visceral reaction on that balcony. Because what started out as two women who just wanted people to know that far too many women are dying during childbirth has now reached enough ears and hearts to have procured a building that will save an untold number of lives.

Erin and Christy will punch me in the arm next time they see me for saying this, but it is a distinct privilege to count as a friends and colleagues women who have dedicated their lives to changing the world. On their behalf I want to thank those of you who have connected with them and been moved to help. You, too, are changing the world.

ADDITIONAL MOMENTARY TANGENT: I know I have mentioned this before but I developed an almost overpowering sense of direction during my childhood when thunderstorms would roll through Western Tennessee and bring tornado warnings with them. For months at a time I slept in the bathtub with all my stuffed animals (that is the safest place in a house with no basement) and quickly learned that those storms always came in from the west. I knew when I was facing west at school, the grocery store, at every friend’s house and especially when lying there in that bathtub overflowing with stuffed ducks wearing polka dot bow ties.

If I’m visiting a new city I can usually sense if I’m facing north or south, and if even if I can’t I can still figure out the general location of buildings or destinations. When we set out for Cabestor that Sunday morning I remember the driver taking a certain exit off of a roundabout, and then when we drove up to another city in the Central Plateau I noticed which exit off of that same roundabout we headed toward. Cabestor does not show up on google maps if you search for it, but I guess I’m little persistent (SEE: DAUGHTER OF THE AVON WOLRD SALES LEADER) because I figured out where it is and actually located the church and the birth center next to it:

Here is the region from a little farther up:

We are bringing them a building.