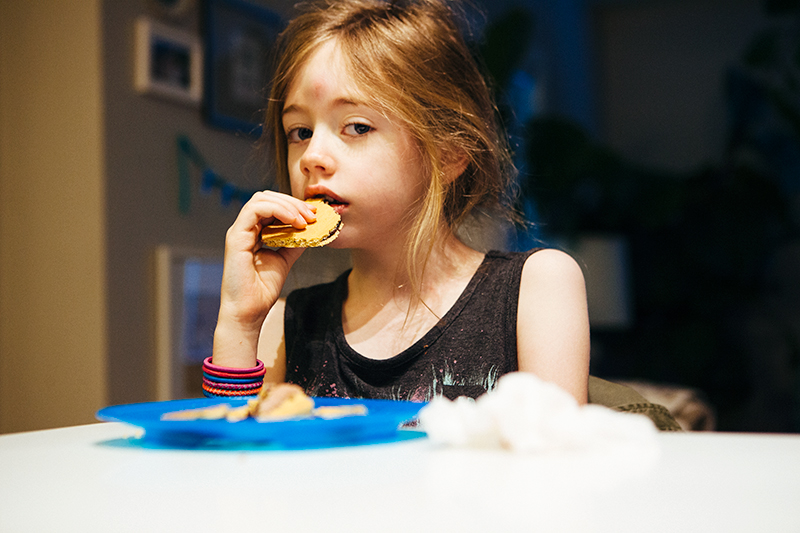 When people ask me why I remain living in Utah when I could do my job from anywhere on the planet—this after I have said again and again and again that my mother is why I stay here DUMMIES (not you, I didn’t call you a dummy, just all the other ones)—I mention summer nights and how they are quite simply divine. Temperatures rage during summer days, for sure, but they dip dramatically at night. Given the lack of humidity, you can sit on your porch with a cocktail in the middle of August and temporarily forget that it snowed as recently as the Fourth of July.

I always add a bullet point to this feature of Utah that goes something like this:

I grew up with bugs. My kids will not suffer the same nightmare.

I’m usually referring to mosquitos and other kinds of bugs that like to turn summer nights in the South and Midwest into a horror movie. I once saw a mosquito in Minnesota pick up a car. I shrugged because I grew up with mosquitos in Tennessee who would go on to run their own CrossFit gyms or become governor.

We don’t have those here, at least not the same variety of those who roam in sizes and swarms so big that they can threaten to destroy your entire wedding. Sure we’ve got some bugs, and his name is Jason Chaffetz. He’s much more of a threat to humanity than any mosquito carrying a potentially lethal disease, except the majority of Utah is far more worried about Hillary’s emails than a bigoted president who has bragged about sexually assaulting women and—is it just me?—or does anyone else think that the Russians have a picture of Chaffetz’ dick on their phone and are periodically reminding him that they like to leak information?

Which reminds me. I don’t know of anyone else who has a picture of a dick on their phone, Karen.

I got sidetracked. Pardon me while I get off the topic of weddings and dick pics.

A few nights ago Marlo was sitting in her bedroom when a mosquito landed on her forehead. Since this is such a rare occurrence, she didn’t realize what was going on or that she needed to swat it away as soon as possible, and now she’s sporting a giant bite the size of a quarter. ON HER FOREHEAD. As if to broadcast to the world, “My mother is lying about summer nights in Utah.”

I must have left the door open while taking Coco outside to play fetch, and one or a few mosquitos snuck into the house. This past winter was so intense, and how do I even describe this spring? There has been so much rain, so much unrelenting rain, that everyone here considered moving to Seattle to get some relief. My unprofessional opinion is that all this water is responsible for the onslaught of mosquitos, and oh. Look. The experts agree with me.

The night after a mosquito bit Marlo, I sat on my porch facing west as the sun set over the house across the street. The angle of the light let me see the thousands and thousands of particles in the air floating by—the pollen, the dust, the bugs, the innumerable seeds of dandelions dancing in zigzags from the blue that remained in the sky all the way down to the asphalt on the street—and realized, this is what we are breathing. And then some fuckface mosquito took a chunk out of my foot.

I was walking Marlo to her classroom yesterday when I reached down to scratch the bite on my ankle and mentioned it to her.

“Remember when I told you not to itch that mosquito bite on your head?” I asked her. Yes, I know the proper word is “scratch.” However, I am white and Southern. We have enjoyed a long and decorated history of avoiding that which is proper and doing that which is, in fact, quite the opposite.

She clung to my hand with her left hand and used her right to steady her backpack while she nodded. That was all the confirmation she gave me.

“Well, a mosquito bit my foot last night,” I told her, WHILE I WAS OUT STARING ARTFULLY AT THE SHIT IN THE AIR I MIGHT ADD.

“Congratulations,” she said nodding in my direction, and she did so without being flippant. She did it as if to welcome me to her club of Being Put Out, and she was happy I could join her. Then she smiled and told me, “We’re twinning now!”

We’re twinning now. I guess that is how the kids are phrasing it these days. I was just happy that she wasn’t all WOMAN. Your foot? Really? You can hide that thing with a sock or a shoe or I DON’T KNOW underneath a goddamn table while you converse with the human race. Try taking an arrow in your forehead and get back to me when the teacher calls on you in front of the class to answer a question about subtraction.