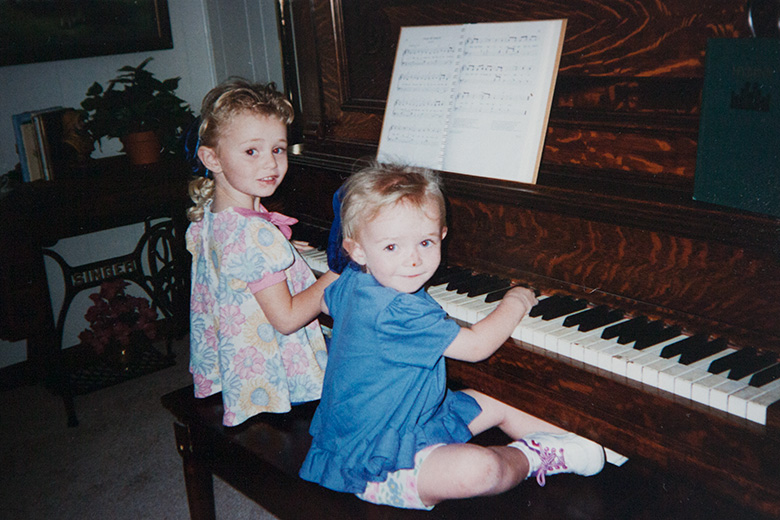 Today is my niece’s 21st birthday, and so this morning I sent her a celebratory text:

I first held Meredith the day I arrived in Provo, Utah to start my freshman year of college at BYU. She wasn’t even a month old and fit perfectly in my lap, a strange wriggling creature to me because I hadn’t had much experience with babies. I’d seen them on diaper commercials and knew that they pooped in a contraption attached to their body. Yet here I was holding one who was cooing and sporting the most delicate and perfect features. It was an awkward hold, for sure, and if she could have expressed her feelings she would have compared it to having a conversation with someone who has a giant chunk of a black bean stuck between two teeth.

I love all my nieces and nephews, but Meredith gave me my first experience with a baby.

Halfway through that first semester I offered to watch her and her older sister for the entire evening so that my sister and her husband could escape to a hotel to have hot and wild and raucous sex watch TV uninterrupted. You don’t realize how much you miss “Wheel of Fortune” until a baby comes along, poops in a diaper and ruins your life.

At about midnight Meredith began screaming and didn’t stop for the next four hours. Luckily her older sister slept through it, but I became inconsolable. I had no idea what I was doing. I held her and rocked her and patted her back and sang the lullabies my father used to sing me as a kid including “The Little Drummer Boy.” I know. It’s a Christmas song and I was singing it in what, October? Yes, that’s about as bad as Costco breaking out Christmas ornaments on Labor Day, but I loved that song so much. I called it the “Pum Pum Pum Song” and I sing it to Marlo every night and she has only once yelled, “YUCK.”

When all of that didn’t work I actually set her down for a second so that I could kneel down and pray to Heavenly Father and ask for his help. I used to pray about everything when I was a freshman and so very thoroughly Mormon. He must have been sitting up there in his kingdom shaking his head like, you do realize that there are entire countries racked with disease? That kids are walking around in shanty towns with no access to clean drinking water? That teens are being ripped from their homes and sold for sex? And you want me to bless your bowl of Grape Nuts so that you don’t choke. Adorable.

At about 4AM I finally gave in and called my mother who was still living in Tennessee at the time. She could barely hear me though Meredith’s piercing cries and my own tears. It’s been 21 years since that phone call so I don’t remember it word for word but it went something like this:

Me: “(even more incoherent nonsense except with desperation for emphasis)”

Me: “WHY DO YOU KEEP SAYING MY NAME IT HAS NOTHING TO DO WITH MY NAME!”

I will remind you that I was not medicated at this time.

She finally told me to hang on for another half hour and she’d figure it out. And figure it out she did. These were the days of no cell phones, or at least no cell phones smaller than a cinderblock. Somehow from her bedroom in Memphis my mother found the phone number of the hotel where my sister and her husband were watching “Jeopardy!”, got patched through to their room and explained that I was exhibiting a certain level of incompetence. How much incompetence?

“Your sister routinely asks the Lord to protect her from cereal.”

I have never in my life been so happy to see my sister walk through a door, and by the smile on both her and her husband’s faces I was even happier to know that I had not interrupted Final Jeopardy.

It was nearing 5AM and Meredith was still screaming. My sister cuddled her close and then calmly performed a quick examination of everything. She walked over to her cupboard, pulled out a small bottle and squirted a few drops of liquid from a dropper into Meredith’s mouth. A few minutes later Meredith let out an uncomfortable belch and then… silence. I begged my sister to cradle me and shove that dropper in my mouth.

21 years. That screaming baby is now old enough to buy alcohol although she never would AND I WOULD NEVER SUGGEST IT HEY MEREDITH I KNOW WHERE YOU CAN GET A KILLER DIRTY MARTINI SHHHH.