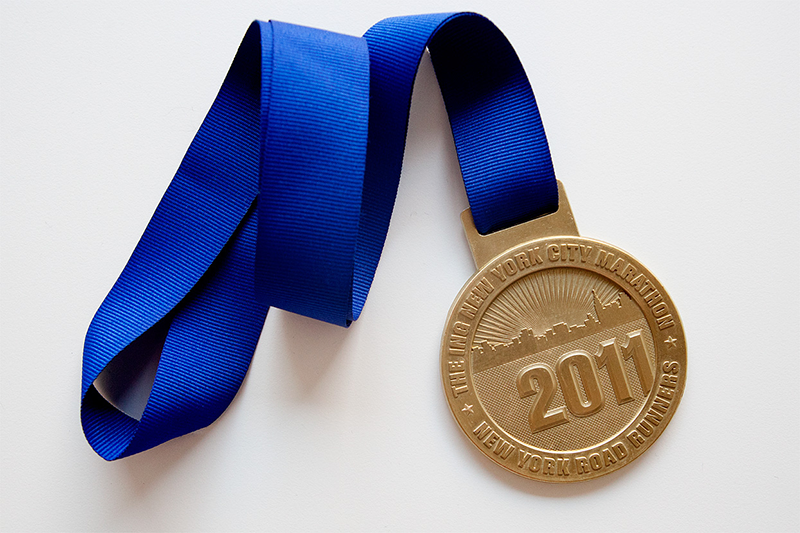 Hahahaha! Oh man! Remember that one time I ran the NYC Marathon in 2011 and broke every bone in my body, including my ankle at mile 22? I didn’t reveal that in the account that I wrote because I don’t know? It’s a weird thing to admit to people because you sound either rip-fucking insane or like an egotistical asshole: “I broke my ankle at mile 22 of the NYC marathon and I still managed to finish it. I also eat maggot-infested shark brains and won Miss Universe three years in a row but turned down the crown because the diamonds they use don’t require that anyone die while they’re being mined. BLEGH.”

You can read about that experience here: part one, part two, part three. Yes, three parts. Because I am dramatic as fuck.

Welp! I’ve run two marathons since then, several half marathons before and during training. And if you were to ask my honest opinion—despite destroying my body that first time and then destroying my mind the second time around—I’d whisper, “You must do it.” And then I’d stick my wet finger in your ear because you’d leaned in close to hear what I had to say, and I can’t have anyone being earnest around these parts.

NOPE. CUT THAT SHIT OUT.

Running a marathon, especially one in a city like New York or Boston or Chicago, is a once in a lifetime experience. It’s unlike anything you will ever do or endure or behold. What it teaches you about yourself and about other human beings—YES, others especially. You don’t think it would because it’s such a solo experience, but pain like that opens your eyes to other people where other experiences simply cannot. And not just in a I WANT TO CHOKE YOU WITH MY BARE HANDS IF YOU DON’T STOP SAYING ENCOURAGING THINGS AT MILE 19 sort of way.

And running for a cause? It doesn’t get better or more meaningful. I have four wet fingers in my ear having just said that. You’re welcome.

Yesterday I found out that Every Mother Counts has 15 spots left in the 2017 NYC Marathon. I ran with Team EMC that first time in NYC and then again in Tanzania, San Francisco, and Chicago (I wasn’t supposed to run the Chicago marathon because I hadn’t trained but I showed up and did it anyway, SEE? I am not rip-fucking insane!), and the reason I keep going back to a sport that so obviously disagrees with me is the almost literary connection between distance and the physical barriers so many mothers face around the world when it comes to basic healthcare:

One woman dies every two minutes bringing life into the world and up to 98% of these deaths are preventable? Many times, distance and lack of transportation prevent women from reaching lifesaving maternity care. Every Mother Counts runs to raise awareness and funds that help women reach the maternal healthcare they need during pregnancy and childbirth.

You can find out more at www.everymothercounts.org.

I won’t be running it this year—ALTHOUGH I AM TEMPTED—because of some Other Very Important Major Developments In My Life That Need Attention, and I can’t give proper attention to those things if I’m running an average of 20-30 miles a week. Also, my mother would murder me. Straight up, she’d show up to my house and bludgeon me with a hardback copy of The Book of Mormon. And I am not about to walk up to the judgment bar of God with THAT on my record. Let God judge me for the lesbian porn on my iPad. I’d rather flunk out of Heaven that way.

But this is your chance to do NYC if you’ve ever had the dream of doing it, and you’d be raising money for an incredible organization.

You should do it. The story you will have to tell after, that alone. That alone is worth it. And the crowds in Central Park as you’re finishing those last two miles? I can show up and tell them to shut up on your behalf. I’d do that for you. (You will very much more than anything in this world want them to shut up and they won’t, this is fair warning.)