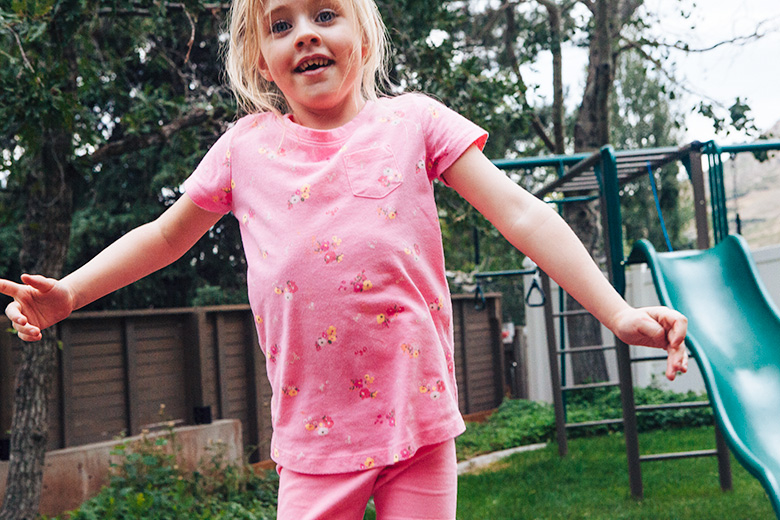 Last night during Marlo’s bedtime routine—okay, massive tangent here for a second, pardon me for the giant U-turn I’m about to pull: wait. Did I just use an em dash and a colon in the same sentence? I did. Holy shit, I did. You’re sitting there going, whoa whoa whoa, I come here for the fart stories NOT YOUR PUNCTUATED STREAM OF CONSCIOUSNESS, ENGLISH MAJOR.

Fine, here you go, but I’m warning you now that there is a colon coming: I have become my father when it comes to farting. God, I love saying that. I really hope he reads that out loud. My father does not like talk or recognition of bodily functions, and once when I was a kid I heard him fart in the kitchen and thought it was funny as all kids do. I was around the corner in the living room at the time and came barreling through the kitchen door with laughter about to erupt from my face only to be greeted with a look I imagine serial killers have in their eyes as they sew together the outfit they are constructing from the skin and hair of the person they have just strangled to death.

It said very succinctly and convincingly, “You heard nothing.”

We never spoke of it and this is the first time in my life that I am acknowledging that, oh yes, I heard something that afternoon. And it was LOUD.

I don’t think bodily functions are funny like I used to as a kid (or even five years ago), maybe because parenthood has wrenched all the fun out of it. All the diapers and throw up and potty training and running to catch poop as it comes out of my kid’s butt so that it doesn’t hit the carpet… uggghhhh. Not to mention dogs. Good god, dog farts are so not funny. Dog farts are chemical weapons. They clear rooms and ruin meals and break up friendships. I am in therapy over a dog fart.

Now when one of my kids hears me fart WHICH IS RARE and they point it out I say, “We should have your hearing checked as it is malfunctioning.” And then I turn back to the corpse on my table.

They will one day write publicly about the time that they heard it, and that’s fine. I don’t care. Because one day they will have kids of their own and endure the daily ins and outs of poop and pee and vomit and liquids spilled on every surface of everything that ever existed, and when one of those kids points out a fart their first inclination will be to yell, “GUESS WHAT. You came out of my vagina so technically you’re a walking queef.”

I don’t have any idea where the original tangent was going. DAMMIT. Not at all. Maybe I’ll remember when 75% of my brain is not occupied with making sure that the younger of my offspring does not get constipated. One day she will buy and administer her own fiber supplement and when she does I will dramatically smoke a cigarette on a balcony overlooking the sunset as the credits roll on my life.

I was reading her Silverlicious

, one of the many books in the Pinkalicious

This book is about how ungrateful Pinkalicious is when she loses her “sweet tooth”, how the tooth fairy who is off taking care of much more important business like, you know, someone’s emergency wisdom teeth removal, keeps sending other mythical creatures in her place. One of them is Edgar Easter Bunny who would normally be having an “eggstravagant vacation in eggciting Egguador” and is instead abandoning those plans because the tooth fairy called in a favor. Um, Pinkalicious. Listen. Stop there. HE DID NOT GO ON A VACATION BECAUSE HE HAD TO BRING YOU JELLY BEANS. I got to this point in the book and thought to myself, “You are making Veruca Salt look like Mother Theresa.”

Pinkalicious, of course, hates the jelly beans and then complains about “all the footprints the bunny left” around her room. I have read Marlo this book at least two dozen times, but last night she put her hand on my arm before I could turn the page.

“Those do not look like bunny footprints AT ALL,” she answered. Before I could ask her how to identify a correct bunny footprint she continued, “There was no bunny in her room. This doesn’t make sense.”

“What are you talking about,” I finally got out.

“Um…” it was getting late and I was in no mood and had no authority to argue over the anatomy of a bunny footprint, so I said, “Right.”

Do not look at me.

I do not ever say that to her.

Especially in the morning when she is screaming about having to put her shoes on and I tell her that even though I would like to take her to camp where she will see her friends and swim and play and, oh look, I even put a treat in her lunch! But she’d rather remain right there in a heap on the floor all by herself. Pity we aren’t on the same page.