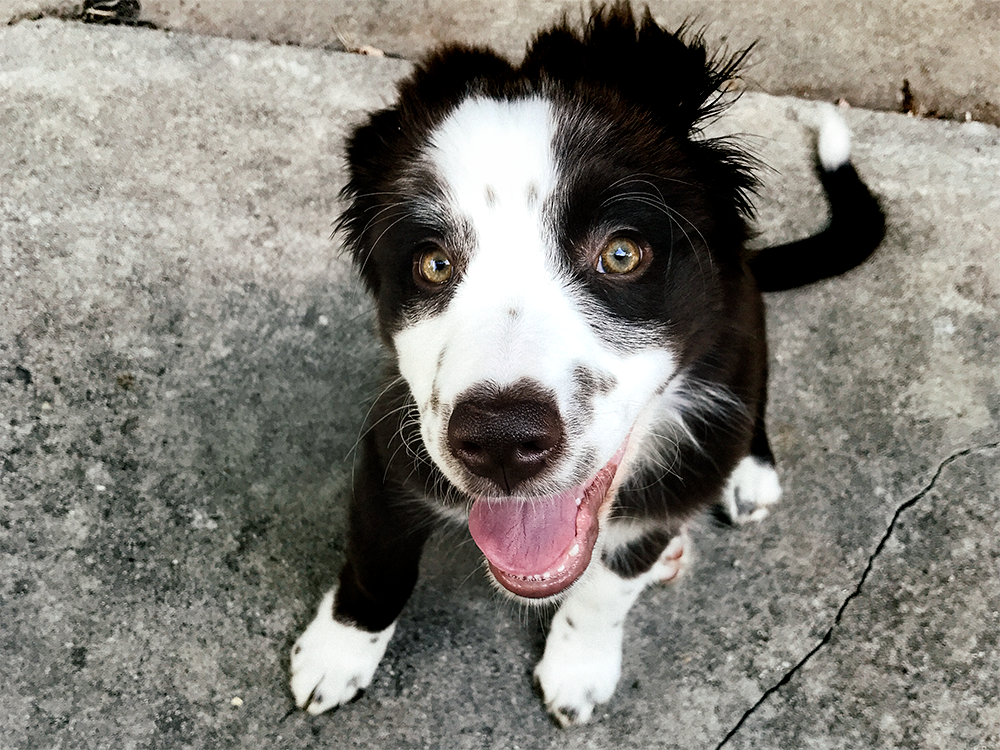 My neighbor adopted an Australian Shepherd puppy just a few days before I left for Paris despite the fact that she has frequently witnessed Coco’s attempts to take home the prize for America’s Next Top Asshole.

His name is Bandit, and he may not turn out as disturbed as Coco seeing that he’s being properly socialized with kids and loud noises and, you know, Coco. She has more than once said, “You come near my frisbee again and I will shove you into a milk carton and bury you down by the lake.”

And then added under her breath, “And no one will care.”

He’s about 15 or 16 weeks old now, and even though he’s still floppy and fuzzy like a puppy he became a totally different dog during the time I was away. He did what most puppies do after they get used to the weird lights and sounds and shapes of their new home: he discovered his mischievous side. Where he used to tiptoe he now throws his entire body with the intention that you will lose your mind trying to stop him. Watching owners lose their shit is a puppy’s greatest achievement. It’s what makes a puppy a puppy, and it is also why I believe that babies are far easier to live with. Babies at least don’t know they’re giving you a heart attack. But puppies? A puppy is relentlessly scheming to destroy your life.

I may or may not or maybe definitely have been using Bandit as leverage when talking to Marlo, She Who Would Rather Be Digested By An Eel Than Have To Talk On The Phone. If we’re FaceTiming she wants to do nothing but look at herself acting like a clown, and if we’re on the phone she’ll put it on speaker and walk away. I don’t take this personally—she does this with everyone—and if you’re sensitive she’ll make you feel like total garbage. Do not call Marlo if you want someone to tell you everything is going to be okay. She’ll yawn and tell you to go stick your face in a vacuum hose.

But, a puppy moved in next door. And if there’s one thing on earth that kid loves more than anything, more than a poop emoji, even, it’s a goddamn baby dog. So when I call her I’ve been all, “Hello—PUPPY. PUPPY PUPPY PUPPY PUPPY. Puppy. How are you—PUPPY. What? I can’t hear you—PUPPY.”

We made it to the four-minute mark once because I threatened to withhold the puppy if she didn’t answer a few basic questions: How are you? What did you do today? Are you excited about tomorrow? Can you fix me a hot dog? Who is John Galt?

What a present she has to come home to.