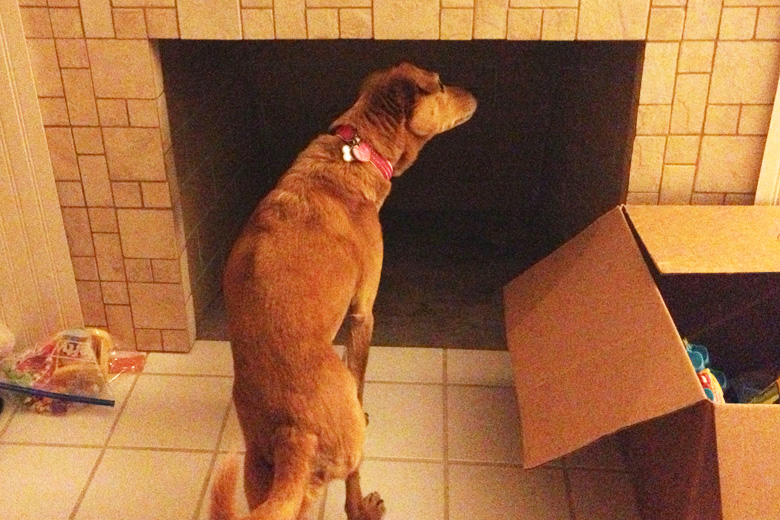 One night last week I was sleeping soundly when something started clawing its way across the roof over my bedroom. I say “clawing” because that was the sound that woke me up, a scraping so loud that I was certain a bear had mistaken the top of my house for a clearing in the forest. That’s where my sleepy brain went first: BEAR. Not a squirrel or a mouse. No. I thought it was a bear. Because when they are not hunting for food or fiercely protecting their young, bears are known to late-night roof hop in urban Salt Lake City.

Back in March when I walked through the house before signing the lease, the landlady said that she had once had a very unfortunate run-in with a raccoon in one of the chimneys, and that after they finally got rid of him she had all the openings capped. I nodded, remembered the fun that it was to host a raccoon, and made a mental note: CHIMNEYS CAPPED. Pun intended.

Two nights later I was in my room watching TV while Leta was reading herself to sleep. Suddenly she was running through my door, terror all over her face.

“There’s something in my fireplace! I can hear it!” she screamed.

I paused what I was watching and then closed my eyes to gather strength because WHAT. No. No no no. She said that the chimneys were capped. She SAID so. And if someone says something it’s always true.

I walked with her back to her room, sat on her hearth and told her to be calm for a minute. I tucked my head up underneath the flue and a few seconds later heard digging and scurrying and a tape recording of “I did not have sexual relations with that woman” on repeat.

Just to make sure that I was hearing what I thought I was hearing I decided to go get Chuck and gauge his response. He’s not normally allowed upstairs, a rule I instated in this house after he burrowed on every single bed and destroyed every single sheet set at the old one. So when I coaxed him upstairs he followed me very reluctantly, like maybe I was tricking him, like maybe I was going to get him up there and lock him in a room with Katy Perry.

That is, until he heard the noise for himself. Then he charged across her room to the fireplace and went bonkers, pacing in and out of it, pressing his nose to the flue. I had to shush his growling a few times because I thought it would wake up Marlo, but there we had it. SOMETHING was in that chimney. Something had knocked off that chimney cap and was scrambling around in the space beneath it. I should win some award for not immediately yelling OH MY GOD THERE’S A BEAR IN YOUR CHIMNEY.

Leta asked what we were going to do, and I told her that she’d need to try to ignore it. There was nothing we cold do until the following day, and whatever it was wouldn’t be able to get into the house because the flue was shut. Whatever it was and it most certainly wasn’t A BEAR.

“A BEAR! I can’t ignore that!” she said, pointing anxiously at the sound coming out of the fireplace.

“Well, you’re not sleeping with me!” I said while shuddering at the memory. “You can sleep in the guest room tonight. How about that?”

Hoo boy! The novelty! She instantly forgot that I even mentioned a dangerous, 1,400-lb woodland animal that could at this moment be living in our house. Now I’m getting Leta two things for Christmas: an ice machine from a hotel and another night in the guest room.

So, guess what, you guys:

Yeah. No caps. Not a single one. The chimneys were never capped. How can dooce live in a house with no caps?

Also, I’m surprised you can’t hear my heart racing in this photo. I’m terrified of heights. Also terrified of rodents with claws who can jump. Tyrant, however, is afraid of neither:

Both he and Dane spent over an hour up there and then inside the house next to the fireplaces figuring out which chute belonged to which fireplace and whether or not they could find any animals. Fortunately they found no bears. Unfortunately, they found no bears! Universe, if you’re going to keep sending these animals into my life can’t it be something exotic? Like a koala! SEND ME A KOALA. Just throw it on down that chimney. I’ll catch him in my loving embrace. And then I’ll lick my index finger and wipe the soot off of his forehead.

They didn’t find anything, in fact, and so to deter whatever it was that was in Leta’s chimney from coming back until a professional could make it out to the house, they improvised:

Dane and Tyrant need their own DIY blog. That photo has got PINTEREST written all over it.

(Before you go nuts saying that they trapped the animal inside, the professional came out today. He didn’t find a koala either DAMMIT.)

(Also, my gut tells me that this story isn’t over just yet.)

(Also, Universe. If you’re going to send me a koala, don’t be an asshole and shove it down the chimney. My address is clearly written out on my contact page.)