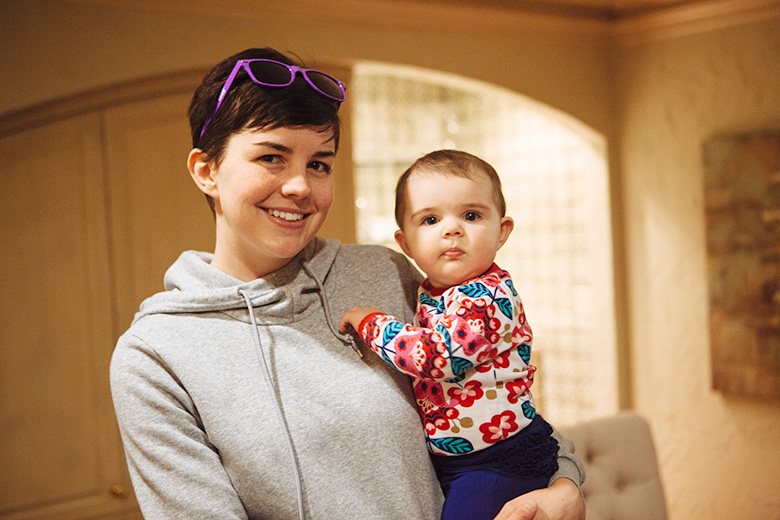 Sunday night my cousin McKenzie was returning home from a weekend in Wyoming and stopped by with her husband and daughter Maeve to say hello. Let’s just get the cuteness out of the way now because there is no reason to make you wait any longer. I mean, come on. She should just stop it already because, frankly, it’s obnoxious:

She’s better than a tumblr that’s full of nothing but pictures of kittens being cuddled by bear cubs.

Also, would you look at Shadrack and his hair? He grew that overnight. Seriously, he shaved his head and when he woke up the next morning he could fling his locks out the window. So obnoxious.

I had not mentioned that they were coming to either Leta or Marlo because I wanted to see what their reaction would be, I wanted the visit to be a surprise. We haven’t seen these guys since before the holidays, and I’m pretty sure that in that time Maeve quadrupled in size. I bet at her next checkup the doctor is totally going to reenact that scene from Jaws when he sees her head and will be all WE’RE GOING TO NEED A BIGGER TAPE MEASURE.

Leta and Marlo were in the living room playing a game on the floor when Kenzie arrived. Because there are always so many people here coming and going they didn’t even notice that the doorbell had rung. I mean, Tyrant is usually here, Dane is coming or going to school (although he is currently enjoying the snow in DC), and then there is the woman who shows up to fluff my pillow, the weird French guy I hired to carry me from room to room, and the other woman who routinely comes over to feed me grapes and fan my face when I fall over from the stress of watching “Downton Abbey.”

The three of them, Kenzie, Shad and Maeve, were standing in the middle of the kitchen and neither of my girls looked up.

“YOU GUYS,” I said. It wasn’t a shout. It was more of a loud pronouncement: “Hello, children of mine. Have you noticed that there is a bear cub standing right here and it is holding a kitten?”

Right then both girls looked up, and I could cry right now just thinking about their reaction: the screaming, the gasps, the glee. Leta was attempting to stand up but Marlo used her body as a ladder to ascend the couch and hop over into the kitchen. She could have just used Shad’s hair like Tarzan to swing from room to room. Instead she ran straight into Kenzie’s open arms. Within the span of five seconds she had given Kenzie an account of the last two weeks of her life including the fact that I had bought her princessth shoesth and a princessth pursthe and princessth earringsth which are real earringsth not the fake kind because only little girls wear the fake kind and she is not a little girl.

“You’re not a little girl,” I said flatly, ready to grill her with questions about taxes and utility bills.

“If you’re not a little girl that what are you? A tiger? A seal? I bet you’re a monkey.”

She put her hands on her hips and slowly turned to look at me. “I AM A HUMAN. WITH PRINCESSTH EARRINGSTH.”

The next generation of feminists is being raised by people like me. We are so screwed.

I immediately took Maeve and sat down with her in the middle of the living room floor. She’s passed so many milestones already and all she wanted to do was stand up and stare intently at whoever was doing the talking. I remember walking in on Kenzie once when she had Maeve lying on her stomach on the floor. She was, of course, making that horrifying mistake all first-time parents make by following the literature that encourages “tummy time” otherwise known as “encouraging your child to develop and subsequently ruin your life” time.

“If you continue to do that she’ll eventually crawl, walk and then immediately snort cocaine,” was all I could muster while I shook my head. What a disappointment.

Maeve is so much like Kenzie. Such a Boone. Dark hair, dark eyes, gorgeous olive skin, and so solid that you could use her to prop up the pickup truck sitting on your font lawn. The most adorable, joyous baby. Marlo kept eyeing me, watching me coo and make faces. Finally, when Leta joined in and started talking in a baby voice, Marlo looked intently at my hands holding onto Maeve’s waist.

She looked at the floor underneath Maeve and then back at my hands. “Sthee what happensth,” she dared.

Kenzie could not stop laughing. All the attention being poured onto someone else in the room, and Marlo did not have any idea how to process it. Oh wait. Wait. She did actually.

“Kenzie!” she said with as much enthusiasm as she could muster.

“Yesthterday Maeve came to my window. And I woke up and there she wasth. Sthtadning outsthide my window. All alone.”

“She what?” asked Kenzie.

“Yeah,” said Marlo her hands clasped now in reverence for her story, her face grim. She continued almost wistfully, “Sthe was all alone, waving to me from the window. It wasth her. Sthe wasth there.”

“Really. Sthe wasth there at my window.”

Um, that story isn’t creepy at all, Marlo. You woke up and a six-month-old baby was standing outside your window staring at you. WAVING. First, good job at reclaiming the attention of the room. Excellent work. Second, did I warn Kenzie or did I warn Kenzie? First it’s tummy time and next thing you know your six-month-old is sneaking out at night, stealing the car, driving 40 miles north and spying on people while they sleep. Good job on raising a criminal, COUSIN.