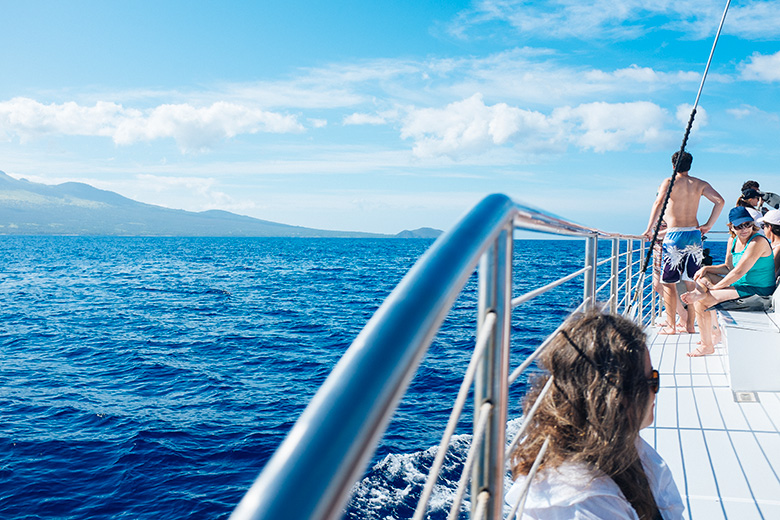 While I was in Maui with my girlfriends we all signed up to hop on a catamaran that took us on a six-hour snorkeling tour. It was the only activity that any of us agreed was worthy of leaving the beach next to our condo. No museums, please. No hiking, no driving through thick forests, no sight-seeing. We were far, far away from kids and work and taxes and online bill payments. We wanted nothing more than to relax and slow everything down to the speed of a 1990’s dial-up modem.

I’d adjusted somewhat to the time change, but the 7AM pick-up time did leave my eyes looking distinctly like a puffer fish. Appropriate, I thought, as we climbed into the van waiting for us outside the lobby. We were the first scheduled passengers, and from there we hit four other hotels to pick up eight more strangers on the way to the dock, a few of whom did not share in our… how do I even put this… irreverence? I think that’s the best word to use. I guess you could make this analogy: all of us would unconsciously make the jerk off motion in the middle of a sophisticated conversation to make a certain point. Those few people we picked up? They’d have no idea what that hand gesture means.

The hour-long ride that morning was uneventful most likely because everyone was still in the process of waking up. When we arrived at the marina and got in line for the tour, we were relieved to find about 50 other people who’d be joining us on the tour, many of them perfectly comfortable with this type of behavior:

PLEASE NOTE: That was Stacia’s first glass of champagne and you will notice that she had barely had half of it. The woman was completely sober. That is not drunk Stacia. That is the wonderful, confident, fun-loving, forever positive and insane Stacia. If you are ever hunted down by a frog, she’s the kind of person you want on the sidelines laughing at you.

The crew of that catamaran could not have been more friendly and helpful and, let’s be honest, tolerant. I kept forgetting that I was on a boat in the Pacific Ocean off the coast of Hawaii and not in a restaurant in Utah, and every time they poured someone a glass of champagne I kept freaking out:

Well shit. They didn’t serve them food with that beverage. There goes THEIR liquor license!

I had not ever been snorkeling, and at the first spot when I jumped in an had my first look underwater my immediate thought was, “I am moving to Hawaii to become a professional snorkeler.” So magical and mysterious and colorful and otherworldly. The five of us tried to stay close together, and I kept popping my head out of the water to scream, “HEY! HEYYYY!!! THIS IS AMAZING!!!!” Which explains why they all tried to drown me quickly floated away from me.

Within about twenty minutes, however, the subtle bounce of the water started to make me a little seasick, a strange turn of events considering I’d been on a boat in the ocean for well over two hours. I knew I’d need to hurry back or I was going to barf all over a school of yellow fish. It wasn’t alcohol as none had been served yet. It was a case of Awkward Girl From Utah Who Will Within Three Days Attempt To Baptize a Frog With Bourbon.

I spent the rest of the tour recovering from mild seasickness and trying to keep covered up under the sun. As the hours passed others joined me, and that’s when I realized why they keep these trips confined to only six hours. That’s a lot of hours. That’s plenty of hours. That’s more than enough hours. In fact, that’s far higher than most people can count.

Also, that’s anywhere from six to nine reapplications of sunscreen. If I had to make a list of all the things I hate about summer there would only be one thing on that list and it would be scrawled in my own blood: REAPPLICATION OF SUNSCREEN.

When we finally docked and headed back to the vans, you could see every passenger going, how did I get this tired doing nothing but relaxing? We climbed back into our vehicle with the same grumpy people who had accompanied us that morning, but at that point they had reached a dangerous level of prickly from being in the sun for six hours. Everyone else was afraid to breathe lest we make a noise that launched a full-on war. About five minutes into the ride home one of the girls in our group, Piper, made a quick phone call home to her daughter. She was sitting in the very back seat of the van and didn’t realize how loudly she was speaking.

“He did what?!” she suddenly yelled after engaging in some initial pleasantries. “Put your father on the phone!” She then put her hand over the speaker and shout whispered to us, “BRAD LEFT THE PUPPY IN THE HOT CAR AND IT ESCAPED.”

After the third “Brad” one of the prickly passengers physically turned his body around in the car to glare at her. She did not notice this and proceeded to finish her conversation wherein she defended her viewpoint (one I happen to agree with vehemently), that you can’t leave a dog in a hot car. Ever. Especially if it is small enough to escape the tiny amount of space between the top of the window and the door that you thought would give it sufficient ventilation.

Except I don’t think those grouchy passengers were listening to her solid logic because I could see the blood boiling underneath their skin. They were so annoyed and right then I crowned Piper my hero. So high was she in my esteem for schooling Brad about animal safety while risking her own life in that van, that when we finally dropped off those awful people, I turned to everyone else in the vehicle and said, “Brad… Brad… Brad… Brad… BRAD!” There wasn’t a dry eye left in the van after that from the relief of being able to laugh out loud.

Twice since our trip to Hawaii I have taken a photo of a dog locked inside a hot car and group texted it to all the girls with this attached: “#BradBradBradBradBrad”

It was inevitable that I take it to Instagram:

If you’re on Instagram and ever see a dog locked inside car on a hot day, now you know what to do if you’re feeling helpless on its behalf. You’re not shaming people. You’re making someone somewhere reconsider it.