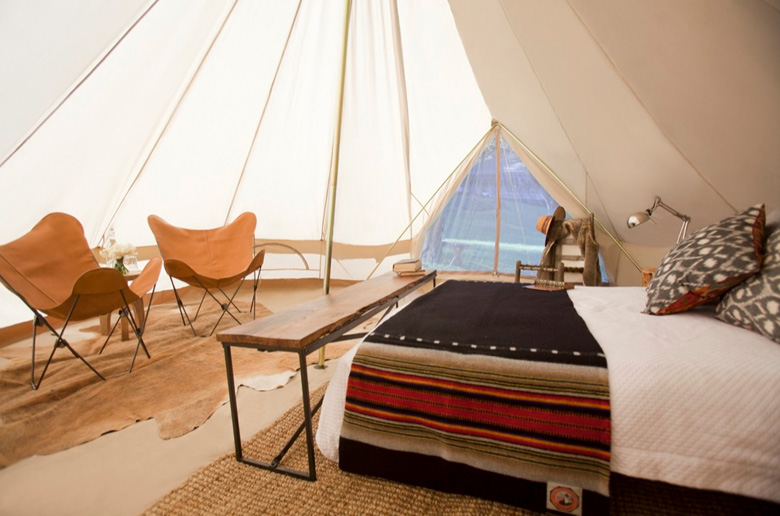 As part of the campaign that I worked on when I took the kids to Arches, I was invited to take both girls to an overnight event at Rancho dos Pueblos, a gorgeous area along the beach in Santa Barbara. The event is considered a playdate where we’d be camping. Yeah. Okay. Right. As you know, camping is not an activity with which I associate positive feelings. Sleeping on rocks and pooping in a hole in the ground? And then a bear comes up and is like, hi. I’m here to eat you. But first I need to rip all of your limbs off. While you’re still alive.

But then they revealed that it wasn’t going to be “camping” camping, it was going to be luxury camping with real mattresses, comforters and pillows. Bedside tables. Area rugs. So I said, you know what. I am SUPER open-minded. Also, I hear the bear population that lives on the beach in Santa Barbara is pretty laid back.

Before I said yes to the trip I wanted to make sure that it would be okay if I made the outing something special for just me and Leta, a memory that she I and could share specifically. Not that Marlo would ruin anything, but Marlo tends to ruin things. The logistics of making sure she didn’t topple entire tents or collect everyone’s underwear and run it up a flagpole would interfere with the attention I could give to Leta. So we’re making this a mother-daughter trip. Maybe later this year Marlo and I will visit an abandoned building and throw rocks through the windows so she can say that she and Leta are even.

This trip takes place at the end of April, and here’s the cool part. There’s a chance for a family of four to win a spot and join the rest of us at this event. Airfare, hotel, transportation, and the full playdate package (along with camping) are included for the winner. Insert some exclamation points. How about six: !!!!!! Here are the rules:

1. Register here by entering your information, including your Pinterest Username.

2. Pin your favorite photo from the Hyundai Santa Fe Pinterest Board to your own “Hyundai’s Epic Playdate Weekend” board.

3. Pin four or more of your original photos to your board showing them your ultimate playdate and where the Hyundai Santa Fe would take you.

Four Grand Prize packages that all include a trip for four to Los Angeles to attend the Epic Playdate will be awarded. We’d love to see you there!

The official rules are here.

Just now I showed Leta a picture of the tent and I braced for, “But that’s not Disneyland!” Instead she clapped and squealed, “We’re going there!” Yes! Yes, we are. And no worries. The bears will all be surfing.