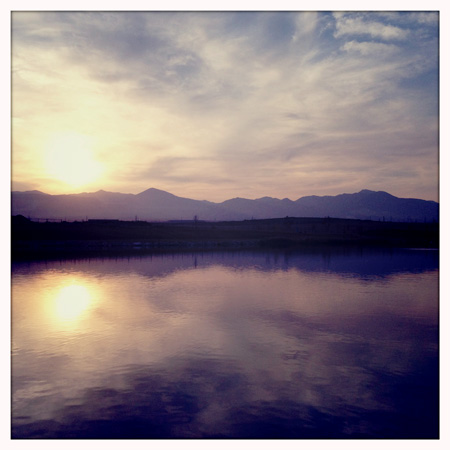 Saturday afternoon I took the girls to see my father’s new house out on the southwest side of the valley in a neighborhood that abuts a planned community with gardens, parks, swimming pools, and a freshwater lake. Toward the end of our visit we drove to the lake so the girls could play in the sand and dip their feet in the water, a more than monumental outing considering that Leta wouldn’t touch grass or sand for the first four years of her life. Just this year she started breathing air.

The sun dipped below the Oquirrh Mountains as Marlo grabbed handfuls of sand and threw them in the water. Each time she grunted in frustration when remnants of wet sand stuck to her fingers, bits of earth wedged between each knuckle. She’d shake them violently only to reach down and grab another clod. I watched her repeat this whole sequence six or seven times until she finally yelled, “UUUUGHHHH! The sthand won’t come off!”

It was getting late and we had a long drive home, so I gathered them up and headed back to a bench where my father and stepmother had been watching us. Sand was stuck to the girls’ feet, up past their ankles, and both of them were freaking out about getting their shoes dirty. We all tried wiping the sand on the grass and dusting it off with our hands, but steadfast little bits remained on the bottom of their feet. I finally had to tell Leta, listen. Don’t worry about it. We can walk to the car without our shoes on.

“WITHOUT OUR SHOES ON? But that’s crazy!” she said.

“Have you not met me before?” I asked. “Crazy is named after me.”

Right then a guy sitting on a nearby bench yelled out, “Hey, are you guys from the South?”

My father nodded. “We are, in fact. We’re from Tennessee. How did you know?”

“I can hear your accent,” he explained. “I’m from Charlotte. How long have you been in Utah?”

My dad did the math in his head and said, “About seven years.”

“I’ve been out of the South for almost 20 myself,” I said, having done my own HOLY SHIT I’M HOW OLD? math.

He chuckled, pointed at me and clarified, “Your accent is the one that gave it away. You’ve been away for how long and it’s still that thick?”

“LISTEN.” I said and pointed right back. “Do you have kids? Because I guarantee you that a mother born and raised in the Bronx gives instructions to her children with a Southern accent, hon.”

He laughed, nodded his head and agreed, “True, true.” I could hear North Carolina in the way he chewed his vowels.

“Nice to meet you,” I told him as I motioned Leta off the bench. “We best be goin’ cuz it’s close tah bedtime and the chillins fixin’ tah get cranky.” And then I imitated the sound of a banjo.

We walked to the car in crazy barefoot style, and while I strapped Marlo into her seat Leta secured her seatbelt. She was shaking her head as a giant smile spread across her face. I asked her what she was thinking.

“You DO talk that weird way every time you tell me to do something. So much makes sense now.”