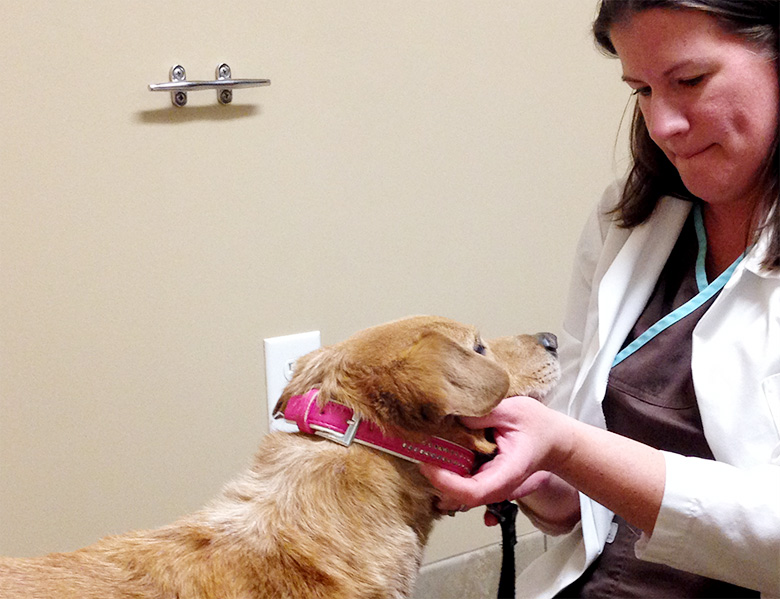 Monday afternoon just minutes after Chuck’s unexpected seizure I walked him into the laundry room where I keep all the canine paraphernalia: food, FURminator

, various treats, leashes, and black eyeliner. Chuck may not be considered one of those “smart dogs” who could herd a field of sheep into a tiny pen, but he pays very close attention to little details. He noticed that I had removed only his leash from the cabinet and immediately altered the jet stream with the wind produced from his wagging tail.

He knew this meant we’d be heading to the vet, his favorite place on earth. I have very rarely taken both dogs to the vet at the same time because they have such conflicting feelings about that institution. When I have done so I usually end up stuck in the parking lot, Chuck pulling me toward the door, Coco yanking me in the opposite direction to the nearest cliff from which she can fling her body.

Chuck is normally mild mannered and well behaved, and people who are unfamiliar with the names of my dogs often refer to him as “the one who isn’t crazy.” I find this funny because I guess it depends on your definition of crazy. Chuck has been known to sit perfectly still in the living room staring at guests in such a creepy way that they will comment that they feel uncomfortable, like he’s stealing their soul or plotting their imminent death. Coco’s trainer once watched the two of them for a few days, and when she returned them she was shaking her head heavily.

“That ain’t no dog,” she said pointing to Chuck. “That there animal stared at me for two hours straight and I didn’t feel safe going to sleep that night.”

When I got within a few blocks of the vet, Chuck began whimpering in the back of the car. Not because he was scared or anxious, but because HE COULD NOT WAIT! If I had stopped the car right there he would have jumped out and run the rest of the way. I was worried that he was showing so much excitement in such close proximity to experiencing a seizure, but I had no idea what to do. He and I are so much alike that I suppose I could have told him we were instead headed to Disneyland and watched as his grin quickly morphed into a frown. ANYWHERE BUT THERE.

By the time I parked the car he was screeching with excitement, and when I opened the door he bolted out so quickly I almost didn’t have time to grab the end of his leash. He dragged me to the front door and hopped up on the the glass with both paws. I spent several minutes wrangling him, attempting to get him to calm down and obey orders before entering the building. It was embarrassing how flagrantly he was ignoring me considering how many episodes of “The Dog Whisperer” I have watched. And the Cesar Milan poster I have hanging over my bed. Fine, IN my bed.

Chuck acted exactly like a bucking bronco the entire time I checked in, the whole time the technician tried to assess his weight. The vet is basically a car wash but instead of water, dog treats rain down from the ceiling. This is at the core of why he loves it so much, but he could at least act his age and receive a treat with the tiniest bit of civility and not try to eat the hand of the technician holding it. What, he’s 84 in human years? Is that right? Imagine an 84-year-old man wearing a Sex Pistols t-shirt with the sleeves ripped off trying to get away with riding a skateboard through a library.

It was a slow day, apparently, because they walked us back to an examination room right away. The nurse gave him treats immediately, and if only you could have witnessed the sound of that dog’s tail swatting the door and and walls and floor: THUNK THUNK THUNK THUNK. It didn’t stop. It wouldn’t stop. As the nurse walked over to grab a thermometer, the kind you stick up a butt, she said, “Oh, look at that tail. I know you think this is a cookie, but this is certainly not a cookie!”

She knelt down and had to navigate around Chuck’s windmilling tail to insert the device, and I swear to god the look on his face was a gleeful, “LOOK! I HAVE A THERMOMETER IN MY BUTT!”

Like, it made his whole day. It was the best thing to happen to him in months. A thermometer. In his butt. The grin on his face upon having a thermometer thrust into his butt made me think, “I didn’t think the Internet could love this dog more than it already does BUT OH I AM SO WRONG.”

The vet had already entered the room, and after I described what I had witnessed she did a thorough physical examination of all his limbs, his face, his mouth. She tested both eyes extensively and noticed his left eye was a little cloudier than normal, a possible side effect from the whole episode. I know my eyes get cloudy when I stick things up my butt.

She talked about possibilities: could be his liver, possible toxicity. Had he gotten into any medication? Eaten plants he shouldn’t be eating? She didn’t think it was epilepsy. Could be something neurological. Could quite possibly be a one-time incident. She’d take him back to draw some blood, test for several scenarios, and then we’d go from there. While waiting for the results I should take him home and watch for the following signs of a worsening neurological condition:

Do you see number six? When I got home and showed this to both Dane and Tyrant we all burst into simultaneous laughter. His reaction to the vet is a total anomaly. Chuck doesn’t get excited about anything. A bomb could go off right beside his head and he would loudly pronounce in English, “Unimpressed.”

Is “condescending asshole” the sign of a worsening neurological condition?

I kept a very close eye on him all day, and I was right when I said that any loud or unexpected noise sent my mind reeling. Leta moved a stool in the kitchen and I came running thinking he was having another seizure. Every thud, bump, squeak… every noise made me panic. I can’t thank the Internet enough for sending me stories and tiny snippets of encouragement. So many stories of dogs experiencing seizures and having positive, manageable outcomes. Some had sad stories to tell but found hope that Chuck would be okay.

Midway through the day on Tuesday the vet called to say that the blood work could not look better. They had run several tests that they had not run on previous blood work six months ago, and if she were looking at it blindly she’d say it was from a dog half his age. Nothing abnormal to see. Steps from here: keep a close eye on him. If it happens again we can circle back and decide on a plan.

And so that’s what we’re doing. Even Marlo is giving him extra hugs and telling him not to “bang into the walls anymore.”

I am just like everyone else who gets caught up in the tedious minutia of everyday life forgetting to stop and offer gratitude for the fleeting time we have on this planet with the ones we love. It’s a shame that it often requires something like this to remind us to do so, to force us to remember that it could all be gone in an unexpected and tragic instant. That Chuck has been spared a bad diagnosis is his gift to all of us.