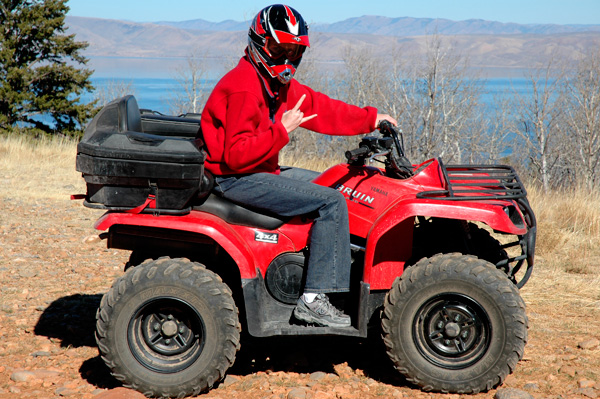 Against my better judgment Jon convinced me to hop on this four wheeler during our weekend at Bear Lake. I was wary for a couple reasons: 1) possible death by mini-monster truck, and 2) I am Southern and redneck, I can’t just go around perpetuating stereotypes.

Yet, the moment I straddled my legs over the pulsating black seat I could feel the spirits of my dead redneck ancestors crushing beer cans against their foreheads, ancestors who raced on the backs of giant boars. Within a few hundred yards I had the hang of it, but I was still a little tentative when we found a man-made dirt hill on the back side of the mountain. Jon immediately charged his four wheeler up the hill and propelled himself several feet in the air, kicking up dust and convincing my ancestors that she done caught herself a right winner! MORE BEER!

But there was no way I was going to risk being crushed to death by a vehicle, at least not by one that doesn’t have JOHN DEERE on its bumper. I approached the ramp a few times and chickened out each time, but Jon wasn’t letting me go anywhere. I finally took a deep breath, closed my eyes, and gassed it just enough that I barely caught an inch of air. It was like a Smurf jump. Totally humiliating and at the same time one of the most exhilarating risks I’ve ever taken in my life. This should explain why I made such a good Mormon.