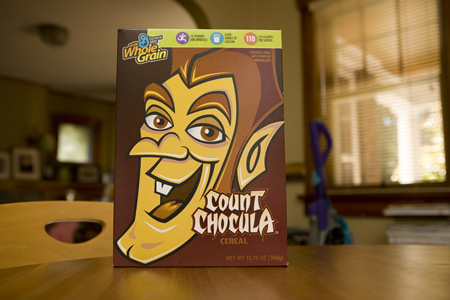 Festive Halloween Cereal, oh that every morning could begin this way:

The winter is cold without Franken Berry.

During the four years I spent in college I collected over a hundred limited edition cereal boxes because I had a lot of free time that I was not wasting on other things, like being a normal human being. Cereal was one of the only things I ever ate during that period of my life because I was a devotee of the low-fat diet. And cereal, it is low in fat, much like it is low on the list of Hobbies That Will Get You Laid. Some people rode mountain bikes, others played guitar, I collected special boxes of Corn Flakes. And would bring dates upstairs to see the giant ball of lint I had harvested from my belly button.

That last part isn’t true, but you’re thinking, if anyone is capable of such a thing IT’D BE HER.