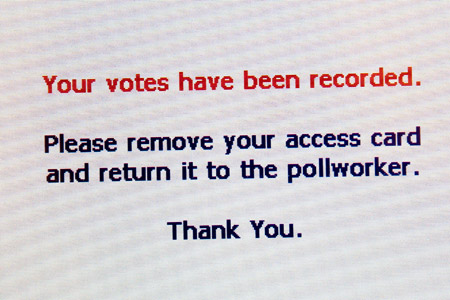 They done got computers in this town!

While talking to my father on the phone this morning I asked if he had made it out to vote yet, and then remembered, oh right, this is my father, Most Righteously Indignant Republican On Earth, and that he had voted early, as early as legally possible just to make sure that our democracy would feel his love, his very heterosexual love. I have a feeling that my father thinks that Utah isn’t republican enough, although study after study has shown that Utah is the reddest state in the nation ahead of Texas, even. A part of me gets a certain thrill out of this little piece of trivia, because Texas likes to own the superlative to everything, loves to be the biggest and best, and here is this inbred, farming community in the desert where men regularly marry their 13-year-old nieces, and we done snagged the blue ribbon prize on this one!

I get a lot of email asking what it’s like to live in the state that can proudly call itself the most conservative place in the country. I don’t know, I imagine that this is what it feels like to win first place at the county fair for the most delicious-looking pig.

My dad asked if we had voted yet, and at that point in the day we hadn’t. I told him not to fret none, because the day would not end before I had done my civic duty. And not just because it’s important to vote, but because the most motivational aspect of this here democracy is the fact that my vote? It will cancel out his. And I take a little too much pleasure knowing that when he lies down to go to sleep tonight, he’s going to linger a few seconds on the infuriating thought that because he contributed to the birth of such a liberal daughter, he most likely has a sperm or two or twelve hundred in his body that, if given the chance, would vote in favor of gay marriage.