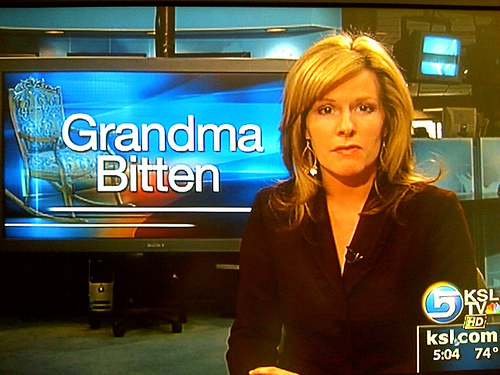 But, where is the 13-inch black and white television tuned to “Who Wants to Be A Millionaire” ? Where is the Avon hand cream that smells like oatmeal? Where is the dog-eared copy of Chicken Soup for the Soul?

I’m trying to figure out the thought process that went into making this news graphic, and all I can come up with is an exchange between the producer and an intern, where the producer is all, so this kid attacked his grandma because she took away his car keys, and the photos of her gnawed-off hand are too gruesome to show on air. Let’s find some clip-art instead, I don’t know, something that says “bitter invalid routinely ignored by her asshole children.” So they dug up the image of an elaborately upholstered Victorian chair. That intern has the best job on the planet.