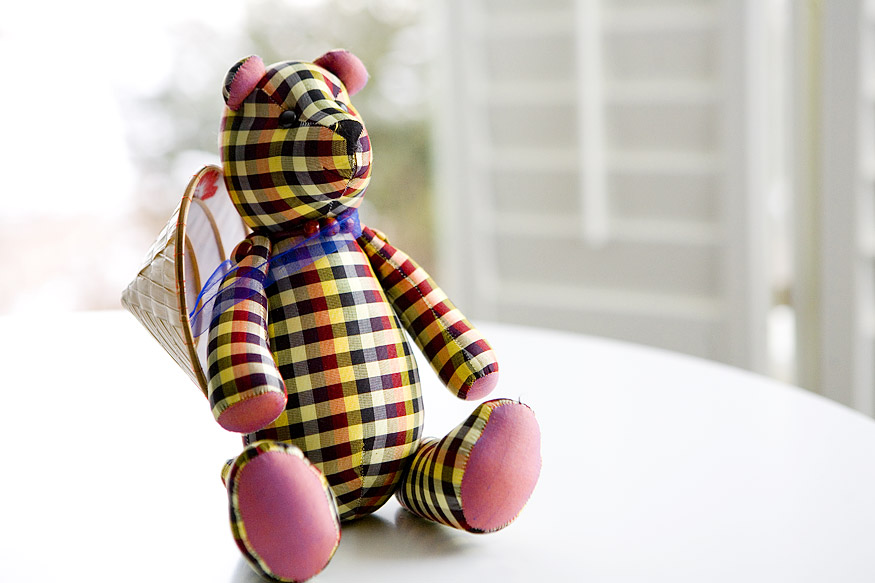 There’s a story behind this little bear, also known as Asian Bear to Jon’s side of the family. Every Christmas we gather at his sister’s house for a gift exchange, “we” meaning all 45 members of the extended family, and we all throw a white elephant gift into a pile in the middle of the room. We take turns picking out and opening a gift, and if the person whose turn is after you likes what you’ve opened they can steal that gift from you. If you don’t like what you’ve opened and no one else does either, then you’re stuck with that gift and you have to shut up and pretend to be happy about it. This happens often.

Jon’s 20-year-old nephew opened several gifts that were very wrong for him, a copy of High School Musical 2, a box of cake mix, a few bottles of hand lotion, and luckily for him someone in the room always wanted what he had so that he could open another gift and maybe get something more appropriate, like perhaps a gun.

He had one more chance to get something he could use, and inside that last gift was this Asian Bear, hand-made in Vietnam, brought back to the states by his brother who has traveled in the military. The entire room erupted with laughter, and everyone started chanting, “ASIAN BEAR! ASIAN BEAR! ASIAN BEAR!” Poor thing was going to have to go home and snuggle with this bear while his other cousins got to go home with a new Xbox 360 game or a robot that shoots lasers. So I told him I’d take it off his hands and he could have the 4 GB memory stick that I opened, because what am I going to do with that? Decorate it with satin ribbon and hang it on the wall?