Last week I posted a picture of Chuck with a round swath of soot on his forehead and explained that for the last two weeks he’s been standing with his head inside the fireplace for hours every day. But because we couldn’t hear anything or smell any rotting carcass I just assumed that it was a new habit of his, an adorable habit, and when I walked into our bedroom to find him just standing there silently, his entire head and neck disappearing inside the top of the fireplace, I was all, how cute is that dog? WHO’S A GOOD BOY WITH HIS HEAD UP THE CHIMNEY!

But many of you sent me email to urge me not to take such behavior lightly. Do not ignore your dog, you said. Your dog is trying to tell you something, you said. And then you started sending me stories about how your dog started barking at the fireplace and two days later your entire house was filled with bats. And that’s all you had to do, mention the bats, because if it could be bats then it could also be a family of squirrels. And if it could be a family of squirrels then there’s no reason it couldn’t be AN ADULT OPOSSUM. And if that was the case then I was going to call up that restaurant in Austin that puts bacon in their refried beans and order a serving for 12, because the guests at my funeral were going to be hungry after seeing the frozen look of horror on my dead face.

So Jon called a few chimney sweeps, got some bids, and scheduled someone to come out and take a look at our chimney on Friday morning. And a few hours before he showed up Chuck went from standing silently near the fireplace to growling at the fireplace, code for: I’M NOT KIDDING ABOUT THIS. Chuck only growls at Coco when she’s trying to steal a rawhide bone out of his mouth, and maybe sometimes at horses, okay definitely at horses, because there was that one time I thought it would be funny to drive slowly by a barn to see how Chuck would respond to all the animals. And he growled, all right. But he was also so scared of the horses that suddenly an inconvenient grease shot out of his butt, and because he was sitting in my lap at the time that butt grease ended up on my shirt, and in that instant I was very upset that humans were born with noses.

Then he said that once he nudged him a bit with his tools the raccoon would either a) fall off the chimney or b) run away scared. Let’s look at these options for just a second. A) There is no way a raccoon could survive that kind of fall, and b) B doesn’t even matter when A is a possibility. So I said to the chimney sweep, look, I am not about to let you go around killing wildlife, can we just let him continue living in our chimney? All he wants is a few warm cuddles, why not leave him alone! We could adopt him and let him sleep in our bed! I’d name him Percy Twinkles Armstrong and take photos of him wearing Keds.

That’s what this family was missing! A raccoon! THAT WE COULD ANTHROPOMORPHIZE.

The chimney sweep looked at me and then looked at Jon like, ummmm… And that’s when Jon was all DO NOT PAY ANY ATTENTION TO THE INSANE WOMAN STANDING BESIDE ME.

So I guess there are all sorts of reasons you shouldn’t let a raccoon live in your chimney. Who knew? I won’t get into that long list here, but one bullet point on that list is the fact that the raccoon would use your chimney as a waste receptacle. That’s all I needed to know. If that’s not a good enough reason for you then you should probably go out right now, adopt a puppy and let her poop all over the inside of your car. That bullet point will instantly make sense.

Now, I haven’t ever been a chimney sweep, but I imagine they see all sorts of wacky things inside people’s fireplaces. Birds, nests, that uncle who went missing, so you’d think a raccoon wouldn’t be that big of a deal to him, right? WRONG. When he saw us heading outside with our camera I think he realized, dude, I never get to see the animal scurry out of the chimney. I bet it’s more awesome than NASCAR. So he went and got his camera, screwed it to a tripod and set it on our neighbor’s fence. I don’t know why that made me so happy, to see him so excited about it, maybe because a situation like this was exactly why he became a chimney sweep in the first place. Or I guess he could just be a huge fan of soot.

So he grabbed all his equipment and headed down into our bedroom while we stood out in front of our house waiting for some crazed raccoon to shoot out the top of our chimney. Five minutes later he ran out the front door, breathless, and said, “DID YOU SEE IT?” 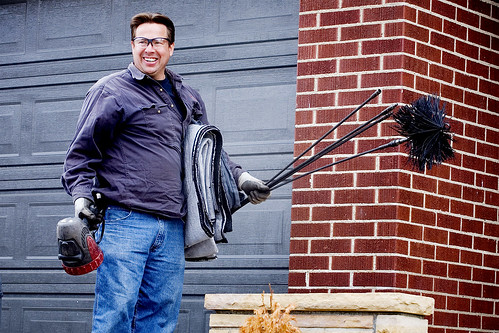 Um. No. The invisible raccoon managed to escape unnoticed. 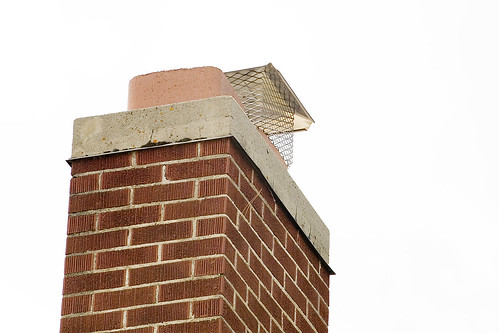 He scratched his chin, said he’d go back down and nudge him a little harder, and thirty seconds later we saw a foot: 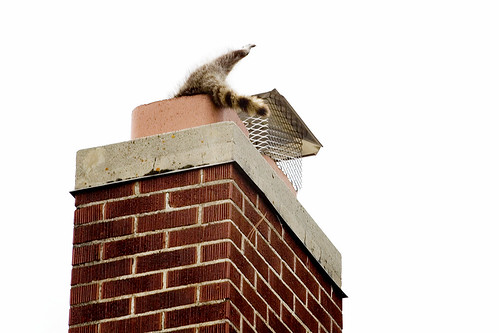 And then another foot: 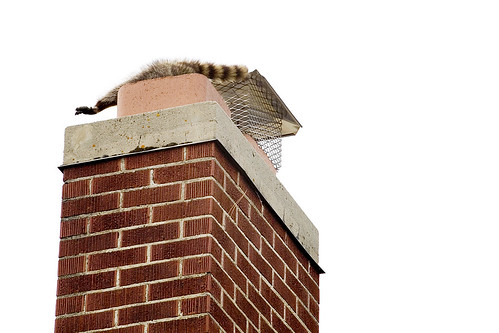 And then the whole raccoon emerged. Indeed, he was rather large: 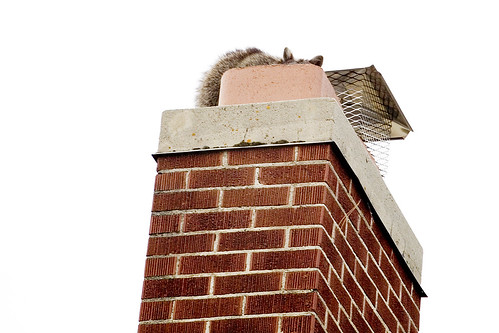 I held my breath waiting for him to fall to his death, but he just sat there and peered at us over the top of the chimney: 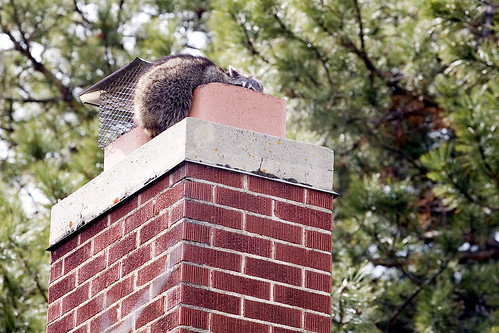 This went on for what seemed like hours but was actually only a few minutes, the raccoon sitting calmly on the chimney. I wished so badly that I knew what he was thinking and came to the conclusion that he was assessing whether or not he could take us. Should he climb down and find another place to live, or would it be worth it to jump off like a flying squirrel into my face, just to watch me die from shock. He was weighing his options.

And then without provocation he turned and slowly scaled the chimney down to the roof and off into someone else’s life: 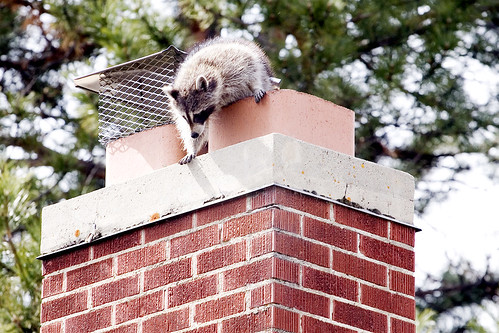 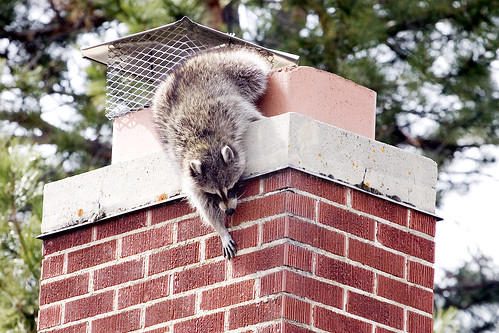 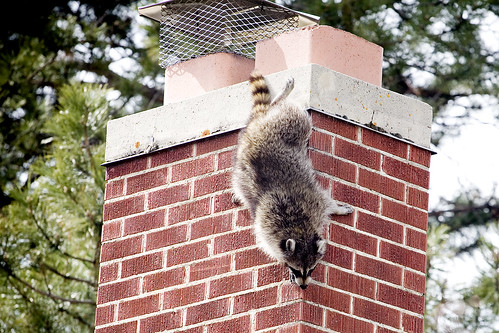 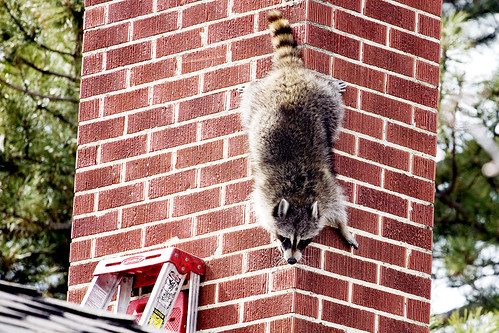 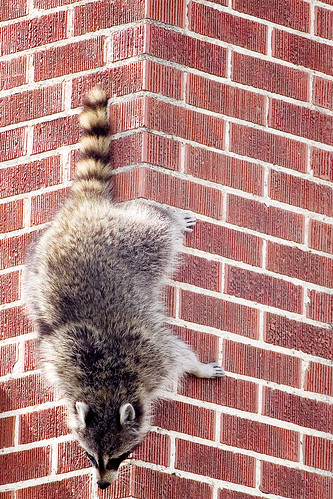 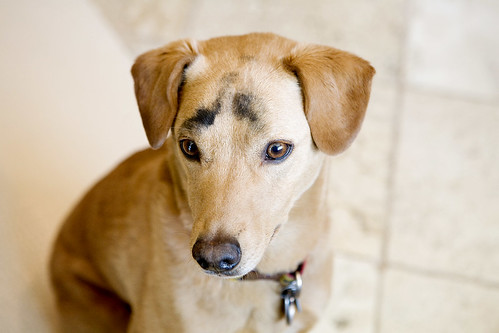 (all photos taken by Jon with our telephoto lens)