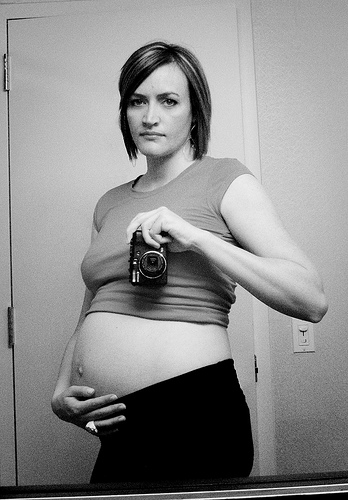 I’m a bit late with this, but last week marked my 28th week of pregnancy (today actually marks the 29th week). I took this photo in the bathroom of my hotel room in New York: I don’t know why I’m even telling you this, but that was the first hotel room I’ve ever stayed in while visiting New York that had an actual bathtub. Most rooms are so tiny that there isn’t enough room to drop in a tub, so when I walked in and realized just how big it was, that I could turn a full circle in the bathroom without banging my knees into the toilet, I felt like such a rock star. Like yeah, bitches! I’ve got A TUB! IN MY HOTEL ROOM! What have you got? A stand-up shower? Some towels? A bar of free soap? PSHAW! Not that I ever used that tub, BUT I TOTALLY COULD HAVE.

The book tour is going amazingly well, way beyond even my wildest expectations. Physically I had prepared for the worst, but last week the only time I really started to feel my seven-months-pregnant state was on Friday afternoon when I rounded the corner to the baggage claim at Salt Lake International Airport and saw Jon for the first time in five days. I felt just like Leta does when she sees me at the end of her day at preschool, like I had been holding my shit together for so long, and finally I was in the company of someone I trusted enough to love me even though I wanted to cry. I quickly buried my head into his chest and was overcome with just how much I missed him. And loved him! And what was this strange feeling? I DIDN’T WANT TO STRANGLE HIM! Just look at what five days can do for a marriage!

We’d agreed that he would stay home with Leta and the dogs these first two weeks to ease the anxiety of everyone involved, and that if all pieces fell into place he’d join me on the last leg when I visit Denver and Austin. So, no, he hasn’t been with me at all and won’t be with me for the rest of the week. Now, what I’m about to say shouldn’t be taken the wrong way, although I’m certain a few of you will insist on doing so anyway. But, it feels so good to miss my husband. And not just because I get to sleep in a king-sized bed every night by myself free from having to dodge hairy bear feet.

(I did hear a rumor that to celebrate getting to sleep by himself in our bed the first night I was gone, he slipped on his Crocs and jumped up and down on my pillow.)

It’s just, in case you haven’t heard, we spend a lot of time together. By a lot of time I mean EVERY SINGLE SECOND OF EVERY SINGLE DAY. Most couples I know would have killed each other by now if they’d had to live this way for as long as we have. But Jon and I have found a way to make it work. We try to be respectful of each other’s space, and he routinely follows the number one rule of the house: NO TALKING TO ME WHEN I’M WORKING. This isn’t always easy for him, because the Armstrong genes are cursed with an abnormality that makes it impossible for anyone of that lineage to shut their mouths. It’s on the same chromosome that requires they spend three-fourths of their lives on the toilet.

I remember one morning during the first week that we were dating, we’d been driving in LA traffic from Santa Monica back to West Hollywood for about an hour and I had to turn to him, cup my hand to his mouth and say, DUDE. You’ve been talking THIS ENTIRE TIME. I WILL STILL LOVE YOU IN SILENCE. I mean, I understood very early on what I was getting myself into, and I married it willingly and eagerly. But then he could certainly say the same thing, and there isn’t enough room on a server that holds a terabyte of data to elaborate on what he’s had to put up with, starting with having to sleep with my elbows permanently affixed to his forehead, right up through the unbearable moodiness I inherited from my mother’s siblings.

(I wrote a book once wherein I detailed the various things I’ve thrown at Jon’s head. Funny thing, the advance for that book helped pay for therapy!)

So it feels really good to have all these emotions toward Jon that I don’t normally experience because of our proximity. I miss everything about him, even the incessant talking and bear feet. It’s a longing that is somehow invigorating, and once where I would have been annoyed that we’d talked six times already on the phone I find myself getting a text message and hoping it’s from him. I ache to get back to the hotel room from whatever I’m doing so that I can call and hear his voice. Which I am about to do right this second, call and see if he slept well, ask if I can interrupt SpongeBob to say hello to Leta, and then stop and savor this feeling of missing the weight of his body on the bed next to me.