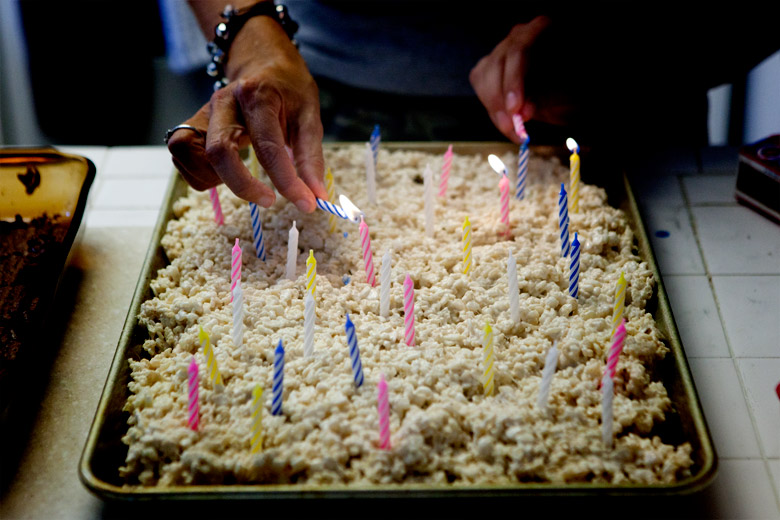 Yesterday was a holiday here in Utah, Pioneer Day, a celebration of the day Brigham Young and the Mormon pioneers arrived in this valley and said, here! Here is where we will marry all of the wives!

Just kidding. There were still some wives left back in Missouri.

To celebrate my family gathered at my sister’s for a huge late afternoon meal, and we took that opportunity to recognize all the July birthdays: mine and two of my nieces.

TANGENT (that will oddly bring us right back around to the first paragraph): Marlo has been making up stories about her daughter and her granddaughter, and then suddenly out of nowhere yesterday morning as she and I were stacking some blocks she looked up at me and said, “My nephew isth sthtuck in traffic.”

“What is your nephew’s name?”

She was clearly annoyed that I was not reading her mind and screamed, “HERCUMAH ISTH STHTUCK IN TRAFFIC!”

Okay. There is so much wrong with this but let’s just point out the two most glaring problems: one, I did not raise Leta to name a child Hercumah. Two, he clearly isn’t old enough to be driving.

And then this morning she said this:

Making Brigham proud, that one.

One of the nieces born this month is my brother’s second child. I didn’t think my brother would be there yesterday given very recent events. Let me back up for just a second. None of this is linear. I apologize. I think Marlo may be contagious. Like, “yesterday when I was born.”

My mother, stepfather, and my brother’s family drove to Cody, Wyoming over the weekend to spend some time with our cousins. I called my mom on Monday morning to have our daily “what is going on with you” talk and there I was going on and on about feeling overwhelmed because I’m behind on this, and I’ve got that over there, and there’s no time for this, and she sat there and listened and offered sympathy. And then when I was finished she said, “Well, your brother… um… your brother is in the process of passing a kidney stone.”

DO WHAT? DO TO THE MOTHERFUCKING WHAT?

Mom. MOM. Why did you not stop me? WHY? A kidney stone trumps everything but birth, Mom. In fact, IT IS BIRTH. He was giving birth to a kidney stone and I’m complaining about my broken Internet connection, Mom. IS HE STILL ALIVE.

This is my brother’s third run-in with this experience, except this time it didn’t pass like the first one in an hour, or like the second one in 45 minutes. No. This one stuck around for 24 hours. And he was in Wyoming. In the summer. In a motel room that hasn’t been updated since the Fifties. I was like, please tell me that you had Nickelback blasting on the stereo because this scenario ISN’T HORRIFYING ENOUGH.

Have you or someone you’ve known ever had to pass one of these things? Because the way he described the pain made me break one of the Ten Commandments and google it. And I guess I’m not alone:

Hiccups are apparently terrorists. Or the new Britney Spears.

So, yeah. There isn’t one single go-to thing that you can do to make sure you don’t ever go through this. Like, no where does it say, “If you cut out all of the salt in your diet, you will never get a kidney stone.” Or, “Be sure to eat a shit ton of broccoli.” But pretty much everything I found said that a lot of these episodes can be triggered by dehydration. And since I am the valedictorian of anxiety, I’ve been drinking enough water to drown a herd of buffalo since he passed that thing Tuesday morning, that thing that turned out to be the size of a black peppercorn.

Yes, Marlo’s head was much bigger than that, but he wins because I didn’t give birth in Wyoming.