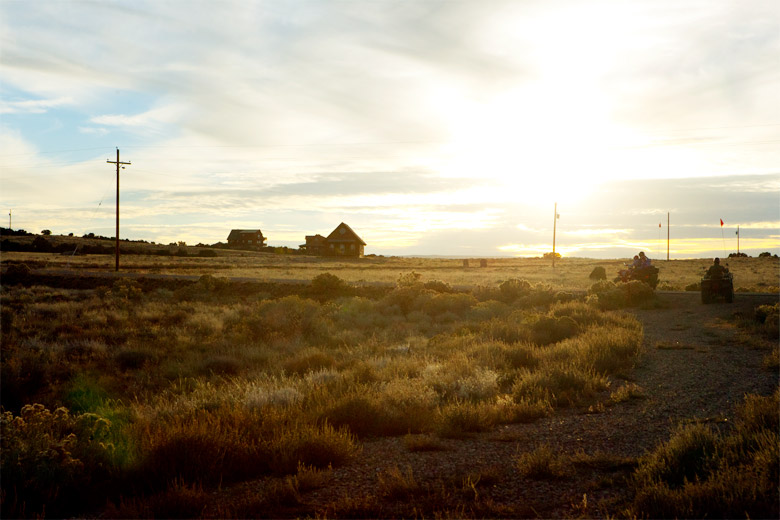 This post is brought to you by Carnival Cruise Lines.

I remember returning from a fall break spent at my mother’s cabin during Leta’s kindergarten year when another mother at school asked where we had gone on vacation. Leta gleefully blurted out that we had been to Grandmommy’s cabin, and that mother instantly perked up.

“It’s out in the high desert,” I answered. “Out in Duchesne.”

She acted like I had just spoken a foreign language.

“It’s in the Uinta Basin, near Roosevelt.” I explained. “Out toward Vernal.”

“Oh…” she said and paused for several seconds. “Well… I guess a cabin is a cabin anywhere, right?”

I suppose she thought maybe my mother had a cabin at Sundance? In Aspen? Vail? The Swiss Alps? Ha ha! NOPE! It’s out in the middle of NOWHERE! And last month before we drove out there again for Leta’s fall break she said to me, “We’re only headed to the best place in the world, MOM.”

And I think she really believes that. Because that kid was so amped to go there I thought her glasses might crack from either the velocity of her pulse or the pitch of her voice. Someone had to have been feeding her a constant stream of helium. Or just mentioned to her that her twin cousins Joshua and Noah would be there, too.

The high desert is a quiet, solemn landscape that is perfect for escaping the din of modern life. My mom takes the kids out there for quick overnight visits with her whenever she gets a chance, but because she removed the Internet connection it’s been hard for me to make the trip. And that’s unfortunate because this is exactly the kind of traveling I’m comfortable doing with my kids, I’ve figured out. I’ve created a convenient list of reasons why:

I’ve written here before that traveling with young kids is not my favorite pastime. Traveling by myself is laborious enough, and when you add in all their gear and potential public meltdowns it’s a recipe for sweaty armpits. Leta is really easy to travel with now that she’s nine-years-old and can take care of her most basic needs. Marlo? Marlo is getting there. She can schlepp her own backpack and lunchbox into school which bodes well for air travel, but last week she was eating a bowl of cereal and found one flake that had baked into another flake forming AN ALIEN FLAKE and not only did she refuse to continue eating but she also slipped out of her chair, fell dramatically onto the floor like she had been shot, and blamed it on the cereal.

But when she does get there, oh the places I WANT to go. A whole new world will open up, a world of foreign languages and warm beaches. A world of longer car rides, hotel rooms, help with pumping the gas (if I’m being honest that’s really why I had kids: built-in gas pumpers). It means planes, trains, and very recently I even considered BOATS. WHAT.

Over the summer my friend Kristen from Rage Against the Minivan told me she was headed on a cruise with her family OF FOUR CHILDREN THAT’S ONE TWO THREE I LOST COUNT. That’s seven more than I have? Something like that. And her youngest is Marlo’s age. And I just fell dramatically onto the floor and it’s all her fault. I was like, woman, you are far braver than I am. But then I saw the Instagram photos she was posting while there, heard about how easy it was when she got back, and I thought to myself MIGHT YOU RECONSIDER, HEATHER?

And the answer to that is YES I MIGHT.

The top ten places I’d love to take my kids once cereal ceases to hold the same scientific properties as Kryptonite:

1. Back to Destin, Florida where I vacationed as a kid.
2. Boston
3. Washington, DC
4. Edina, Minnesota to see our friends Chris and Carol
5. Somewhere in the Caribbean
6. San Francisco
7. Palm Springs
8. Memphis, Tennessee to show them where I grew up.
9. London
10. Vancouver

I know many of you travel often with your kids and don’t consider it a hassle, and some of you like me waited until they were old enough to be able to dress themselves without reenacting a certain traumatic scene involving water from the Wizard of Oz. What have been some of your favorite family trips?