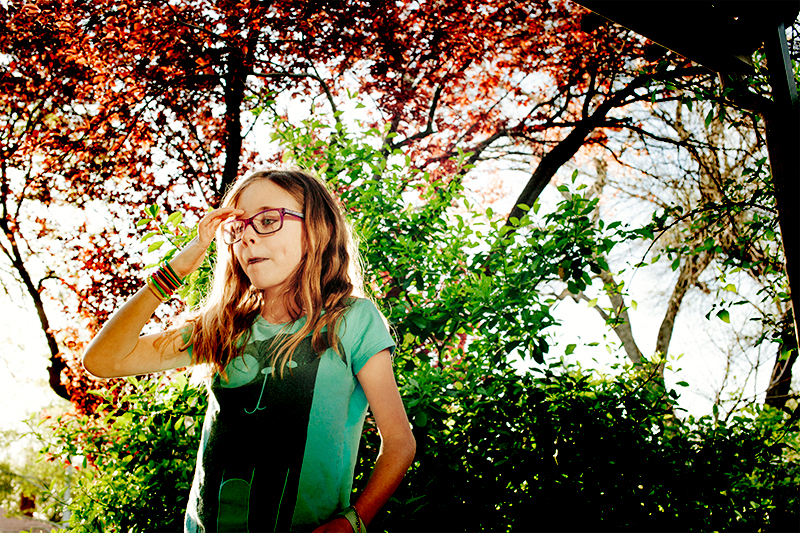 The front of the new house faces west—I know you are squinting and trying to figure out what is going on with Marlo’s mouth in this photo but hold on a second, Hannah—and after one of the many recent rainstorms we’ve had the setting sun hit the living room window just like this. It was like being on a movie set, the reflection so blinding but so perfect in relation to the shadows trying to emerge around it. From now on whenever I want to take the girls’ portraits I’m going to wait until this exact time of day and move them to this exact spot and say, “Look wistful, goddammit.”

She looks like she has lipstick on because she’d just finished a blue lollipop ring, and that stain lingered on her mouth and in and around each tooth for over two days. Yes, she brushed her teeth. Yes, I commented every other hour, “You do realize that your lips are still blue.” Yes, this is all my mother’s fault.

I don’t buy my kids candy—once your kids know they’re loved they try to take advantage of all sorts of shit, duh—but my mother loaded them up for Easter. Marlo likes actual candy more than chocolate, so her basket included four lollipop rings: a couple of blue ones, a red one and an orange one. Are those colors indicative of flavor? Are you seriously asking me this question? I would have no idea. None. I hate candy. However, if French fries came shaped as a jewel and sealed in a plastic bag I’d know enough to write a Wikipedia entry dedicated to its history and ongoing cultural significance.

About a week after Easter Marlo had not eaten even half of the candy in her basket, and Leta asked me if she could have one of the ring lollipops after Marlo had gone to bed. I shrugged and said she was old enough to make her own decisions that could include possibly disfiguring consequences.

The following morning as Leta was pouring bowls of cereal for them both, Marlo seized Leta’s arm and made the Cheerios scatter across the counter.

“You ate my orange ring lollipop,” she stated as a matter of fact more than accusation.

“I did what?” Leta asked, genuinely confused because she still had sleep in her eyes.

“Did you seriously think I would not know?”

Leta continued to stand there in silence trying to figure out why life was being so loud right at that particular second.

“It’s all over your mouth,” Marlo explained when she realized Leta wasn’t fessing up fast enough. “And it’s going to stay on your mouth for the rest of the week AND MOM IS GOING TO POINT IT OUT EVERY DAY.”

Well, she was absolutely right.