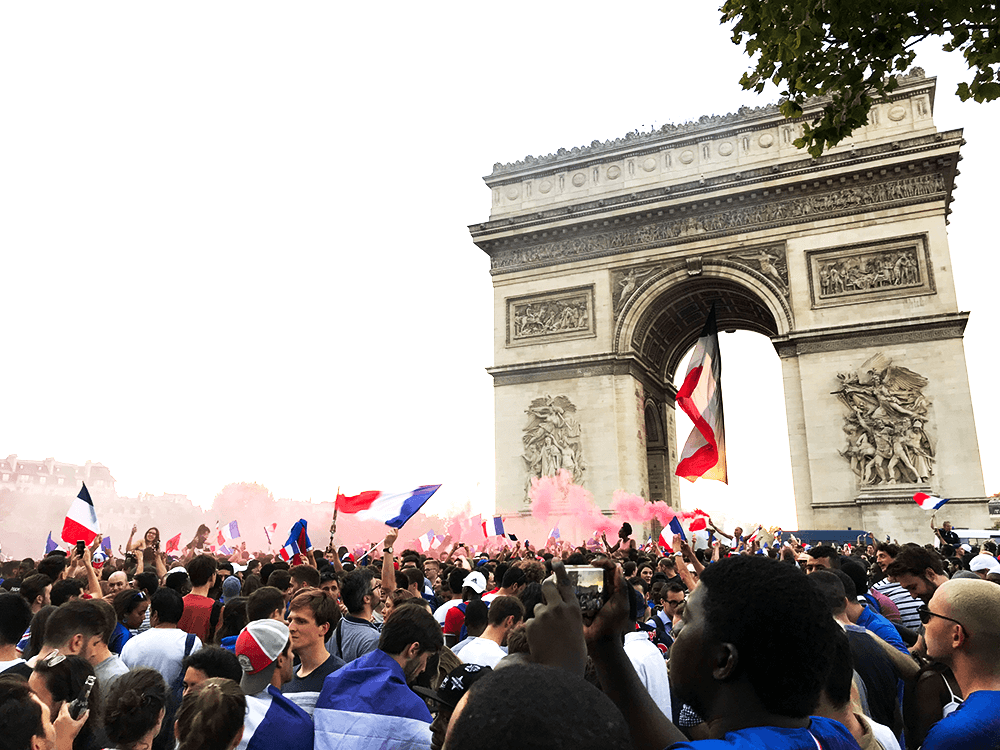 On Sunday I befriended a 20-year-old French kid named Etienne while sitting on the concrete railing of a walkway leading down to the Seine. We were gathered with hundreds of others in front of a relatively small television to watch the final match of the World Cup. Right, so. There’s already so much to unpack in those first two sentences, but let’s start with the fact that it is categorically stupid that I happened to be in France watching France play in the finals of the World Cup. It was a total accident, and that makes it even more egregious. Dumber, even, than last year when I stumbled onto le Champs-Élysées and realized, oops! Better get out of the way of these cyclists WHO ARE FINISHING UP LE TOUR DE FRANCE. 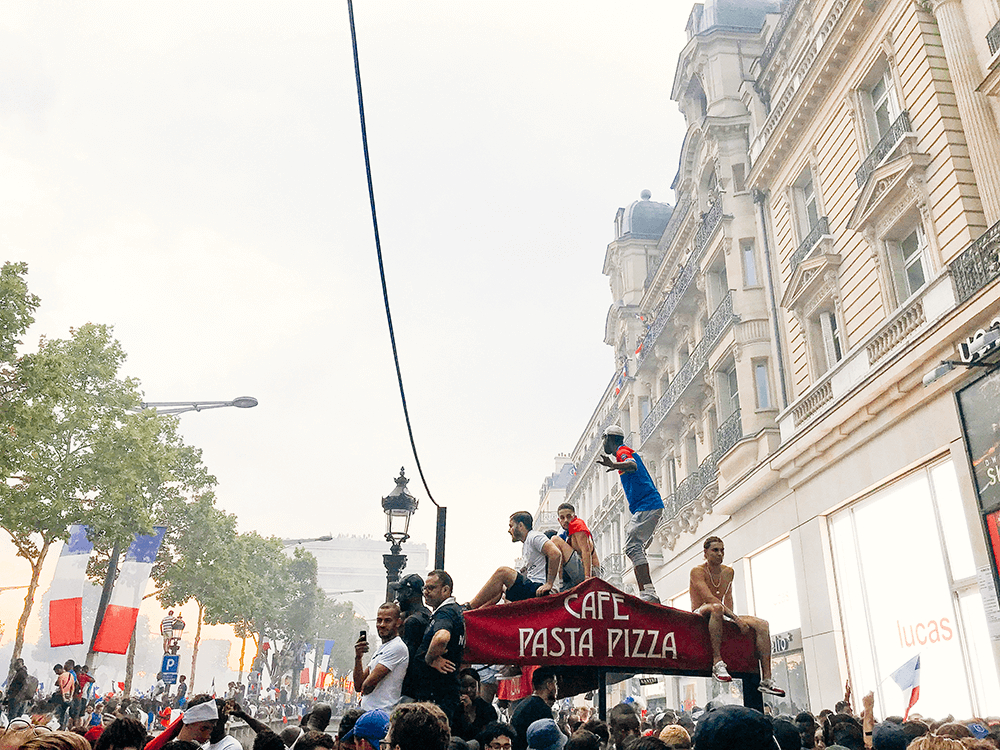 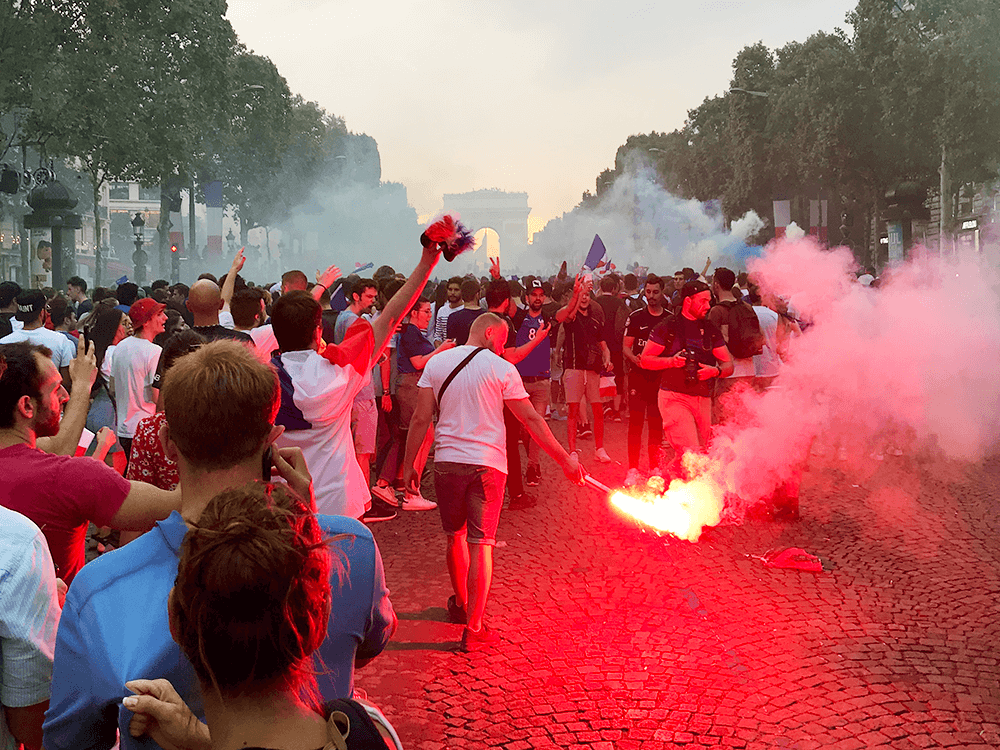 Next up: Etienne. You reach a certain point in your life when you’re having deep, meaningful conversations with people and suddenly you realize holy shit, I am old enough to be their mom. I know I’m not alone when I say that it’s thoroughly bewildering each and every time it happens. Because while I am a mom and I know I am a good mom, I don’t feel like a mom. Yes, there are moments when I see a kid in public doing shit they shouldn’t be doing and my immediate urge is to yank them off of their feet by the collar of their shirt to remind them that they were not raised in a barn—many, many, many of these moments—but a mom? Don’t those people shop for sensible pumps at JCPenny and carry around a wallet that doubles as a checkbook?

Etienne said he was only six months old the last time France won the World Cup, and I did the quick calculation in my head, realized he is 20 years old, and almost interrupted him to alert him to the fact that he was talking TO A MOM. Gross. Just, ew. There’s nothing to be learned from me, kid, unless you want to know how to chart a toddler’s bowel movements with expert precision. That’s the extent of what I have to offer. Oh, I’m also writing a book about how to make sure that your kids won’t eat anything that you cook. It’s called Have Kids and there are no words inside.

But he was super talkative about music and politics and what life is like in France and how he’s going to spend a year in Seattle doing an internship. And even though I’ve spent some time with a few locals already on this trip, he’s the first one who reminded me about the Gallic Shrug! IT HAS A NAME. I wrote about this gesture last year after I got home and several of you told me it is an actual phenomenon with an actual name. These people often don’t use words to describe what they are feeling, they just make a certain face and noise with their mouth, and it communicates all you need to know. The exact same noise can mean “I don’t know” or “I don’t care” or “Does it matter?” or “You have shit for brains.”

He kept doing it, and the way he used it reminded me why I love it here so much. He kept communicating, “But what can you do?” in reference to letting go of things we have no control over. Meaning, “Why choose pain when there are so many things other than pain to choose from?” It’s the same reason I fell in love with Los Angeles. This attitude: “Yes, I understand that you live in Manhattan and work 90 hours a week on Wall Street and are wearing one of the six Rolexes that you own. That’s great! No, really! I am very happy for you and your impending heart attack. But if you’ll excuse me, I need to walk my dog to the coffee shop in my pajamas. Also, I should finish up my screenplay but I’m going to take a nap instead.” 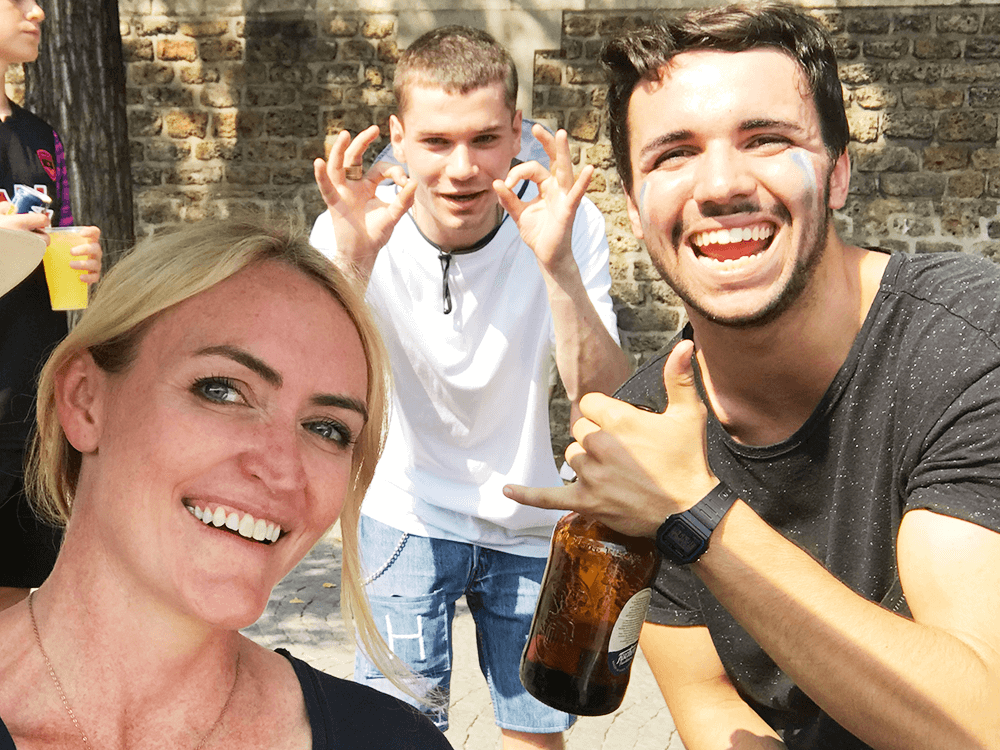 And finally: I spent that afternoon sitting along the Seine with a 20-year-old French kid and all his friends (and maybe someone else) watching the biggest sporting event in the world. And our team won. I was here for that. I was alive for that. I get into this a little bit on Instagram, but two years ago I thought my life was over. I couldn’t remember what it felt like to want to be alive. And because of that I keep a running tally of things I am so lucky to witness. And about 40-50 bullet points underneath “Marlo’s face when they brought her the mermaid birthday cake at Disneyland” and “Leta asking me if what she was feeling was what love feels like” is “Etienne reminding me that there can be so many things other than pain to choose from.”