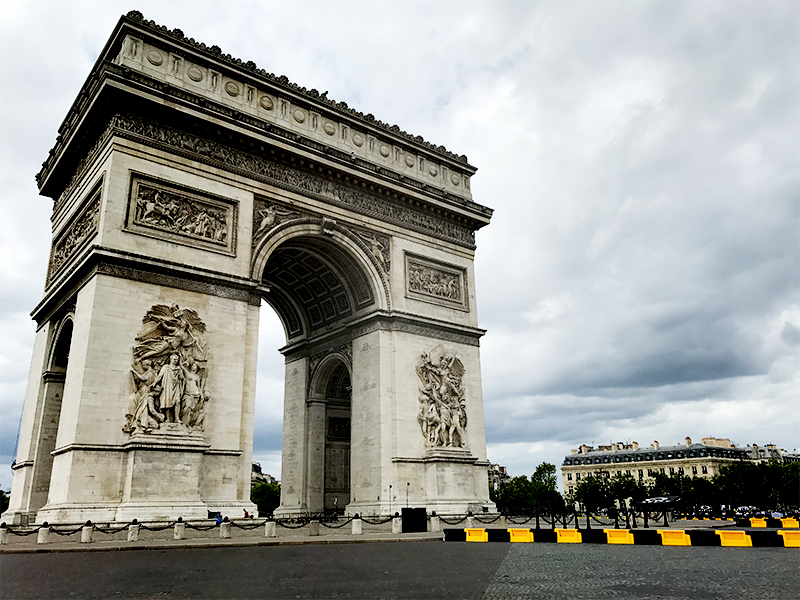 When I first got to Paris a few people heard my broken high school French and asked if I was from Russia. “Russe? Es-tu Russe?” they’d ask, or they’d just say in English, “Russian. You’re Russian?” And since we have capital What is Going On back in the states with LES RUSSES, I felt a little weird. Do I look like I’d interfere in a presidential election? Also, French dude? I’m not the one who peed on Trump if that is what you are thinking. That is totally what you were thinking!

Someone working at a cafe told me not to sit by myself out front by the street because I’d look like I was a hooker, but I have since been told several times that the person who gave me this misinformation is an asshole. The whole point of Paris in summer is to sit at a cafe next to the street for as long as you can get away with it, like hours at a time. At least four hours in a row, otherwise, why did you go to a cafe in Paris in the summer, dumbass? The staff does not care at all and you kind of have to hassle them for the check—“l’addition”—so don’t go sit at a cafe if you have an appointment for open heart surgery. You will be late and then very dead.

I have tried to begin every conversation here in French—sometimes successfully, usually terribly, always with a twang—but without fail people have been absolutely lovely about helping me figure things out. Back when I was in high school there were all these terrible stories about French people being very angry at Americans for coming here and being unable to speak the language. Which. Hm… hmmmmm… shall we take out the mirror, America, so that we can look at ourselves IN THE YEAR 2017? People going to a country and being unable to speak that country’s native language? How very gauche! UNCONSTITUTIONAL. TRÈS NOT OKAY.

Perhaps that was a generational thing, because no one has been like that here. Zero people. I have not had a single interaction like that in the last 20 days. Sure, I’m trying to speak French, but my attempts are horrible. Horrifying! All my pronouns are wrong, all of my verbs aren’t even words, and I even referred to my daughters as my cats because my head kind of goes blank in the pressure of the moment. I was looking at a children’s apron with a map of Paris on it and that person said, “This is for your cat?”

It feels like people now think, you know what? Who has time to punish someone? I’ve got my relaxing to get to, so how about I speak to you in English since I can tell you are very, very American. You will get what you need, and I can get back to relaxing. Deal? Here are your French fries, and when you want to pay the bill and leave you will be unable to find me. Learn quickly.

As friendly as French people have been to me, people here still don’t smile or make obnoxious noises or laugh so as to interrupt the table sitting three inches to the left. I was born and raised in Tennessee where you are taught to smile at the person who has just threatened you with a tire iron. Like, genuinely smile. Perhaps that person has just had a bad day! And a smile will perk them right up and off the brink of homicide! It works. Try it next time you’re in Memphis. You’ll be sitting with that person not ten minutes later eating BBQ on the river going, “Remember the tire iron? HAHAHAHA!”

Unless that person is an unapologetic racist. Don’t smile at that person. Grab that tire iron and shove it up their butthole.

I cannot break myself of this lifelong habit of smiling at strangers and now I wonder how many French women have called the police afraid that a Russian hooker is going to steal their precious baby. There are pregnant women and babies everywhere! All over the place! And I cannot help but giggle and smile when I see them. It’s automatic. SOMEONE PLEASE WRAP MY FACE IN DUCT TAPE. Make me stop! I must look crazed to these people, and if they hauled me in for questioning my French is so bad that I can guarantee I’d tell the cops, “Yes, I tried to eat the whole baby.”

This also means that there is no talking or smiling on the metro, and you guys. My friends were here for six days. And when we are together we don’t know how to deal with silence in public places other than to American It Right The Fuck Up. And no where was this more awkward than on public transportation. We just couldn’t stop giggling or making inappropriate sexual gestures, and I am pretty sure those gestures translate across all languages especially en Français, mais oui? Ou non? Perhaps even the jerk off motion is slightly more sophisticated in this culture, maybe you pretend to run your fingers up and down a piano like a Renaissance savant and roll your eyes as you’re recounting what happened, like, “This asshat thinks he’s Debussy.” And they call it The Claude.

We took a tour of la Tour Eiffel and then found ourselves at the Arc de Triomphe during the end of le Tour de France. And the crowds were so well behaved it felt like a Relief Society meeting. Like church. We were the only people making absolute fools of ourselves, and let us always cherish the moment when my friend Stacia pulled a pair of Tour de France men’s underwear over her jeans and walked into a restaurant to ask for a beer. A line of people stood behind her and looked on in absolute wonder? Contempt? Arousal? I don’t know, but all of them were agape and I looked at them and made a Vanna White gesture around her as she walked forth like, “This is the letter fucking Z, yes it is,” and we continued to have the most incredible day of our lives in Paris. Because this is Paris and there is no other kind of day to be had.

And then there’s this. First, without any context, just watch:

Second, we are at the fucking ARC DE TRIOMPHE at the end of LE TOUR DE FRANCE. It’s the championship game here, people. We didn’t plan to be here, we just found ourselves here and the absurdity of that is just stupid. STUPID. I am purposefully panning to get a shot of the crowd and the Arc to show where we are, because we are at the championship game, and we didn’t even buy tickets. They just let us in like we’re Beyoncé or some shit. Or maybe they really believed me when I said this:

I’ve been in Paris for less than three hours and have already been asked twice if I am related to Lance Armstrong. God. Fine. I am his mom.

ANYWAY. I am getting this on video, just shaking my head, like, I cannot believe life sometimes, and then I get to my friend Piper who has CLEARLY been brainwashed by the French. She’s like, um, no. I will not show emotion or participate in the foolishness that is the celebration of life. There is too much relaxing to do. Wrap it up.

And then suddenly, Stacia. STACIA. Did you behold her magnificence? It cast a shadow on that little flaccid arc, DID IT NOT. If you had any idea what Stacia has experienced in her life, any idea, then you would understand why that final flick of her head is why my friend Cami and I have a category of people in life whom we like to call “Stacias.” Mother Theresa was a more reserved kind of Stacia, but she was a Stacia. Princess Diana was one hell of a Stacia. Obama is a Stacia. Justin Trudeau? Definitely a Stacia. Oprah would be a Stacia except Stacia would never do a juice cleanse.

Stacia is like, we are here to American It Right The Fuck Up, and it doesn’t matter who is looking or what they think because we are alive to live this moment and isn’t life amazing. Yes. It is. It his head-flicking amazing.

If you are here and choose to be grumpy, then go back home, Larry. We don’t need you here. Leave your frowns, though, because I might need to borrow them when I get arrested.

I leave in less than two days and I am completely distraught. How does anyone ever leave this place. It will destroy me when I find out.