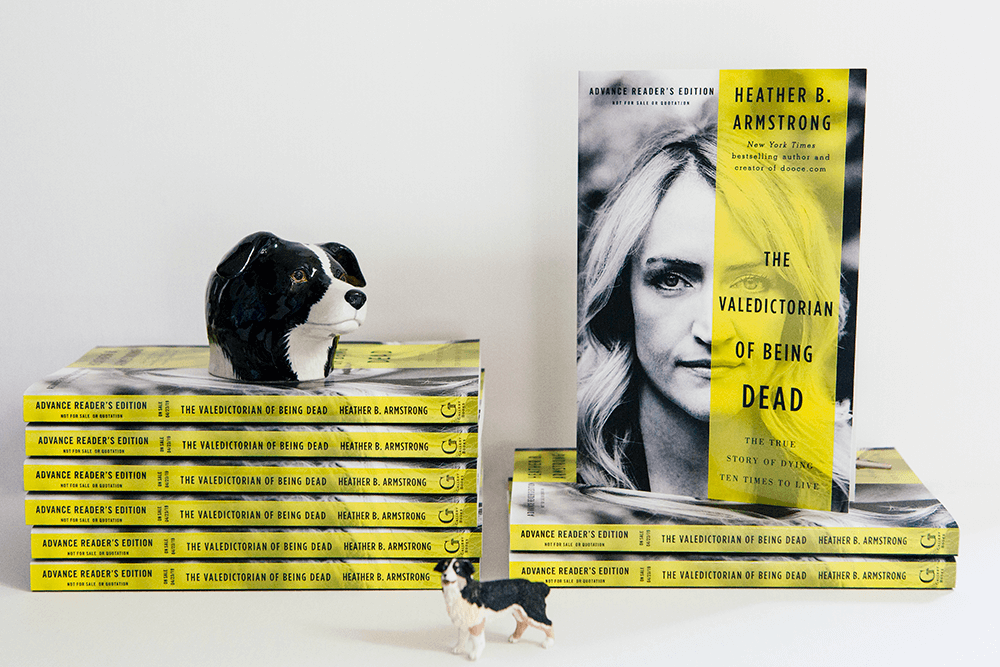 We are just going to ignore the absolute shit show that was January 2019—we’re talking wild west circus side shit show extravaganza delight—and get straight to it: I have a book coming out on April 23, and even though I’ve said this before, it bears repeating. I believe this is the most important work I’ve done in my life and I’m going to shamelessly plug it so that it gets into the hands of the people who need it most. Starting today Goodreads is hosting a giveaway of 75 advanced readers’s copies of The Valedictorian of Being Dead. This giveaway runs from today through February 11th, and during that time Leta turns fifteen years old.

Yes. You read that correctly. Frog baby is turning 15 and can get a drivers permit. Lord help my insurance policy.

Speaking of insurance, it’s time for our first tangent of 2019. Ready? LET’S DO IT! We have a bit of a stair situation in this house, and by situation I mean everyone including Coco routinely slips on a stair or two and imma let you finish but you’ll never guess who had one of the greatest slips of all time. Last Wednesday I was in a hurry to straighten up before the person who cleans my house twice a month arrived—SECOND TANGENT OF 2019 AHOY DO I DELIVER OR WHAT:

One, yes. I employ someone to clean my house and it is the best money I spend, hands down. She’s worked for me for over ten years and even though she routinely breaks things, sometimes things of great sentimental value—HOO THAT ONE TIME I CRIED FOR A WHOLE DAY—I continue to work with her because she’s fantastic and fast and often arranges Marlo’s 400 stuffed animals on her bed in such a way that Marlo thinks a Stuffed Animal Magician has secretly visited her room. Two, I once had a friend tell me that I was being somewhat racist by cleaning up my house before she arrived—he doesn’t remember this conversation at all—and after listening to his reasoning I sort of scratched my head and said, “Okay, I hear what you’re saying, but honestly I just don’t want her to walk away from my home thinking, ‘That woman is one giant fucking slob,’ and rush home to shower the ickiness off of her body.” I do it because VANITY.

Like, she scrubs my toilets and that is kind of intimate and in case you don’t have kids you might not know that kids pay no attention to where anything ends up when they enter the bathroom and close the door, sometimes without closing the door. If you have a kid you know that stray splatters of their urine have ended up on the walls in a house four miles away. This is biological science.

Anyway. Where was I. Oh, right. First: GOODREADS GIVEAWAY. Second: I was running down the main staircase carrying three glasses half-full of water (see what I did there?) in my right hand, my laptop in my left hand when the brand new pair of socks that came free with a set of bras I’d ordered myself for Christmas—was that detail important, I guess not, shout out to my book editor who miraculously squeezed a coherent narrative out of the jumbled mass of thought puke I sent him—the socks got into a heated argument with the carpet underneath my feet and the carpet was having none of it. Knocked both feet right out from underneath me. I mean, the carpet literally Nancy Pelosi’ed those free socks.

Good thing I didn’t have to pay money for those socks! I can now use the few dollars I saved toward the $250 bill I got in the mail after a visit in December to my relatively new doctor who, after I described somewhat graphically all the details of a gastrointestinal problem that is crippling my daily life, angrily wrote down on a piece of paper, “Eat more vegetables, like carrots and lettuce” and then walked out of the room. No, she is no longer my doctor. And no, my gastrointestinal issue has not improved even a little bit DESPITE MY EATING A FUCKING CARROT.

Back to the stairs, no pun intended since I landed on my back, the right side to be exact. Yes, there was water and shards of glass everywhere because those things went flying, but I held on to my laptop because it is as precious as a suckling newborn chimpanzee. I knew immediately that, well, things weren’t good. The laptop was perfectly fine THANK GOD but having suffered similar injuries in the past I’m pretty sure I bruised a rib and broke my tailbone. And guess what! You can’t really fix those injuries! Nope! You kind of just have to let them heal all by themselves and walk around trying really hard not to look like you’re smuggling seven pounds of cocaine in your butt.

I am realizing that I would be very bad at smuggling a tenth of that amount so, no, I can’t pick up that side job to make more money to pay for insurance.

And since I know this about these injuries I am not paying for the office visit or for the X-rays or for a new doctor to tell me to ice it and buy a butt pillow (I ALREADY OWN ONE!) and take enough ibuprofen to sink Noah’s Ark. I know I am going to get a Noah’s Ark-sized load of email shaking fingers at me, but my monthly insurance premium is fucking ridiculous and pays for nothing and I just added an extra $500 of therapy for someone else to my monthly expenditures. Oh, right! That insurance covers ZERO DOLLARS of mental health treatment other than prescriptions and thank god there are generic options for all that we take and here it comes, the volcano, the hurricane, the fucking apocalypse of my anger:

For all the gains we’ve made in terms of the stigma around mental health, we’ve barely moved millimeters in access to help in all areas of it. In emotional, physical, psychological, and financial support, WHERE IS THE FUCKING BEEF?

(sorry, younger readers, you will not get that reference, see Exhibit A)

So I wrote a book about an experimental procedure for depression—one soon set to go into its second phase of research—although it’s about so much more than that. Everyone who has read the book so far talks about the family aspect of it first, how mental health waves itself in and out of our relationships with parents and kids and siblings and friends. What that looks like and how it affects whether or not we ever ask for or get the help we so desperately need.

And the reason I’ve featured imagery of Coco in the photo above is because she was my constant companion throughout the entire book-writing process and, whatever. Ugh. I forgot to thank her in the acknowledgments, but since her “smarts” are different from the “smarts” Chuck possessed I don’t ever have to worry that she’ll purposefully shit in my bed for not getting the credit she deserves.

Wait, did I thank her? Wait… I THINK I DID. I DID! I thanked you, Coco! I might have also thanked your kennel where you sleep at night far, far away from my bedroom. And I may or may not have thanked the squirrels in the yard for taunting you once or twice.