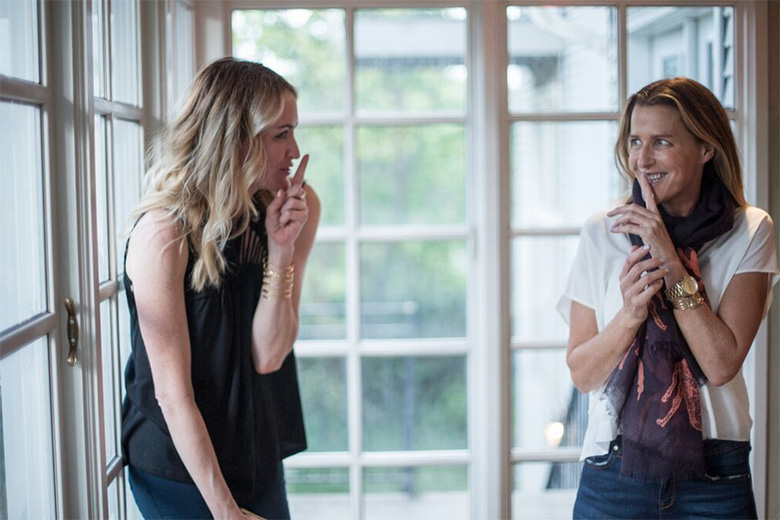 Oh my god, this actually happened this summer:

Okay, not technically in summer. It happened in May, and that is still spring and I’m correcting myself so that you don’t have to. Because when you take the time out of your day to stop and point out something as insignificant as that to me I have the desperate urge to hug you, ask if you are doing okay, and then lick my index finger and wipe it down your entire face.

India Hicks came to my house. She was in my house. Right over there in that spot in my living room (I’m pointing to a corner you can’t see but it totally makes sense to the zero people who are in the room with me right now). Breathing Utah air. We spent an entire day together, India and I, and she met Chuck. Oh, right.

That also happened this summer.

Right. In between trips to the Central Coast of California (where I coughed so hard as the result of the nastiest season of allergies I have ever experienced that I cracked a rib), Minnesota and Wisconsin, New York, San Francisco, Los Angeles, back to New York, Australia, Palm Springs, Arkansas, Missouri and Illinois and Portland. No one who knows me is allowed to say, “Well, at least you don’t have to travel this week!” out loud because some freaky Wizard of Oz phenomenon thing happens and an airport falls right out of the sky and lands right into my calendar.

Oh! Did I tell you that a stalker found out what hotel I was staying at in Springfield, Il when I was there to attend a wedding over Labor Day weekend? Yep. That happened. I know, we were talking about India Hicks STOP IT WITH THE TANGENTS ARMSTRONG, but you guys, that person scrawled a handwritten note and either delivered it herself or had it delivered to my room. I woke up that Sunday morning and found it shoved underneath my door. When I realized who it was, I was more than a little startled. Rattled, you could say. But I decided to leave it alone because I was leaving soon, and she is most likely the kind of person who would take the time out of her day to point out that I am being incorrect about the seasons, except much much much more thoroughly damaged. I wanted instead to give her a hug, but well, I sort of feared for my life.

Oh, and please, hold your tongue if you are about to lecture me and BLAME ME for that whole thing. No. I will lick my entire hand and shove my palm into your eye. Because I do not ever “add location” or enable the geo-location of the hotels where I am staying when I travel. Yes, I post about the cities I visit. I often post about where I will be before my arrival. It’s called SOCIAL MEDIA.

Welcome to this wonderful new world where everyone thinks they know everyone else’s business! You are going to LOVE being deliberately misinterpreted. It’s the best part of my day.

I may invite a little more attention to my whereabouts than someone who only has 500 followers on Instagram, but that is not going to stop me from being a goddamn normal human being and chronicling my adventures like I want to. Carefully, with thought and attention paid to my safety and happiness. Yes, a stalker found me. She found my hotel room. But I’m not going to let her scare me or steal from me an activity that brings me so much joy. Now come here and let me wipe my saliva out of your eye.

I was going to write about India Hicks but my friend Lisa Elin, a Creative Director & Writer who wrote about the whole event for City Home Collective (a local design group that sells, stages, and designs homes) did a fantastic job already. I will add that if India and I were in a competition for the worst potty mouth, she’d make me sprint the last mile.

Which reminds me. I’m running in the Boston Marathon next year.