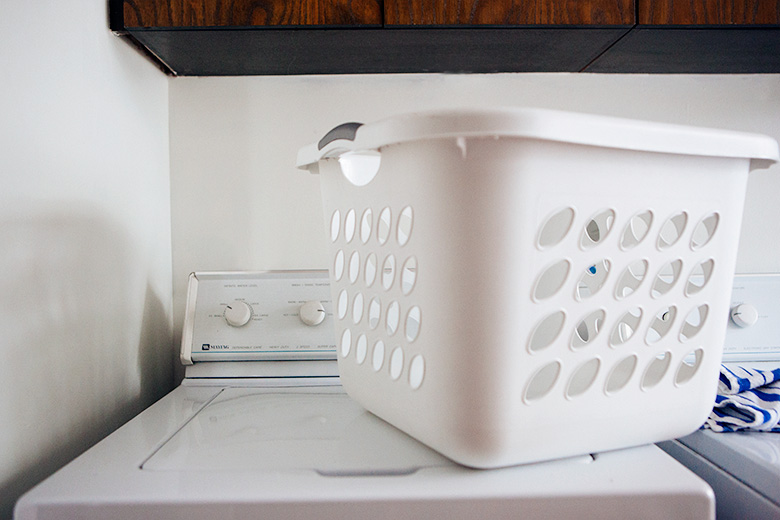 I normally try to tackle laundry at least two to three times a week to stay on top of the ocean of clothes that floods a home with two children. I was having a text message conversation with someone who doesn’t have any kids and when I mentioned that I was, yes, still doing laundry on a Saturday afternoon I had to explain that one child doesn’t just double the amount of laundry. No. Children shed clothing in much the same way reptiles molt skin and suddenly there are sixteen pairs of pants in the hamper in less than 48 hours.

“Why are there so many pants in here?”

“I needed that many.”

If “duh” was used as commonly today as it was in my childhood it would be the only word my kids would ever say to me.

Having children causes an exponential rise in dirty clothes, and when I fall behind it causes obvious problems. One, I end up spending days devoted to nothing but the washing machine and dryer, days I could be using for more productive things like continuing to ignore the laundry. Two, the kids run out of clothes to wear, and on Friday night this happened. Leta walked into my bedroom after putting on her pajamas and, wow, is it ever fun to watch as the DNA I passed to another human being unfolds.

“This…” she said with her hand on her hip, waiting for me to grasp the severity of the situation. “This is crazy.”

I was reading on my bed and looked up. Why was I reading and not doing laundry? The only right answer to that question would be that whatever I was reading was far more important than clean clothes. And I am here to tell you that Golden Globe predictions are pretty goddamn important.

The first thing I noticed was the very white flesh of her arms and legs poking like sticks out of a pair of flannel pajamas about four sizes too small for her. I grinned and she shook her head to indicate that I was not exhibiting the proper response.

“Your pajamas magically shrunk!” I offered.

“MOM,” she said through clenched teeth. “None of my pajamas fit.”

“‘None’ is not the right word here. The ones you have on? They do not fit. One pair does not fit. And they do not fit spectacularly.” There is never a wrong time to explore semantics.

I finally got around to the laundry the following morning (and following afternoon and following night and the next following morning), and as I was putting in a load of darks I came to the same realization I have come to the last ten times I’ve loaded the washing machine. God god, does Leta ever go through pajamas. There were, what, forty pairs of pajamas in her hamper? Is she getting up in the middle of the night and changing? Is she wearing them underneath her regular clothing? Are the pajamas mating and reproducing at an unsustainable rate?

And then there’s Marlo. I already knew that Marlo likes to change clothes about four times during the day on the weekends. But every time I do the laundry it’s like she’s invited every single kid in her preschool class to come over and dump their entire sock and underwear drawers into her hamper. There aren’t that many pairs of socks in all of Canada. Sorry your kids are missing socks, Ottawa. Somehow they ended up in Marlo’s hamper. I’ll get them washed and shipped to you so that your four-year-old can put on a pair, notice that the elastic at the top isn’t as tight as it was last week and then go rummage around in the drawer until they find a pair that will suffice for only the next ten minutes.