The girls and I just returned from a five-day trip to Austin to see family, a group including aunts, cousins, second cousins, third cousins, and… the one and only. He Who Made Me Gain Almost 15 Pounds In the Summer of 2007 Because of Homemade Gumbo. Behold: 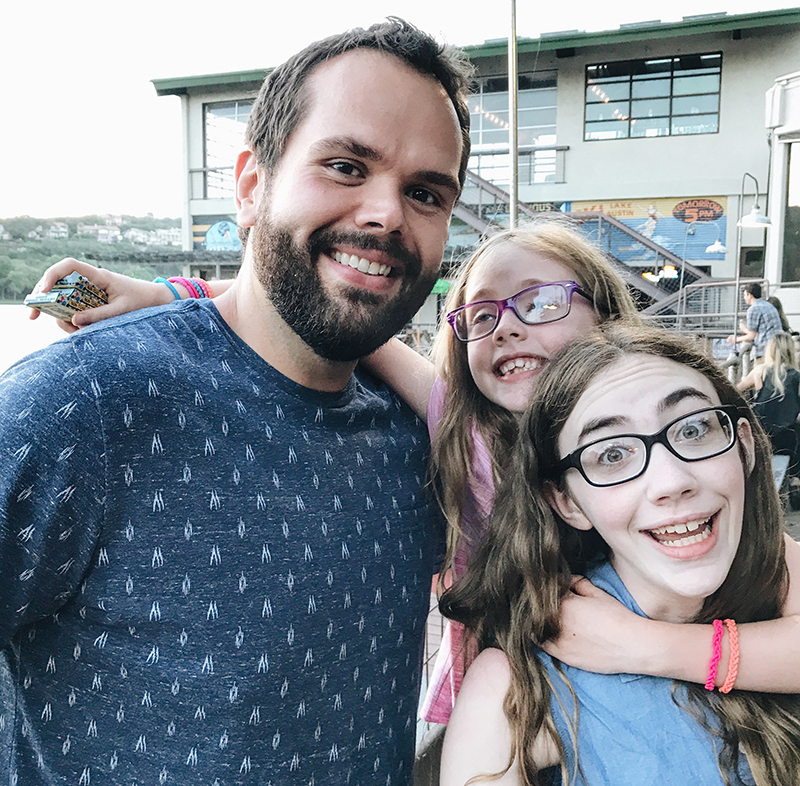 Yes, he grew up and got even more good looking and sorry ladies (and gentlemen) he is happily married to a very lovely woman. He’s got an amazing job in Texas and a fabulous home and two dogs who—let’s get real here—are as adorable as they come, but let us pause for one moment and refresh our memories. GOERGE! was Chuck’s favorite person in the world, full stop. The end. No one gets to argue with this or fight it in court. All y’all who thought you were Chuck’s favorite can step to the side right about now and bow down at this magnificence:

And then there was this.

I’m not ever letting up on that shit, you know this, right? Guns and healthcare and the sanctity of a woman’s sovereignty over her own body. Oh, and good ol’ institutionalized racism. Our country is just a giant apple pie, ain’t it? If only every human being could have her civil rights so valued and respected as that of a fetus.

Go ahead and unfollow. Be done with me. I’ll be here side-eyeing you when you come back tomorrow while trying to disguise your IP address.

I rented a place for me and the girls to stay, centrally located since the cousins would be coming from different parts of the state. And I rented a car because—didn’t I mention this—RED STATE. Public transit, I hear, is lacking in Austin, so I paid a premium for a basic car that I’d really like to go back and drive into a fucking tree. Because when all was said and done, instead of costing me X amount of dollars it cost me X$#!*FUCKED-RIGHT-UP-THE-POOPER$#!* amount of dollars.

The rental car did.

Not the child who handed me the bottle of water.

That she thought she had closed after taking a giant gulp.

But, in fact, she had not closed it at all.

Lemme back up a second, Taylor.

Beyoncé had the best minivan of all time.

When I approached the rental car desk, they told me to “walk out and choose any car from there or there or there.” I have not ever been offered this option before even though I’m one of those extra plus plus members, someone who is willing to pay a little more to be a member so that after a terrible flight into a city that is not my home I don’t have to fight ordinary citizens who experience no sense of urgency whatsoever. This is a hill I am willing to die on, this one:

HAVE SOME SENSE OF URGENCY, PEOPLE.

You share this earth with other humans. In the name of Jesus H. Christ, amen.

I get being in the moment, I really do. I will smell the flowers right there with you if you would first get out of the goddamn way. I have just spent the last nine hours of my life packing and repacking children, wrangling headphones and coloring books and snacks, maneuvering through TSA lines and being groped by someone who didn’t even have the courtesy to give me a complimentary nipple twist.

I’m fresh off of a plane where my child complained about being bored no less than 400 times. No less. I counted. Yes, I counted, it was the only thing I could do to remain calm around all the other passengers who were being bothered by the child sitting near them complaining about being bored. It’s called ZEN and THE PRACTICE OF IT.

So I pay extra to get to walk up to a rental car counter and have my name listed on a board next to a car stall. Except, not in Austin. In Austin, you get to choose a car! You’re going to lose your fucking healthcare in Texas, but you get to choose your rental car! What a deal! Don’t like having a hand up inside your uterus? TOO BAD. This is America. YOU get a car!

So you know what I did? I thought, I am on vacation with my kids, and since this is the only time I really get to spend with them this summer I may as well go hog wild and fucking mommy blog the shit out of this! So I chose the minivan. The only minivan from THERE or THERE or THERE and I even did a Rocky Victory Lap around it like, WE ARE BEING A VIRTUOUS MORMON FAMILYYYYYYYY! Minivan minivan minivan minivan! MINEEEE TO THE EFFING VAAAAAN.

Mind you, because of all the swimming we’d be doing and the fair skin we possess and the possible skin cancer that plagues me and my kids, we checked two bags full of shit: swimsuits, gear, swim shirts, goggles, special sunscreen, five days of clothing, special Hair Stuff because my kids have got a shit ton of Hair Shit. And since both of my kids were so tired from having been bored on an airplane—where they were flying though the air, in the sky, above the earth—they provided little to no help getting that minivan loaded. In fact, Leta needed to take a break and have a gulp of water.

You thought this tragedy was going to involve Marlo, didn’t you? Yeah, no. Nope! Leta gets to babysit until she’s 70 and then she still will not have paid off that happened next.

After a good 20 minutes of wrestling our luggage and the car itself—I had to pair bluetooth with my phone because I will not drive more than two minutes in a car without my music, and bluetooth is a shitty technology put on earth specifically to frustrate Heather B. Armstrong—we found our way to the exit, the place where you tell the dude that, yes, you want the fuel option, please, no way am I fucking up my life trying to find a gas station near an airport in a city I know nothing about while dealing with the stress of showing up to the airport for departure with two very bored and exhausted children, please. The stress of rental car return is real and valid and can someone please tell me exactly what year it was when parents became responsible for entertaining their children?

Because I would very much like to stick my finger in that year’s butthole. And not in a fun way.

Except… he wouldn’t check us out, and he was whispering on the walkie talkie with a supervisor for at least 10 minutes. I started thinking all sorts of things, like, oh shit. They have my ID and can therefore google my name and have you read about me on the internet? OH MY GOD. I am a horrifying person! If you take a step even one page past the first set of results, I am the Antichrist. There are thousands of pages on the Internet dedicated to how I have fucked up my children, and no wonder my ex moved across the country! He couldn’t stand being in the same time zone as that deranged woman. Have you read her latest post? It’s all over the place. She’s obviously not taking her medication. Also, here are the home addresses of every person she’s ever put in an Instagram photo, their places of work, the names of their children and ten separate ways you can stalk each and every one of them.

The Internet is fun!

I was trying to act cool about everything in my chill AF minivan. But, of course, when you do that you look exactly like a terrorist. In a minivan. He finally leaned down and asked, “Did you order a minivan today, Ms. Armstrong?”

“I did not, no sir,” I answered and thought that by being polite he would forgo going call the cops.

“Well, I hate to do this…” he began to explain while I shit my pants. “But this particular minivan is on hold for someone today. I’m sorry for the inconvenience, but can you go back and choose a different vehicle?”

Now, ordinarily this would be a rant about a shitty consumer experience. Because WTF?? You guys told me to go choose any vehicle from THERE or THERE or THERE, and this minivan fell well within those theres. Why would you put a car that is on hold WITHIN THOSE THERES? Someone please fix this user interface!

So that’s what “we” did, and I put “we” in quotes because, remember. My kids were exhausted from being bored on a plane—which is far, far worse than snakes on a plane—and had not helped me load the car in the first place. Now “we” were going to have to unload this car and reload another one. Remember that hill I died on? I experience urgency! I wanted nothing more than to be stationary and no longer en route, and it was this exasperation that blinded me when Leta handed me the water bottle she’d recently gulped from.

She had screwed the top back on.

I have had that phrase on echoing repeat in my head for a week now. Because in my rush to get all the luggage unloaded and reloaded into another car, I hastily stashed that bottle in my carryon bag. In which my laptop computer was resting innocently.

That was the last bag I loaded into the trunk of the other car, and as I set it on top of my suitcase I happened to glance through the small opening I’d left after shoving the bottle into it. And I saw the shimmering top of a small pond of water that had formed in the time it took to move it from one car to the other. That 32-ounce bottle of water was empty, its contents now swallowing my existence.

In case you didn’t know, Apple products are allergic to water. This doesn’t make any sense because iPhones are magnetically drawn to toilets. My cousins made several jokes over the following five days about how much rice we’d need to buy to dry out my computer, but this was after the diagnosis I got from the kids at the Apple Store: my hard drive had made it out alive, but the cost to fix my computer? More than our plane tickets, rental car and cost of lodging combined.

If anyone is looking for a babysitter, have I got a willing candidate for you.