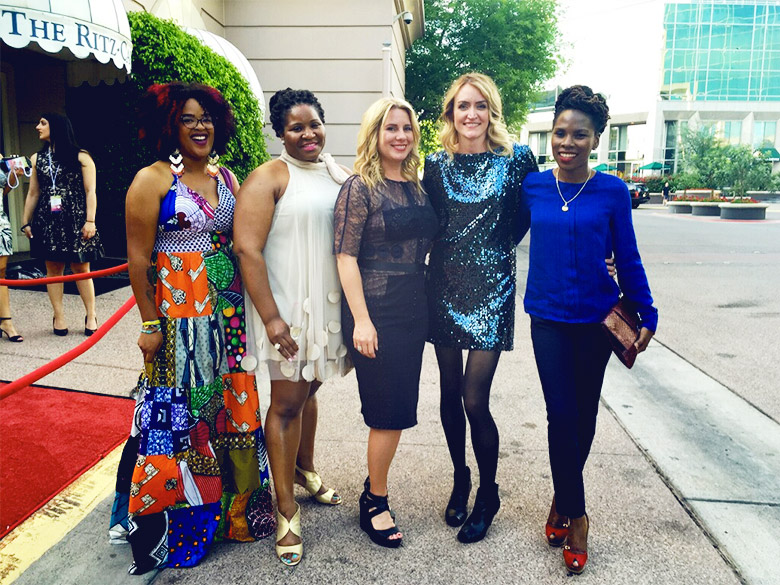 Someone just told me that he remembered one very specific line from a post I wrote when Leta was a year old, and he calls upon it in his life quite frequently. And I thought to myself, if “when you become a parent there is no such thing as a leisurely poop” is my legacy, then fuck yeah!

Last week while attending the Mom 2.0 summit in Scottsdale, I got to spend hours and hours with female friends who have been working in this space for years, colleagues who go all the way back before a banner ad ever appeared on a blog. Well, minus Luvvie. You’re familiar with Luvvie, right? She wasn’t born until we were all doing sponsored content for deodorant and tampons.

There were about seven or eight of us in my room one night when it hit me that she wasn’t even born when the “Thriller” video came out. Remember that afternoon? Sitting around our televisions that did not have remote controls and studying his every move and then afterward our souls were changed forever? SHE WAS NOT EVEN AN EGG WAITING TO BE FERTILIZED.

I’m sure other generations have done this, but we make these personal and emotional and intellectual connections with people only to realize, oh my god, you were not even alive when the police chased OJ in that white Bronco. Pop culture is deeply embedded in our generation’s DNA, and there are certain seminal moments that take up corners of our brains as much as national tragedies. I remember the look on my kindergarten teacher’s face when Reagan was shot. I remember what shirt I was wearing when I watched the video for “Thriller.” I remember the color of the carpet I was sitting on when Madonna told David Letterman that it’s good to pee in the shower. It’s like, where were you when you heard that Kurt Cobain had committed suicide? You probably remember the smell in the air when you found out.

You 20-year-olds will at some point in the future be having the most fascinating evening with someone and suddenly realize that the person who is making you laugh and think and alter your perspective was not alive when Kanye didn’t let Taylor finish. And you’ll be like, damn. For real?

One night eight of us decided to head out to dinner together. We were all going to try to climb into an UBER XL, but it turns out that they are only allowed to transport six people. So six of us climbed into the UBER that I ordered, and Kristen and Luvvie took a separate ride. The restaurant was only 1.8 miles away from the hotel, except our driver decided to take a detour. To Wisconsin:

Now, when I complained about it on Twitter–yes, I did indeed bully UBER on Twitter—I posted this map because it’s hysterical (well, hysterical after the fact as we were all genuinely starting to panic about four hours into the ride thinking we were being kidnapped). I purposefully left out the cost of the joyride because I didn’t want to have to sift through all the replies going BUT YOU ARE RICH JUST PAY THE DAMN FARE. But, seriously. 60 dollars. Sorry, y’all, but that demands this image:

While sitting at dinner (FINALLY) my phone started ringing, and when I didn’t recognize the phone number, I said out loud, “Chicago? Who is calling me from Chicago?”

Without missing a beat Luvvie yelled, “Better pick it up. Oprah is calling!”

I could barely hear the woman on the line through everyone’s laughter, but she introduced herself as UBER customer support. Ha! Hahaha! They’d seen my tweet and wanted to make sure everyone was okay because I had referred to it as a hostage situation. And that wasn’t much of an exaggeration. I explained that we were laughing about it now that it was over, and that I didn’t want anyone to lose their job. My biggest complaint is that instead of spending that time laughing around the dinner table we were all locked inside that car texting each other things like, “Did anyone pack a bat in their purse?” Or, “I have mace! I’ll pretend I’m applying it as lip gloss.”

Spending time with these women, most of us who do not live anywhere near each other, is a gift.

And you may see us throwing around a certain hashtag with each other that I need to explain. At the end of the meal when the server returned with our individual credit cards and bills, she stood at the head of the table and started reading off names so that we could pass them to the right person. When she got to the third one, she stumbled a bit, pulled the card closer to her face and said, “Vvvv… Vaaa…Vvvvvvvvvv…not sure I can pronounce this.”

We all thought, oh, Luvvie. She can’t pronounce Luvvie. I was sitting right there and offered to look at it for her, and when she handed me the card I looked down and read out loud, very slowly, “Valued Customer.”

Heather had lost her ATM card and her bank had issued their “valued customer” a temporary one.

We assured the server that we were laughing with her, and that we would not tell anyone about this. So we aren’t.

PS. UBER didn’t even refund the entire fare, you guys. They adjusted it and charged me $12. TWEHHLVE DOLLAHS. What the ever loving fuck, I don’t know, but they owe everyone who was in that car a goddamn pony.

PPS. If you say one single word about me being “scary skinny” I’m going to march my mother’s glorious ass straight to your house to knock some goddamn manners into your head. Got it?

PPPS. Retiring from blogging is doing wonders for my potty mouth.

PPPPS. In the name of Jesus Christ, amen.