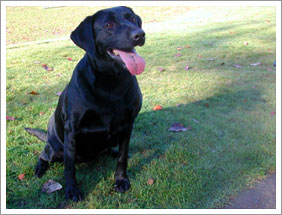 On Friday night my brother’s three year old black lab was struck and killed by a car. Her name was Pepper and she was the sweetest dog that ever lived.

I’m not quite sure how to articulate how profoundly devastating this is to me, and I’ve spent the last three days trying to think of anything and everything other than how much I loved that dog. What makes this even harder is knowing that my brother is going through a kind of hell right now that he has never known, and of all the people in the world my brother is the least deserving of this sorrow right now.

Our parents never let us own a dog or a cat in our childhood (I’ve written about that here before), but even if they had I don’t know that having had that experience would have prepared us for the relationships we have with our animals as adults. His three children are sad that Pepper is gone, but they don’t fully understand where she has gone, and my brother is the one having to choke back tears as he goes back to living life and taking care of the rest of his family.

My brother and I don’t have very much in common, other than the fact that we laugh a lot and that when we laugh we do it with our whole bodies. Something will tickle us — something totally ridiculous, like the time my husband had to take off the access panel to the bathtub plumbing because it was leaking water, and he realized that the guy who owned this house before us had designed this access panel in the most idiotic way, so idiotic that taking off the access panel meant that we couldn’t put it back on, and so now we have this access panel just sitting there next to the toilet, not attached to anything, not paneling the access to the bathroom plumbing, and it infuriated my husband so badly that EVERY SINGLE TIME he used the bathroom for three days straight he would say something like, “Who in their RIGHT MIND would design an access panel this way?” with the emphasis the same way each time he said it, and every time he went into the bathroom I would count three seconds, waiting for him to say it, and I’d hear him tearing at his hair, smoke pouring out of his ears, and then 3…2…1…, “Who in their RIGHT MIND…” I don’t know why I found his frustration funny, but I’d have to physically hold the laughter back whenever I heard Jon go into the bathroom for those three days. I still laugh about it, several months later, and sometimes I’ll just look at him and say, “No one in their right mind would design an access panel that way.” My brother latches onto similar things, and he will bring up a line from a movie he saw five years ago and laugh as loudly as he did the first time he heard it. And it probably isn’t funny to anyone else, but my God, if it doesn’t make us laugh and be happy to be alive for a few minutes.

My brother and I couldn’t have more opposite political or social views, and where I think his taste in clothing is conservative, he probably thinks I need to be beaten with a modesty stick. But we’ve grown much closer in the last few years specifically because we’ve both raised crazy puppies into tame, somewhat obedient companions, all without the consent or blessing of our parents. We both took the risk of adopting a wild furry animal and bringing it into our home, and we suffered the biting and the sleepless nights and the house-breaking and the cold snotty snouts pressed up against the window panes. And in return we found our most loyal friends — we found snuggling and belly-rubbing and unconditional love. We found the incomparable joy it is to see that tail wag when we walk in the door.

Pepper loved my brother more than any other person in the world. He was her care-giver, her master, her leader, her father. I can barely type these words right now as I think about my brother holding her head as she took her last breath and the soul-wrenching pain he suffered as he sat there cradling her lifeless body in the middle of the street. Were our parents trying to shield us from this pain by not allowing us to own pets as children? Would I even be able to get up out of that street if that had been Chuck?

I think the scariest part about it is knowing that I love something so much that I cannot fathom the possibility of losing it. Sometimes I look at my husband and my dog and I’m almost overcome with the realization that, shit, I have taken an irreversible leap into real companionship and commitment, and that the joy of the love I feel for them is as meaningful as it is because the loss of it would break my body in two.

I don’t know whether or not I believe in an afterlife, but I know my brother does and he’s taking great comfort in believing that Pepper is in a better place right now and that he will one day be reunited with her. I really like that idea, at least for the sake of my brother who has to get up again tomorrow morning without his four-legged child nudging his arm at the bedside.