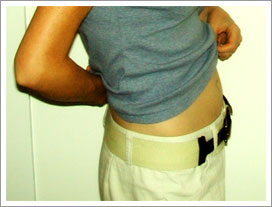 This week’s photo collection is the one in which I’ve gathered all the photos of all the bellies going all the way back to when I started taking pictures of it in August. I have officially decided that this will be the last week I take a picture of the belly because I’m not going to let this pregnancy go on another week. I should be allowed to make that decision, just like I should be allowed to say In this household, we don’t cry in the middle of the night. I’m all about rules.

However, I know that she is just sitting up there in the womb laughing to herself, shaking her head, going Woman, I ain’t never coming out. And if that’s the case she needs to be put into an immediate time-out for being so disrespectful as to refer to her mother as WOMAN. She can just go ahead and save that attitude for her rebellious teen years, years when she will discover Ann Coulter and Celine Dion in a defiant reaction to having been forced to read Al Franken and listen to Radiohead in her infancy. I know I will have failed as a parent when in her early twenties she calls me up and says, “I’d really like to see that new movie starring Kevin Costner. Oh, and by the way, I bought a gun.”

This gallery of belly photos pretty much shows my gut going from zero belly to full throttle belly in less than 60 seconds. When I go back and look at the photos from the early weeks I just want to scream at the woman in the photo: FOR CRYING OUT LOUD, EAT SOMETHING ALREADY. And then all of a sudden there’s this huge belly and looking at the transformation causes my face to shrink up in wrinkled discomfort and I’m like, god, that looks like that hurts.

Sources close to the belly confirm that it does indeed hurt very much.

Sometimes I worry that if I poke it lightly it might explode in a whistling fury of air or that maybe a 30 pound volcano of M&M’s might go spewing across the floor. A couple weeks ago my five year old nephew couldn’t take his eyes off the bloated growth, and I know he was thinking I bet she has at least a hundred pennies in there! And I just might use that as the excuse for all the weight gain, that it wasn’t all those Doritos I ate. It was all those pennies!