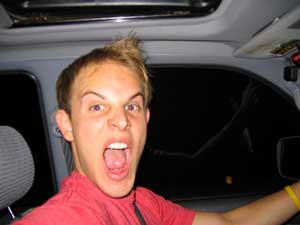 (Editor’s notes will be seen in italics)

Is it weird then when I came home from college for my Brother’s reception that there is more food at my apartment in Provo then there is here? I mean there is a surplus of wedding cake, but one can only eat so much. Also, why is there no shampoo here? My parent’s both live here, they are clean people… for the most part. Where is all the shampoo? Did my dad stop stealing the mini-bottles from hotels when he travels? Does Costco not sell shampoo?

(The first time I ever heard the words damn or shit was from George’s father’s mouth. His name is Danny. Yes, Daniel Boone, and he is the illustration in the PowerPoint template on the slide that says “Unwashed Masses.”)

(Is he trying to imply that I am that big of a jerk ass to my friends? Because he would be entirely correct.)

A typical day in my life consists of the usual college things: sleep, shower, walking to class, class, walking home from class, and homework. It’s those other hours in my typical day that make me so “interesting.”

(What you are about to see are actual pictures of actual students attending BYU. You may want to adjust your monitor so that their eerily bright countenances of goodness and virtue do not make you go blind or short circuit your computer.)

We usually play some Xbox at some point and time in the day. (Trent describes me as a “video game whore,” and I describe him as a bastard but who’s taking score?) (Um, George, that was you being that big of a jerk ass to a friend. I’m just saying.) After Xbox we usually spend some time out by the pool playing a game known as toothpick. If you haven’t played send me an email and maybe I can teach you the awesomeness that is toothpick, if you’re cool enough.

(George, why have you not responded to any of my emails?)

Anyways, I have no pictures of these right now, because I’m in Texas, and my friends are in Provo. So on to what I have actual proof of.

I live in an apartment complex that is at least 40 years old, and the management tries to be cool and throw “wild and crazy” parties. Wild and crazy in BYU terms means dancing to music that occasionally says damn or hell. (You guys should try dry-humping sometime. It’s pretty awesome and totally not mentioned anywhere in the Book of Mormon as a sin.) One of these such parties was cajun-themed. Oh the possibilities with a theme… why not have themed church meetings? It might actually spice up class a bit and the teachers wouldn’t be so mundane and boring. Anyways, this party took place out in front of my friends’ apartment, and they had some pretty good food. Food that will rank top 5 on the list of foods that I’ve had at get togethers. The reason I only speak of the food is because we left right after we ate it. TAKE THAT APARTMENT COMPLEX!

After the party was said and done and we returned from a fun-filled night of “wild and crazy” activities, we decided to hold a sleep-over under Bayou Bob’s, the birthplace of the Cajun themed extravaganza. Much fun was had, many Mormons were offended. Zack’s roommate actually CRIED because his girlfriend attended the sleep-over. CRIED! TEARS! It’s not like they had sex, we SLEPT! Some Mormons just aren’t ready for life outside Utah.

(Amen, amen, amen. I had this roommate once who took a biology class and they had to dissect a black man’s dick for an assignment. She came home HORRIFIED because she had never seen a penis before, and she couldn’t stop screaming about how SHE WOULD NEVER PUT ONE OF THOSE IN HER MOUTH.)

After the tears, and many stupid college students who wake up before 9am on a Saturday morning and don’t shutup when I give them dirty looks as they walk by our cozy sleep-over extravaganza, we decided to wake up. The end, nothing special I know, we’re idiots, I’m sorry for wasting your time. What can I say?

Xbox can only provide so much entertainment, so we found a roll of duct tape. You can imagine the possibilities. Duct tape, one of the world’s greatest creations, It can fix anything you say? WRONG! IT CAN DO ANYTHING! Need a tux for prom? Done. A guitar case? Done. A new backpack? A fancy bracelet? Done and done. Chaffing sold separately.

(Duct tape also comes in handy when in the seventh month of pregnancy the belly button begins to protrude. Oh, and it shuts up babies real good.)

We got a little bored and decided to do something… not boring. Thank you duct tape! Our friend DJ was in town to sign a contract for an apartment, so we figured we’d show him the ropes. After all, we were bored, and he isn’t Mormon (note: Mormons do haze Non-Mormons, even if they are friends, it’s a fact of life). He volunteered to be taped to the wall. Who does that? Some Non-Mormons just aren’t ready for life inside Utah.

(I was assured that no Mormon’s virginity or place in the Celestial Kingdom was harmed in the making of this story. But wouldn’t that have been cool?)

(P.S. George will be leaving BYU after this semester, not because he did anything wrong or got caught smoking my pot or because he is related to me, The Anti-Christ, but because, well, to quote Heather B. Armstrong, BYU FUCKING SUCKS. Yay, George!)