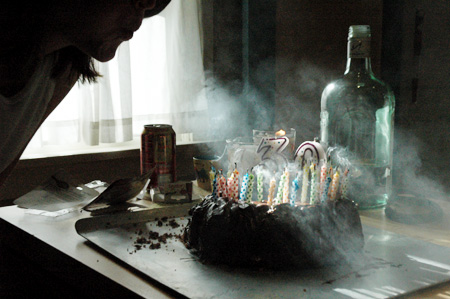 1. 1 can of coke to mix with …
2. Several shots of cheap rum
3. Two packages of candles because they only come in clusters of 20 (I am a package and a half of candles old)
4. Yosemite National Park shot glass bought when we eloped
5. One infant off camera who wanted to eat the candles and when told that she couldn’t eat the candles summoned all the dead souls of the world in one snotty bellow that blew a 20-foot hole in the ground
6. One neighbor passing by to drop off a shirt that says, “I heart Mormon Dick,” a shirt I challenged Jon to wear in three weeks when he has to help my father, The Most Conservative Person Alive, unload all of his furniture into a new house across town. Jon’s reply, “I value my life, no thank you.”

Then we went to see the new Willy Wonka movie, but not after stopping to grab two big burritos. Because it was my birthday I flagrantly violated one of the most important lessons I learned while living in Los Angeles: Never eat the whole burrito. It hasn’t ever felt so good to be so bad, at least not in the last 24 hours.

Here is a BBC piece on digital citizens, “people whose creativity has been transformed in the digital age,” telling the story yet again of how I lost my job because I used the lyrics of a Prodigy song to describe my boss, it seemed like a good idea at the time, didn’t it?

The one thing the article gets wrong is when I started this website. It says I started in June of 2001, but that’s probably because the reporter only saw my archives go back to that date. I actually started this website on February 27, 2001, but all of that content is sitting on my PC harddrive in the basement because it violates my blogging tip number two: Don’t write things about people in your life that you wouldn’t say to them face to face. I didn’t necessarily endear myself to my brother, an obedient servant unto the Lord, when I posted pictures of his kids and called them “adorable little shits,” thinking he’d never find my website. Damn Google to hell, I say.